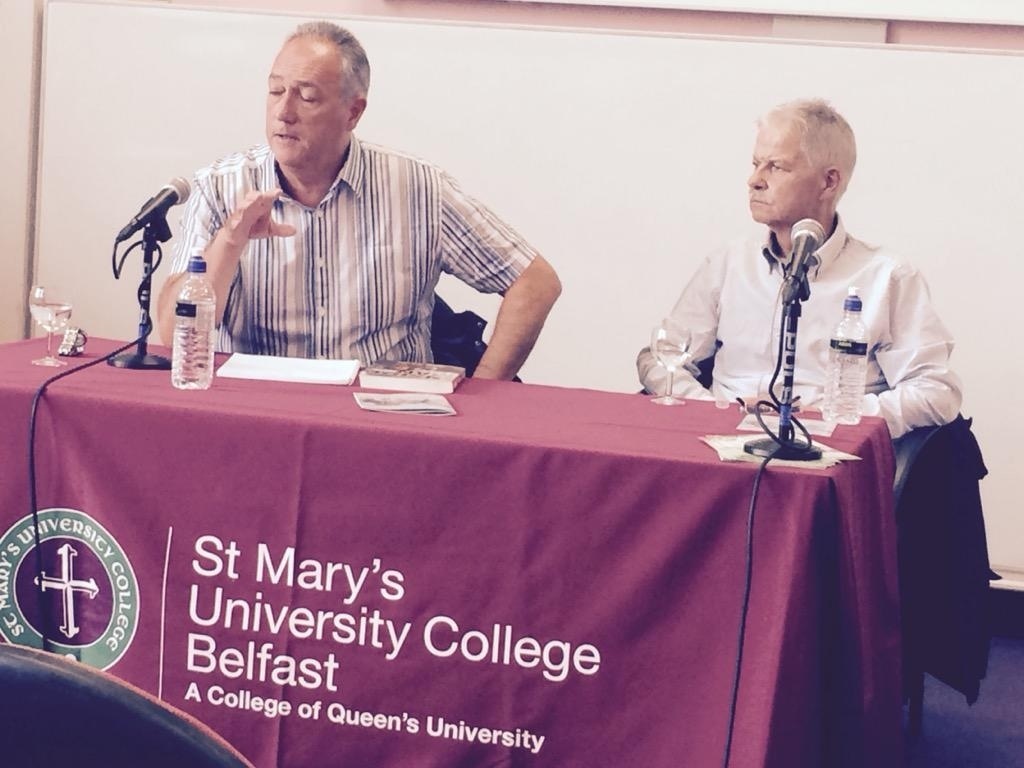 The two men sitting at the table said something about how much this place has changed.

In the conflict years they were in very different trenches.

Seanna Walsh’s background is in the IRA. He spent more than 20 years in jail.

William ‘Plum’ Smith from the Shankill is an ex Red Hand Commando prisoner.

Today they met and talked about Smith’s book ‘Inside Man’ – a conversation that shows what is possible and which sets a challenge for those at Stormont.

Smith’s book is the loyalist prison story, and he told his audience at St Mary’s University College on the Falls Road that the seeds of the peace process can be found in Long Kesh.

This event was part of the West Belfast Festival – Féile an Phobail.

In the page turns of this conversation, so it moved from Smith’s early involvement in the conflict, how he joined the Red Hand Commando, went to prison for shooting a Catholic man and ended up being central to the ceasefire announcement of 1994 and the talks that made the Good Friday Agreement.

“My generation was born into it,” Smith said – meaning the conflict.

Walsh described Gusty Spence as “the towering figure in the book”.

Smith recalled a quote from the veteran loyalist who died in 2011: “You either come out of prison a better man or a bitter man.”

This was a conversation that on occasions moved away from the serious – to other stories of being taught how to play bridge in prison and how a poitín recipe was shared by republicans.

But what was the biggest moment in this event?

Not the words, but just the picture of those two men sitting together – two men from very different backgrounds.

The significance of that image was something upon which another loyalist Ronnie McCullough commented from the audience, which also included Pat Magee whose name will always to be linked to the bomb at Brighton that came close to wiping out the Thatcher Cabinet.

“If it unravels, it will be very hard to put together again,” Smith said as he called for “proper” and “courageous” leadership.

The conduct of this event set a standard and an example for dialogue on Stormont’s hill.

If only politicians could engage in the same spirit as these former prisoners and enemies.