You are at:Home»News & Current Affairs»Opinion»‘Prisoners and Peace – the two don’t go together’ – By Brian Rowan
Social share: 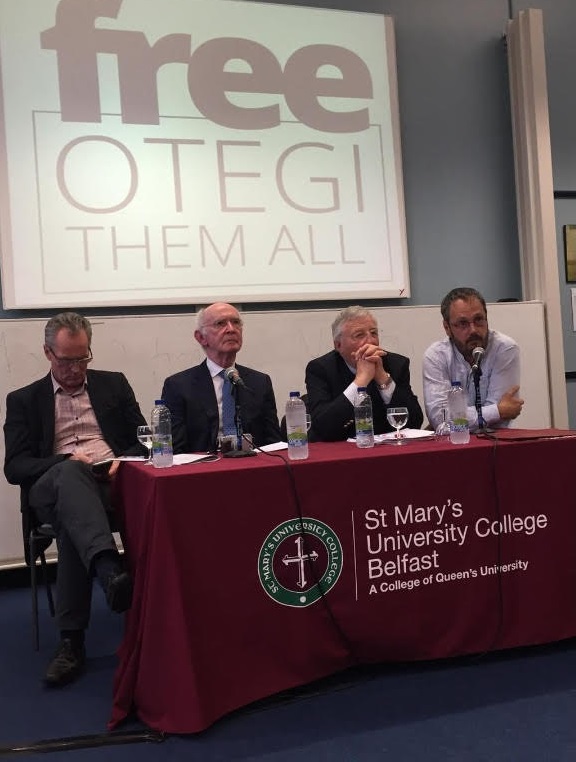 “We don’t have a peace process… we are working for peace.”

Senator Urko Airtza was speaking at an event in the West Belfast Festival – Féile an Phobail on the Basque situation and specifically on the issue of prisoners, and the campaign for the release of Arnaldo Otegi.

Close to 500 prisoners are dispersed throughout 77 jails in Spain and France.

Airtza was speaking on a panel alongside Gerry Kelly and Harold Good.

Change the names and the dates in a short film played before the discussion and we could easily have been talking about here in the mid-1990s.

The event chair Jude Collins made reference to the obvious parallels with our situation.

The Mitchell Principles on commitments to non-violence and dialogue that opened up possibilities here, have not yet managed to unlock the prisoner stalemate and other logjams in the Basque Country.

Gerry Kelly made the point that “no two struggles are the same”, but there are those similarities.

The Basques, he said, were “still looking for a sign” that governments will move to a process of conflict resolution.

His observation from Belfast was, that rather than using “a huge opportunity” for peace, efforts were still being made to achieve victory through a defeat of the prisoners.

The former Methodist President Harold Good, one of the wise owls of the peace process here and an occasional visitor to the Basque region, took the audience back to 1889 and debates and discussions back then about “what is a political offender”.

Then he read them through to a report commissioned by the Northern Ireland Association for the Care and Resettlement of Offenders (NIACRO) in 1995.

Ahead of political negotiations, this report researched international contexts for prisoner releases as part of peace.

It brought valuable fact-based information to the debate.

And, a few years later, as part of the Good Friday Agreement negotiations a Commission became the process to facilitate the releases.

The churchman told his audience that it is important not to go to international conflict zones and “preach” solutions.

And what is obvious is you can’t have peace and prisoners.

The two don’t go together.

In government, Tony Blair came to understand that and, once he decided on a two-year release programme, then everything else became a formality.

“The campaign from the Belfast Basque Committee is focused on the release of peace-maker Arnaldo Otegi,” Caoimhin Mac Giolla Mhin told the eamonnmallie.comwebsite.

“This man has been the persuader for peace, and yet the Madrid Government still have him incarcerated for being a member of a political party,” he continued.

“I think it’s very important that there is international pressure on Madrid, who are refusing to move the process forward.”

He said, as a first step, the prisoners should be brought closer to their homes and families and that a subsequent release programme should follow.

It took several years here and long negotiations to achieve this – and it is taking longer elsewhere.