You are at:Home»News & Current Affairs»Opinion»‘Oh Gerry Boy, The Trees, The Trees Are Falling’ – By Jane de Courcey
Social share: 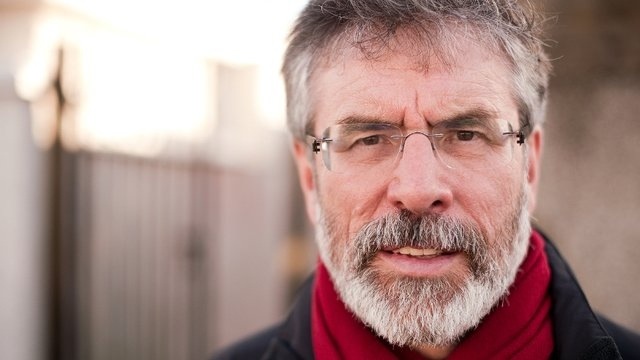 The wheels are coming off the Republican wagon – to the extent that Gerry’s jalopy is beginning to look like a tired old charabanc.

Leaving the collateral damage of recent gun-led events aside, Republicanism has been exposed as hypocritical and hysterical in its unending criticism of Loyalists and Unionists.

For years, Republicans have claimed the moral high-ground in a battle of political correctness in which they try to portray Loyalists as intellectual minnows with a penchant for occasional savagery.

Blame for this demonisation of the PUL community should not be left at the door of Sinn Féin alone … the SDLP and ‘middle-of-the-road Alliance Party’ can hop onto a bandwagon quicker than a Calais migrant jumping into a lorry.

But Republicans do it with gusto, squealing with ill-disguised delight when some moron in a Loyalist area decides to throw a brick through the window of a hard-working Polish family.

There’s the underlying message that Loyalists are hate-filled xenophobes, wedded to racist ideology and determined to purge anyone who doesn’t have the right accent or skin-colour from their midst.

Of course, racism would never happen in a Republican community…

And then there’s that horrible sectarian graffiti, warning Catholics to keep out and suggesting that those who cleave to the harlot of Rome are not welcome.

Indeed, this unpleasant concept did make an appearance in July, when the slogan ‘Taigs Will Be Crucified’ was daubed (bad graffiti is always ‘daubed’) on a wall in Belfast.

I’m sure that most Loyalists will agree that it was wrong, it was vile and it did a great disservice to the vast majority in the PUL community.

Of course, sectarian graffiti would never happen in a Republican community…

And then we have the bonfires, hate-filled celebrations where Loyalists burn Tricolours, election posters of SF candidates and … em … more Tricolours. As far as I’m aware, no actual Sinn Féin candidate has ever been burned on a boney.

And rightly so. Yet SF, the SDLP and ‘middle-of-the-road Alliance Party’ types line up to castigate Loyalist bonfires on all-sorts of pretexts, ranging from carbon dioxide output to grass-damage.

I would respectfully suggest that the CO2 output in an average Alex Attwood address during monitoring-round debates at Stormont is more than that of the entire bonfire night emissions.

And when it comes to noxious exhalations, Sinn Féin is close to having a monopoly on Northern Ireland’s annual methane output.

Of course, it would never happen in a Republican community…

So there we have it. A simple equation. Republicanism = nice, politically-correct immigrant-loving goodness and Loyalism = knuckle-dragging barbarianism with an obsession for burning things

The problem is that a few who might describe themselves as ‘Loyalist’ have endeavoured to live up to the stereotypes and in so doing give the entire PUL community a bad name. Shame on them.

But in the forest of politically-correct shibboleths, some big Republican trees have been falling. Which reminds me of that wonderful and unanswerable question: ‘If a tree falls in a forest and no one is around to hear it, does it make a sound?’

Racism? Take the case of black writer Tim Brannigan, a time-served Republican whose home came under attack during the anti-internment bonfire celebration in West Belfast recently.

Speaking to the BBC, he said: ‘I went out the front and I could hear them shouting and they were shouting “get out you black bastard” and they used the n word the whole time and laughing and shouting my name the whole time.’

Graffiti? Newtownabbey unionists were reminded that they’d be best not trying to get houses in a new development when Republican wall-scrawlers declared that Protestants would be ‘bombed, burnt-out and shot’.

Some claim that this is an adjunct to ethnic-cleansing of Protestants in greater North Belfast.

Bonfires? Republicans hate bonfires so much that they wouldn’t have them about the place. Right? Not so for the hate-filled Cregganites in Londonderry (Derry if you wish!) who not only torched Union and Ulster flags, but a stolen Poppy wreath.

The idiots who did this might be overlooking the fact that their great-grandfathers fought in WW1 but for them the Poppy is something to hate. There are also reports that they burned an effigy of a British soldier.

Would those responsible for the attack on Tim Brannigan, the Newtownabbey graffiti or the Londonderry bonfire claim to be Republicans? Most likely, just as those on the flipside of hatred’s tarnished coin claim to be Loyalists.

So let us no longer accuse so-called Loyalists of having a monopoly on racism, sectarianism or outright hatred for ‘the other sort’. Republicanism unmasked is just as nasty as that which it purports to oppose.

Sshh … is that the sound of a falling tree? Or is it just Gerry’s jalopy driving away from the truth?