You are at:Home»News & Current Affairs»Opinion»‘An Irishman stands up for Cromwell’ – By Patrick McKeating
Social share: 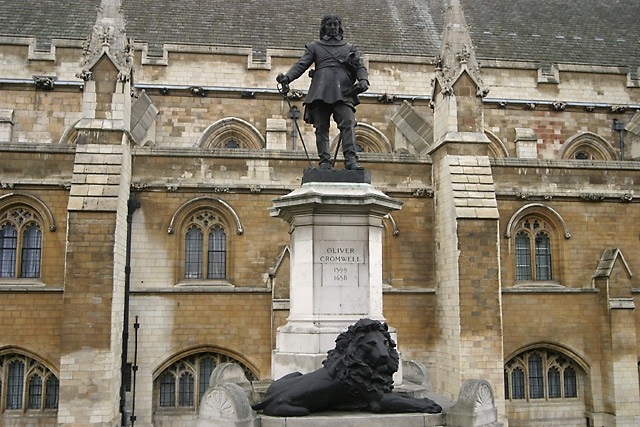 Two and a half years after dying amidst the worst thunder storm England had experienced in years, his rotting body was unceremoniously pulled from its resting place, put on trial, dragged through the grotty London streets to Tyburn where his head was hacked from it’s body then placed on a spike in Westminster for all to see. After all Oliver Cromwell was guilty of regicide, he rigged a vote to have Charles I executed, he promoted parliament yet consistently undermined democracy and upon his death England’s capital erupted into a party which lasted for two days. But why then was he voted in the top ten of the greatest Britons ever and why is he hailed in his homeland from people in all walks of life?

To begin with, Cromwell was the first of the ‘ordinary men’ to lead a country and lead it well. His ancestor and fellow ‘ordinary man’ Thomas had pulled the strings in Henry VIII’s administration but was largely invisible to those outside the establishment. In a time when the balance between monarch and parliament was tipped by the incompetent Charles I Cromwell emerged as an astute political and military leader whose career began in earnest when he was well into his forties. On top of that he only promoted men based on merit not birth which drew disgust from the Royalist ranks but admiration from those not savvy enough to be born into the landed gentry.

As a leader he was also somewhat ahead of his time in his approach to finance. Following the civil war he knew that what England required was stability alongside wealth. To facilitate this he extended his religious toleration to Jews with his Readmission in 1656. This was primarily a financial move as it opened up commerce links with Amsterdam which in turn opened up trading possibilities from the East to West Indies. He actively encouraged the fledgling stock markets which were developing in the fashionable coffeehouses within the City of London. He also briefly abolished monopolies and opened up previously closed shops such as the East India Company to competing individuals in an effort to break with the tradition of favouritism often stemming from the monarch.

His foreign policy was calculated with a long term vision. In the first twelve months of his personal rule of England he signed treaties with Sweden, Denmark, Holland, Portugal and France. This provided the opportunity to not only embrace peace and develop trading partnerships but to expand the navy and stabilise the state. In war with Spain, admittedly pursued largely for religious reasons, England gained the sugar rich colony of Jamaica and as a result took tentative steps towards becoming a permanent player on the European scene.

Ultimately Oliver Cromwell provided England with stability unseen for 80 years, he showed that a system governed not by the lottery of monarchy but those in power on merit could flourish, but most importantly with his commercial, military and foreign policy achievements he laid the foundation upon which an empire would be built.

Social share:
Glorious Revolution history ireland Irish history monarchy Oliver Cromwell republic
Previous Article‘Hype and headlines will not help the victims of the past’ argues Mark Thompson of Relatives for Justice
Next Article ‘Oh Gerry Boy, The Trees, The Trees Are Falling’ – By Jane de Courcey