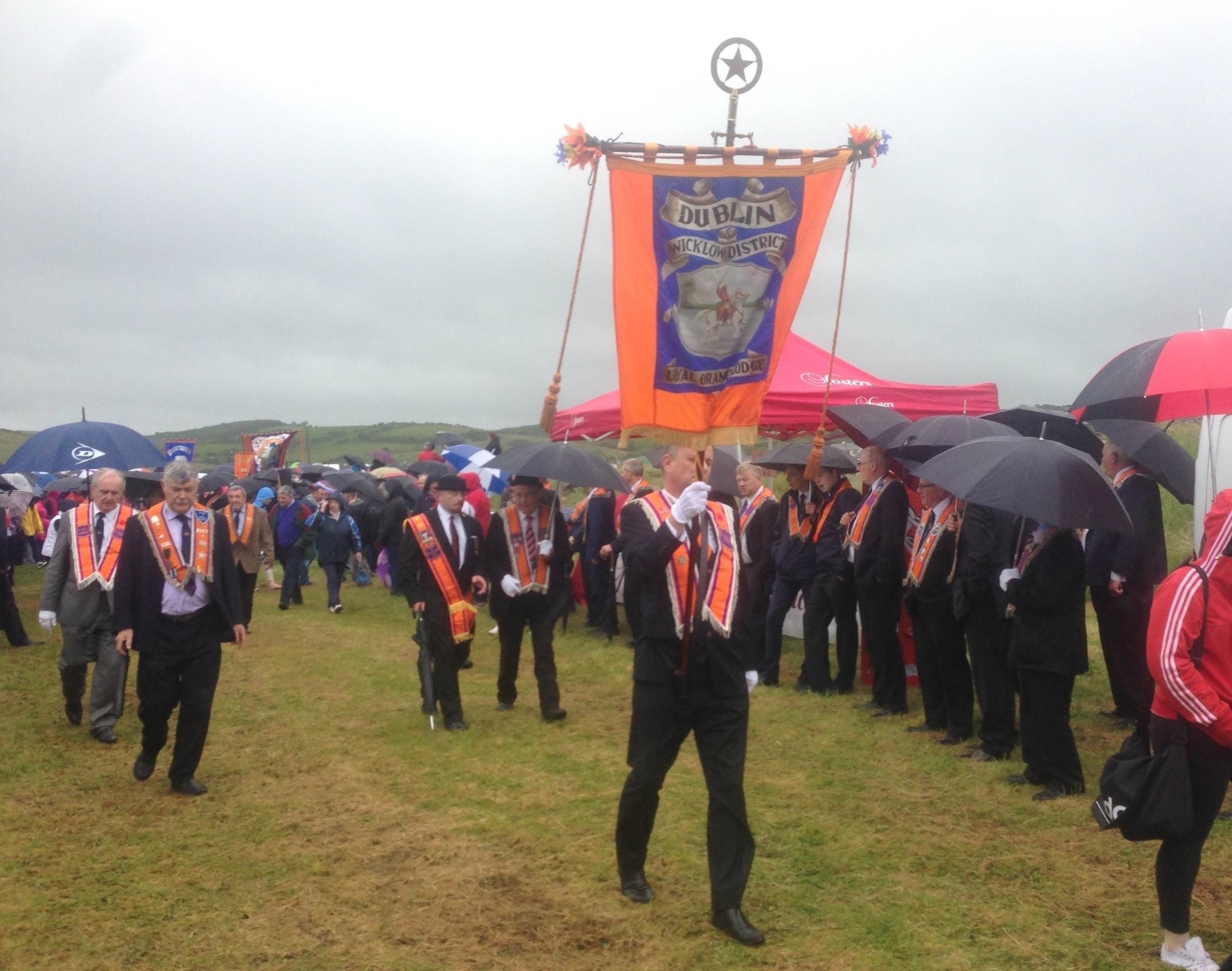 I have no connection to the Loyal Orders. I’m not the Green of the Gael, rather very, very pale Orange. I have a Protestant inheritance, Church of Ireland and Presbyterian, which means I watched bonfires, brethren and bands growing up, seeing no ill at all.

I’m a Protestant atheist, a cultural Calvinist. This is not an oxymoron, think cultural Jewishness; the Reformation culture of individual autonomy, enterprise and curiosity. Shaw and Wilde were Irish protestants but entirely irreligious.

The 12th of July is part of my culture, regardless of what ultra-Protestant, Lundy-hunters say. The key thing to know is, under the unionist caste system, my station in life was to spectate, not participate.

Every year I sat with my family at Drumglass Park on the Lisburn Road opposite Barnams, the famous ice-cream parlour. We sat on the large wall. I was bought a drum an a child’s band pole. The day always finished with a gravy chip. As I grew up I became aware of the more unsightly and undignified minority aspects of marching that mars the upstanding majority.

“Lapsed Protestant” and Northern author Glenn Patterson said he went through 3 stages on parading. From “adolescent enthusiasm”, to twenty years of “absolute hostility”, to “something-like indifference”.

Those who reject Orangeism carte Blanche are exactly that, juvenile. I went from stage one to stage three (plus a little extra enthusiasm) on the Glenn Patterson scale.

I criticise loyalism and the Loyal Orders, that doesn’t mean I’m against them. Being critical of loyalism is not anti-loyalism. Solidarity is not lost by calling out misconduct and prejudice. It is eminently possible to be fiercely critical of aspects of loyalism without hating loyalist people. It is the accretion of unexamined habits that inhibit progress. To use the words of Samuel Beckett, if I cared less for Orange and loyal culture I would simply say everything was A-OK.

The Loyal orders have many shades, only a minority of a minority are incendiary Orange.

The rural-urban split in marching culture indicates this. On the Twelfth July 2014 I spent the morning in Belfast, the afternoon in Armagh with a Dubliner. My guest Ted, like I, was startled by the discordant contrast. The rural parade was calm and unanimously dignified; The urban was marked by pockets of prodigious drinking and menace. Here there is a lesson to be learnt.

Last year I went rural, this year I wanted to experience a Southern Twelfth – The annual parade in Rossnowlagh, County Donegal, Republic of Ireland. I believe this fixture is a lesson and a bellwether for the future of Orangeism and parading on the island. 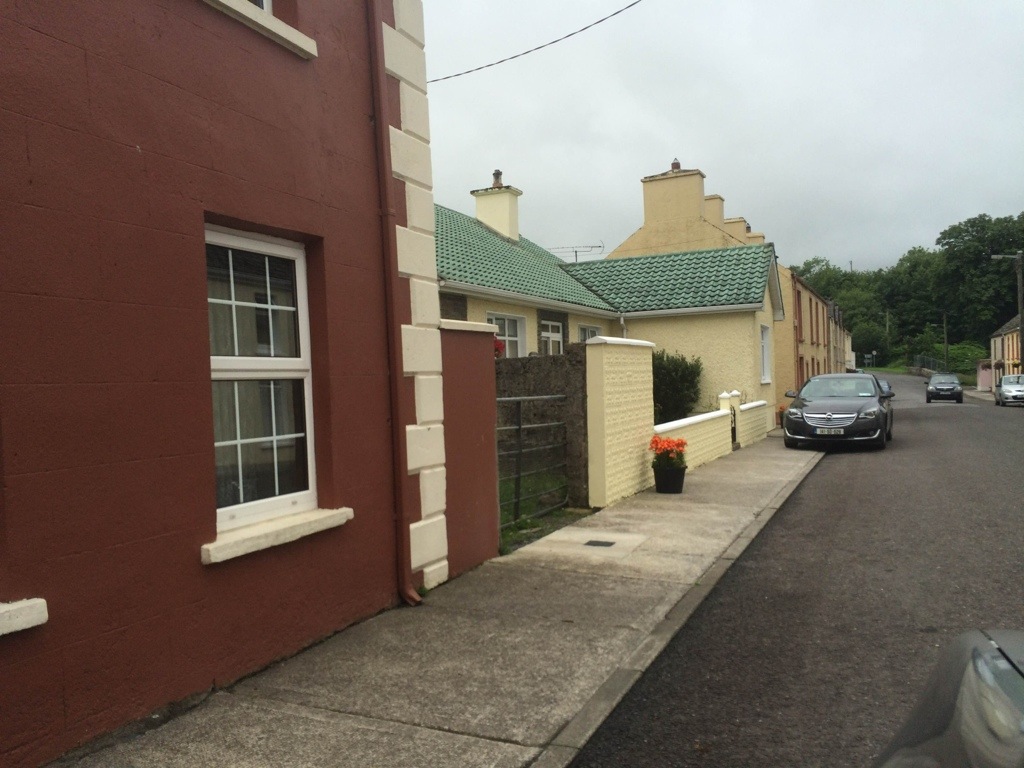 On my way to the Donegal parade I called into Ballintra, home of the local lodge. It was like the set of Heart Beat, planters full of Orange Lillies lined the hamlet.

I arrived in Rossnowlagh and the dissonance was immediate and jarring. The geography, the infrastructure and the rolling hillscape bordered by sea and dunes was inimitably the South. The symbols, signs and emblems were indubitably the protestant North.

The weather was blue skies and harmonious. I began to broadcast through Periscope, walking myself and the viewers through this weirdly foreign yet familiar landscape. I’ve holidayed in Donegal – Ardara and Portsalan and surrounding areas – from my age was counted in months.

I started at ‘the field’ where the march concludes and the Grand Masters talk. As I approached I was astonished. The terrain underfoot was the sovereign sod of Eire, yet above Union flags were flying.

As I strolled around the open patch I could see that holding areas had been arranged for each of the counties in attendance, all eleven of them.

I let it all sink in then took myself up the Donegal lane-way that made up the main route, skirted by happy onlookers of all ages, stalls selling bunting and sweets, all very red-white-and-blue.

As I advanced and came closer to the centre point of the event – the hairpin bend by the grand Sandhouse Hotel – the crowds thickened and my view was filled with Orange sashes and pro-Union flags of all kinds.

No Belfast confetti, no blue bags, but one bottle of beer did I see all day. Unanimously decorous and dignified. Like a living postcard, I saw smiling farming men, they were like the “tattered coat on a stick” Yeats wrote of. Instead of NFL-sized PSNI officers it was laid back Gardaí.

I’m in Ireland and British flags are flying. I’m at a meet of Orangemen and surfer dudes are strolling by. I’m at a parade and there’s not a drop of intimidation.

I was confused. The everyday faces and families, who were these people? Were they locals? Were they enthusiasts up for the day? Were they purposely bussed in to swell the numbers?

Turning around the chicane in front of the hotel I took myself up the back hill towards the top field where the marchers assemble and the march commences.

The crowds thinned and the classic Donegal ditches and bungalows in a field showed themselves. As I approached the breast of the hill the air began to pound like a stethoscope, at the summit the bands came into view.

At this moment the Internet stopped, then soon after the rain started.

The procession was led by a Donegal lodge, and behind them was a brass band. I walked with them back down the hill where the crowds had grown bigger again. 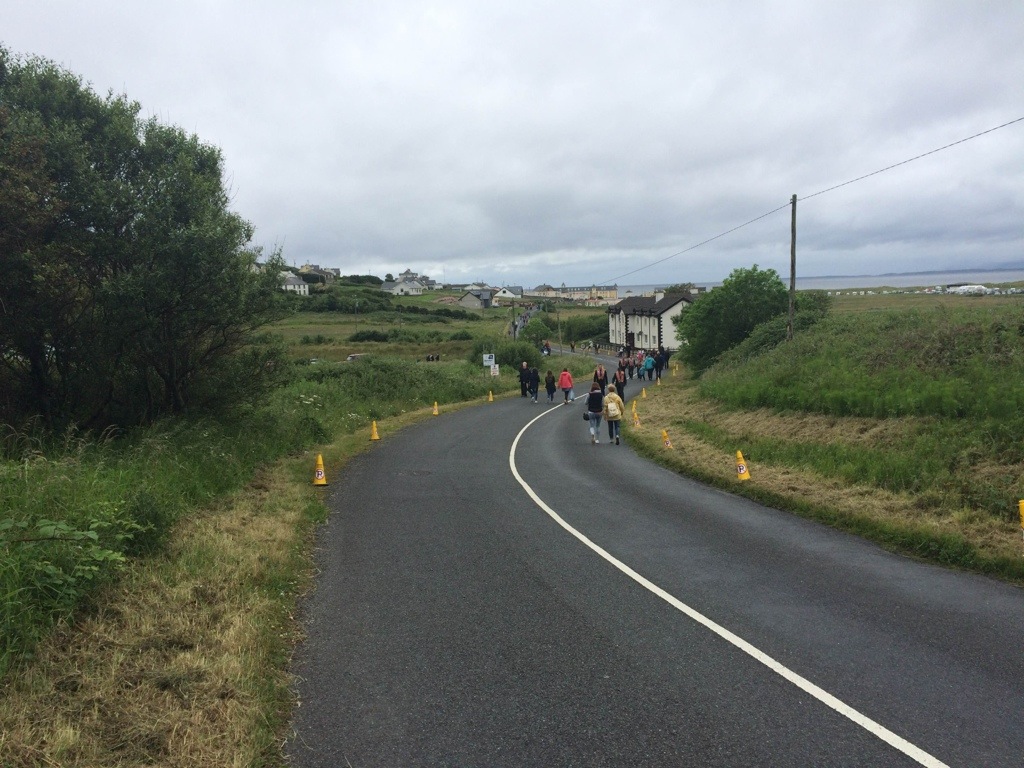 I made my way then to ‘the field’ to watch each lodge and band in turn finish the route. 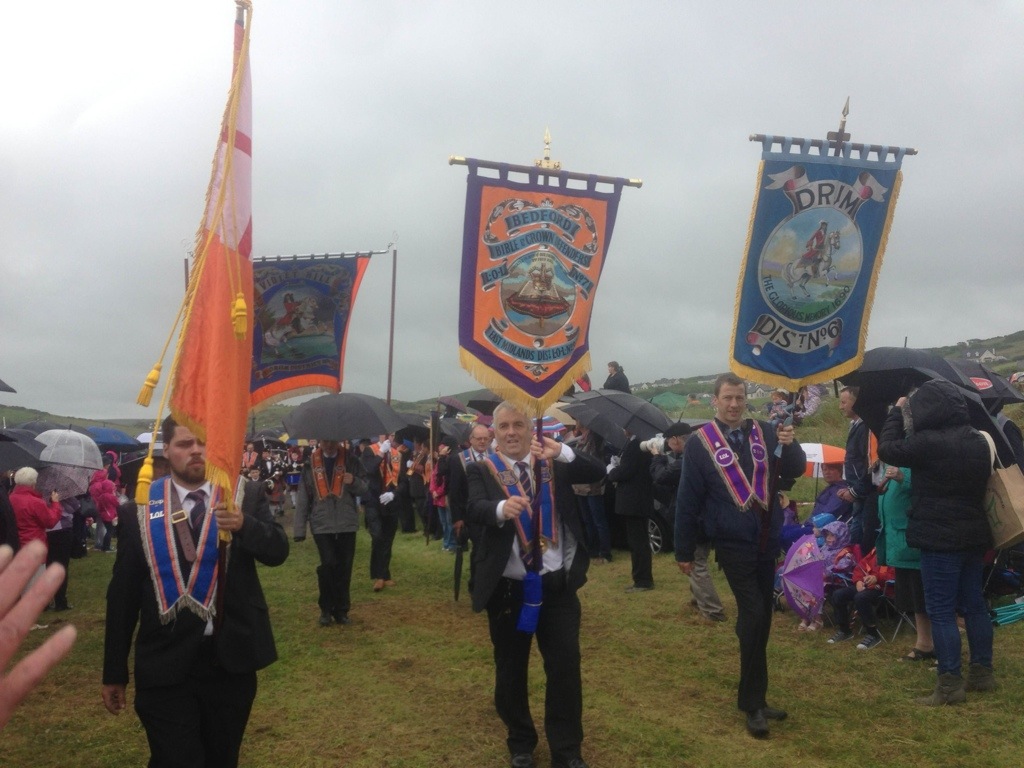 The range of lodges – from Dublin, County Wicklow to Drum, County Monaghan to Donaghadee in the heart of unionist Ulster – was fascinating. It made the fraternal organisation seem wild and exotic. It wasn’t the stereotype of aged men, there were young men and women wearing sashes; like modern society it was the whole spectrum. 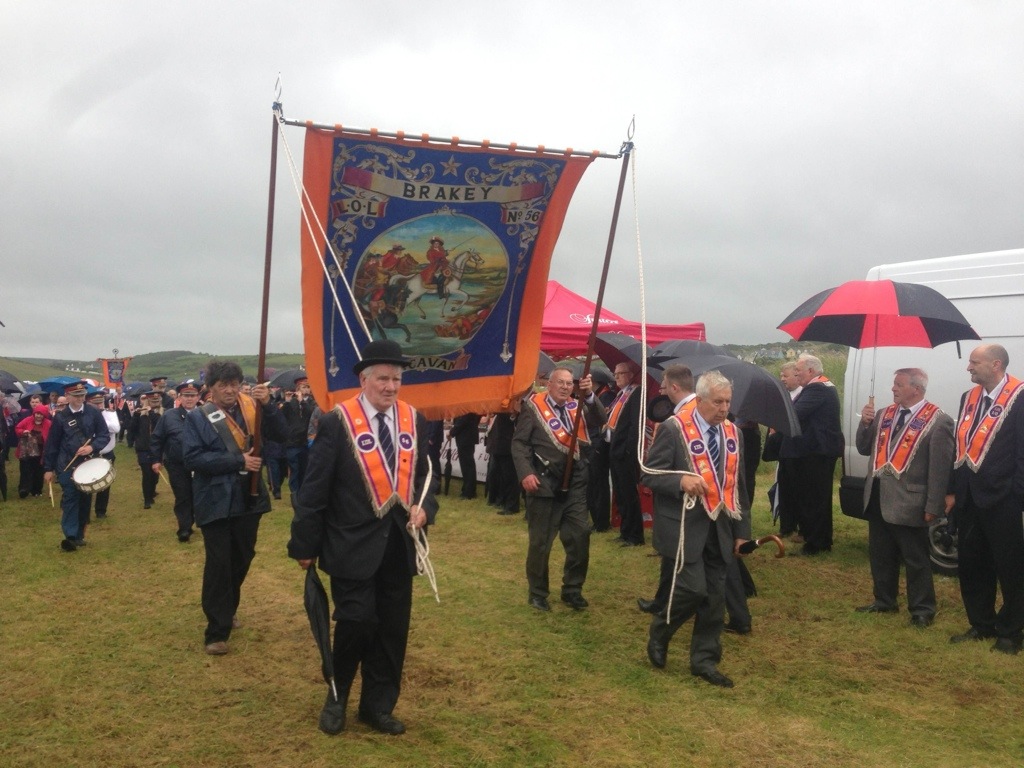 The rain by now was heavy, but smiles and happiness remained. The merry marching bands were one by one called to ease, whereafter the marchers went to the chip and ice cream vans, food tent and the hotel. It was a great big social occasion. 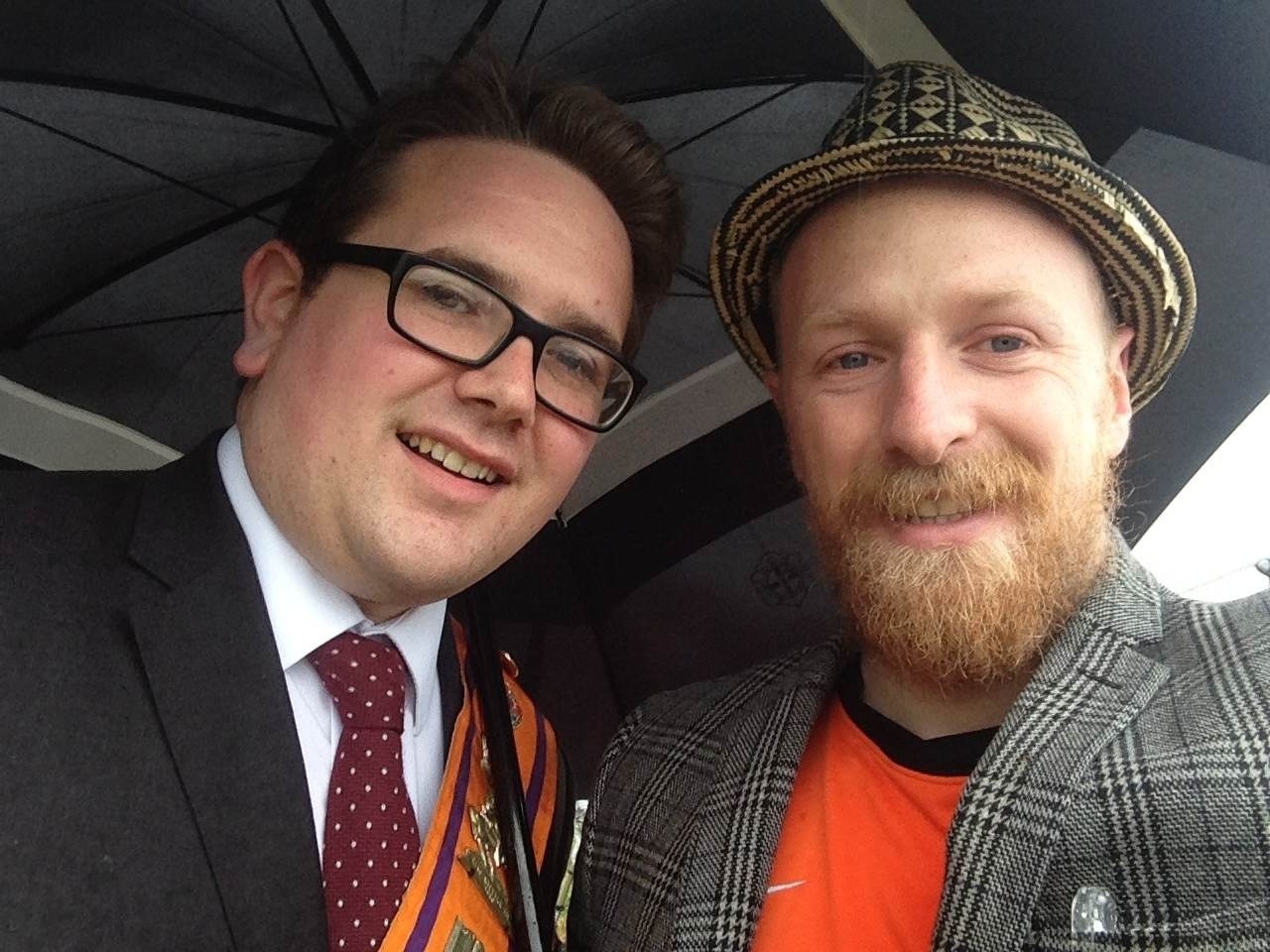 I even bumped into Limavady’s Aaron Callan, historian, councillor, Orangeman, contemporary and friend. We got a #Twelfthie. It was his first time marching in the South and he was ebullient. 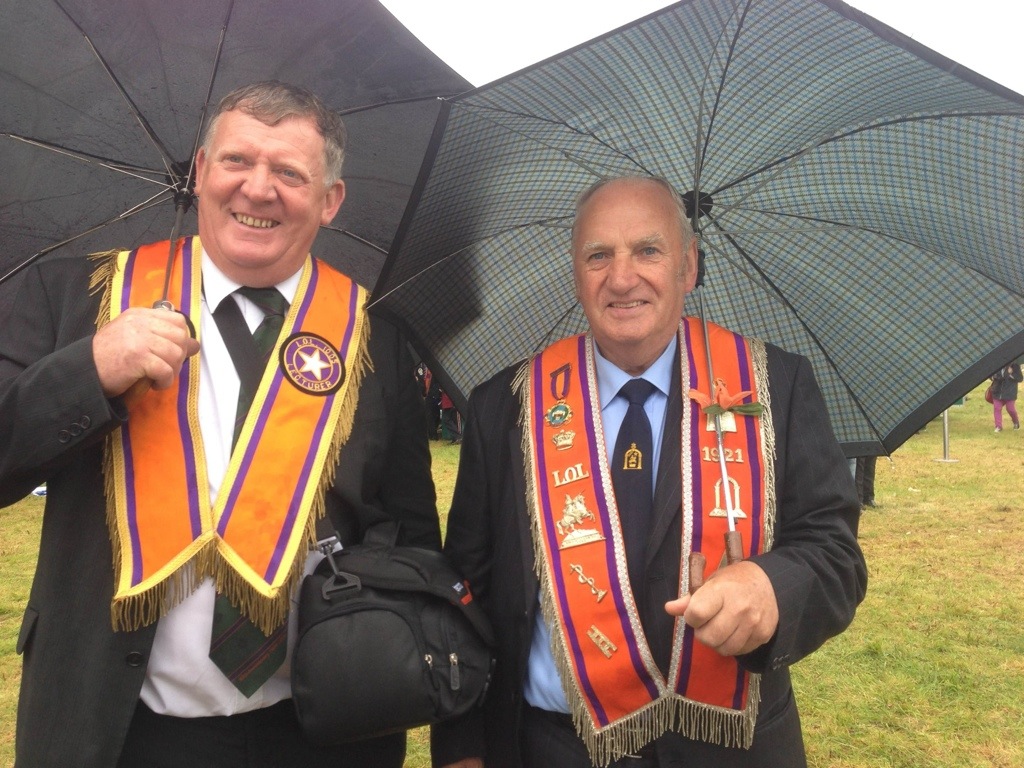 I spoke with some of the southern brethren, like Robert McGonigle of Thiepval Memorial LOL 1005 Convoy, and Gerald Laird of Raphoe LOL 1921. This experience felt like glimpsing a rare and near extinct breed of animal, the southern Orangeman.

We chatted across a range of topics, from the history of the day, to community relations, to identity. For Robert he is British and Irish. Michael D. Higgins, the president of Ireland, was unable to make it, but that didn’t bother Robert too much; but he said he’s welcome any time. I chatted with others from across the island, then began to wind myself back to the car where I would take myself to the next stage of my Twelfth discovery weekend.