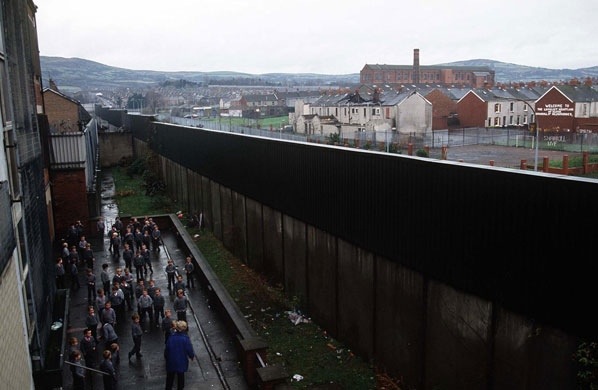 ‘We had a break in August, theirs was in July
But when one drop of rain would fall we’d all look at the sky’
– Colum Sands, ‘The March Ditch‘

Religion isn’t a choice, you’re told by your parents. Confession is genetic, like our hereditary hatreds and genetic grievances, like our constitutional loyalties. I’m conceived, therefore I’m [protestant/catholic] because my parents are [Protestant/catholic].

David McCann grew up “inspired” on the story of Easter Rising of 1916. I grew up with the history of the Somme and the Allied war effort. I didn’t learn about the 1916 rebellion until I was 22.

David had a Catholic schooling, I a Protestant one. Born in the same city we swear asymmetrical allegiances, utterly unvanquishable. My connection to Protestantism (agnostic) and the Crown is immutable, and David is the inverse. Two sides of the same Belfast coin.

How is this – boys identical in age born in Belfast taking an opposite view on history and the constitutional question?

This is the tribal upbringing of northern Ireland’s children. Division is sown by different narratives taught at home, school and church. It was so with our parents as it is with us. The situation in which we find ourselves is entirely predestined, coded into our DNA. We don’t choose our confession or creed. They are bequeathed to us, and they are inextricably linked:

“To be a protestant or catholic in eighteenth-century Ireland indicated more than mere religious allegiance; it represented opposing political cultures, and conflicting views of history.”

In England you can have Tory parents and vote Labour. In Northern Ireland you vote and worship as your forebears did.

Eighteenth Century social structures govern Twenty First Century Ireland. I want to finish with an illuminating comment from Jonathan Drennan in the Irish Times who wrote about growing up British in Northern Ireland. He wrote:

“On my street, cricket and touch rugby were played every night throughout the summer. A stone’s throw across the city, children in West Belfast pucked a sliotar while dreaming of lining out at Croke Park.

We tuned into CBBC. They watched Dustin on the Den on RTE. We sang God Save the Queen at school prize days. They rose for Amhrán na bhFiann at Antrim Gaelic football games. We lived in opposing bubbles on the same island, largely ignorant of each other.”

“The bigotry and segregation were never obvious or stated in my experience at home. We were simply raised in parallel worlds.”

Young people in the DUP are unswervingly convinced by the rightness of British history and the incorrigible wrongness of the republican narrative. Likewise, young people in Sinn Fein are absolutely settled on the unspeakable malignancy of Britain in Ireland and the moral probity of armed republican separatism.

To this day I still struggle to understand the parallel worlds and bubbles in which so many people that govern us live. Jonathan Drennan has perhaps solved this conundrum that so splits Northern Ireland. And then there’s Orwell:

“People ignorant of one another’s existence, held apart by walls of hatred and lies, and yet almost exactly the same.”