You are at:Home»News & Current Affairs»Opinion»‘Stormont’s Stalemate and Our Doomed Youth’
Social share: 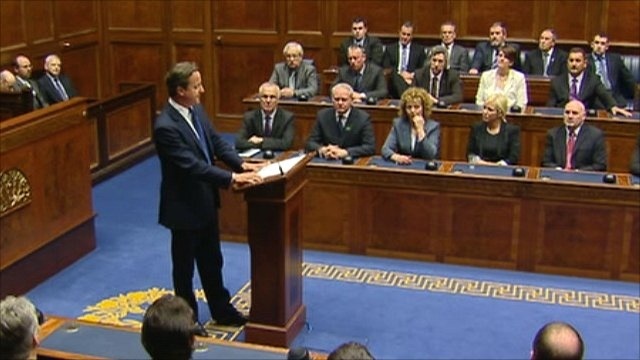 ‘“Do you know what Ireland is?” asked Stephen with cold violence.
“Ireland is the old sow that eats her farrow.”’
– James Joyce, Portrait of The Artist as a Young Man

Last week, David Cameron’s speech in Birmingham on Monday presented the Government’s counter extremism bill. He declared that to tackle extremism would require the removal of the “extreme ideology that underpins it”. He called this the great “struggle of our generation”.

What is the real “struggle of our generation”? And when Cameron talks about ‘our’ generation, whose generation does he mean?

The current budget laid out in London systematically excludes those that own the future from any kind of real help. Thirteen million young families UK-wide will lose a portion of their tax credits. As a young person in the UK today you’re three times more likely to be unemployed, and if you do have a job unfortunately Osbourne’s brilliant new ‘living wage’ won’t apply if you’re under 25. On a minimum wage of £5.30 an hour and a zero-hour contract you’ll need to make your rent (since, let’s face it, you’re not buying) and of course cover general living expenses, since under 21s can no longer apply for help with housing.

The situation in Northern Ireland is a storm within that storm though. The stalemate over welfare and the budget presents an enormous inertia, not just to the delivery of services but to the general progress of society. There’s a very real threat that Stormont’s house of cards will tremble to collapse, or so we read each day.

We’re part of a country that is segregated economically – not just religiously and ideologically – a fact of which the ‘folks on the hill’ seem oddly negligent. In Northern Ireland, parties on all sides of the spectrum are swift to vocally engage and direct public attention to recurring sensationalist or inflammatory issues like flags or place names.

All the while a wider storm gathers in London that will deliver further pain upon lower income families and people. The current pantomime in Stormont over welfare underlines an embarrassing inability to agree a pragmatic and strategic compromise for the benefit of Northern Ireland as a whole.

Culture and identity issues are understandably rooted in the communities within Northern Ireland but often serve as political distractions to the socio-economic debates that politicians need to have to build a future for every one, but in particular the young.

Current disillusionment and disaffection with politics have as much to do with this economic inequality as it does with the issues dragged forth in the endless cycle of cultural cannibalism and in fighting at Stormont. For the people lack of progress on employment and living standards are a daily economic reality, not a hypothetical one or one that will be mended by political points scoring.

Our leaders are perfectly willing to run the passion narrative that is identity politics whenever convenient, a flashing red cape that the public will always chase. The young of Northern Ireland have been born into this awful groundhog day of cultural wrangling, a vertigo that leaves a rotten dizziness in the population. The result is that other big issues, like hope of a stake in mainstream society or a real future, remain out of focus. One can’t help but notice that this vertigo serves as particularly useful to the incompetent political set up in times of stress.

The facts are that 35% of children in the Maiden City live in poverty, while the debate over the city’s name is priority. The effects of this conversational duality are not just limited to depriving those in the estates of hope but even those graduating our universities, only to flee abroad.

There is a necessity to break conversation free from the narratives that are a convenient fall-back for the political class, to persist with the difficult dialogue of mature government. The future and those that must live in it needn’t be doomed to this kind of purgatory. The precedent for it must be set within halls of government.

Stormont politicians should not need to be told that peace is supposed to be a beginning and not an end in itself. Only when these tribal issues are respectfully set aside as secondary debates can the young people, from all communities, collectively aspire to a future of possibility and not become mere inheritors of what has happened in the past. Perhaps then the “old sow” will remarkably spare her children.