You are at:Home»News & Current Affairs»Opinion»‘Post ceasefire pseudo warriors on the streets of Derry’ – by Brian Spencer
Social share: 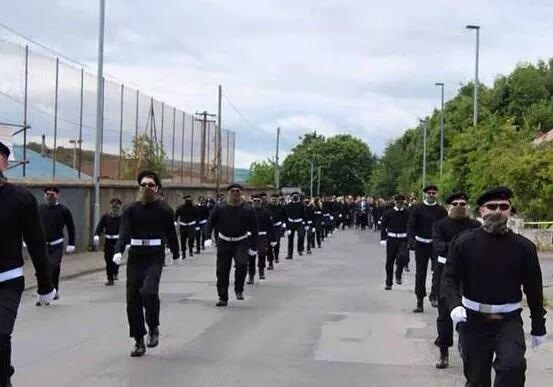 It was a terrifying sight. Like the North Korean lockstep, or something you see in grainy footage of a bygone and militarised Europe.

It was bewildering. Masked individuals bedecked in paramilitary styled garb openly parading in the streets of Derry/Londonderry, the second city of Northern Ireland, 15 years into 1998 Agreement. How in this time of such normality and relative civility, could something from a movie play out on our streets? There were streaming rows of marchers, seemingly dozens: from where have these people and this ideology come? Fascists in aesthetic if not intent.

It was also hilarious. Not only were the numbers swollen but so were the bellies. The cockroach crunchers obviously don’t do much marching never mind training; their physiques and shallow stride suggest sedentary living.

These faceless persons are playing at being what used to be paramilitaries, flexing their atrophied muscles. It was unsettling but no one was terrified.

They are ceasefire warriors, jumped up commandos and “wee fat Mickeys” as Eamon Collins called their type; men who find prestige, power and identity in trying to be a hardman.

The hilarity of their spectacle is their weakness, and here we have to mock these people out of existence. George Orwell in his essay ‘England Your England,’ wrote:

“One rapid but fairly sure guide to the social atmosphere of a country is the parade-step of its army. A military parade is really a kind of ritual dance, something like a ballet, expressing a certain philosophy of life. The goose-step, for instance, is one of the most horrible sights in the world, far more terrifying than a dive-bomber. It is simply an affirmation of naked power; contained in it, quite consciously and intentionally, is the vision of a boot crashing down on a face. Its ugliness is part of its essence, for what it is saying is ‘Yes, I am ugly, and you daren’t laugh at me’, like the bully who makes faces at his victim.”

Extremism is only possible where people dare not laugh at extremism, and that’s what we have to do here.

People talk of the Orange and loyalist marchers representing a “hate fest”, but that is misguided and unrepresentative of the overwhelming majority. The marching of these faceless and black garbed republicans was a transparent hate fest.

Unionists are right to be outraged, but their blindness to the UDA-UFF funeral shows breathless duplicity and erodes their credibility.

“We have to confront a tragic truth that there are people born and raised in this country who don’t really identify with Britain – and who feel little or no attachment to other people here.”

We need to show that Northern Ireland does not want this, INLA or UFF or any jackboot.