You are at:Home»News & Current Affairs»Opinion»Pin pulled out of Twelfth grenade yet again – by Brian John Spencer
Social share: 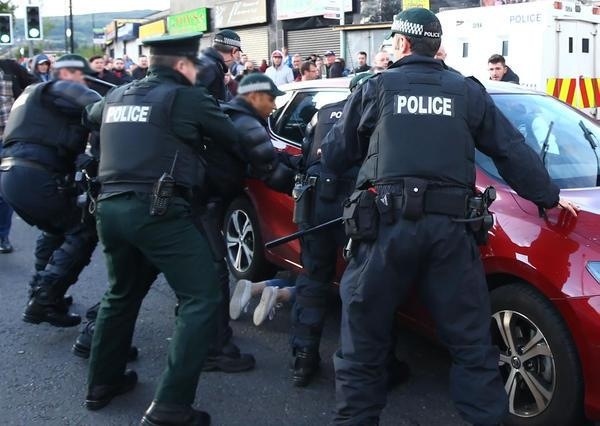 A fever and cloud of infection had been hanging over North Belfast – dark and ominous but we hoped it would dissipate. We wanted peace, forbearance and magnanimity.

To this community in a boiling stew of bad health we added the Twelfth, and the clouds broke, raining hate and Belfast confetti; injuring innocents and Belfast’s good name. We hoped, but – hatred and history rhymed on the Twelfth night.

It was all rather predictable this year. In July 2014 unionism stood together. Unionist politicians and community workers were loud and public and unambiguous and unequivocal – NO VIOLENCE. We did not hear that this year. We got anti-leadership.

For the violence, it was either tacit approval or culpable neglect. There is a perverse pay-off in allowing a break in the peace to pass.

The easiest way to re-route NAMA questions is to let a major disturbance divert public attention. Likewise for welfare reform; a by-ball for the accountability of wealth and power. In a jumpy constituency it’s not going to hurt electorally to allow some of the ignorance-sick “patriots” get stuck into “the other”. Not a unhelpful bargaining chip for future talks either.

Given that the DUP and the Orange Order are one, there are serious questions to ask. As Sam McBride reported from the scene: “Some Orangemen [were]openly egging them on [loyalists to riot].”

A pathetic press release issued ex-post violence is exactly that, pathetic. Ex-ante the violence the Orange Order, DUP and unionism-minor had issued Paisle-style denunciations of the Parades Commission, apocalyptic and incendiary. The Parades Commission is an independent body enshrined in legislation, and the determination for the Ardoyne interface appeared balanced and fair in the context of precedent and present behaviour. The marchers were to pass in the morning and not in the evening. Until rowdiness fuelled by “prodigious drinking” is addressed the determination looks sound.

Over an angered loyalism there stood no leadership, but rather winks and nods and a nurturing and affirmation of the rage, and into the vacuum spilled assault and battery and a near atrocity.

If the Loyal Orders and bands could be patient and demonstrate improved conduct, a decision could turn their way. But the Orders and bands simply caterwaul, their tiresome screech echoed by political unionism.

We need a condominium between the two adversaries, and it isn’t just the role of unionism. A lot has been said from Adams and McGuinness and other republicans about the Orange tradition and the need for its full and proper place in Ireland. Orangeism is Irish. I want to see the north Belfast parade resolved in a way that pleases all parties. As Yeats said:

“I think we should accept the whole past of this nation, and not pick and choose.”

I’ve reproached the DUP and Sinn Fein, but there’s also a change required by loyalism and some of the Lodges.

Two, Fintan O’Toole also wrote that the most dangerous mindsets in NI don’t belong in any real sense to a “culture” or “tradition”. At the front of the PSNI balustrade at the Ardoyne interface was a man with an Ulster nationalist flag. The loudest voices caterwauling about the oppression of Protestants and Protestant culture are some of the shallowest on facts and history.

Thirdly, and connected to the two points above, Fintan O’Toole said that respect for different traditions will only mean something when those who profess to belong to those traditions are willing to defend them against those within their own ranks. That means the coasting classes have to speak up.

There are many in unionism, the Loyal Orders and bands who look upon the Ardoyne violent with abhorrence, yet little ever is said. Countering or challenging the loudest voices can be very dangerous. This is the city and country and culture of the quiet unionist and interested nationalist too. Until we remonstrate and rebuke the worst, this will happen again.