You are at:Home»News & Current Affairs»Opinion»‘Marching in circles’ – By Jonny Byrne
Social share: 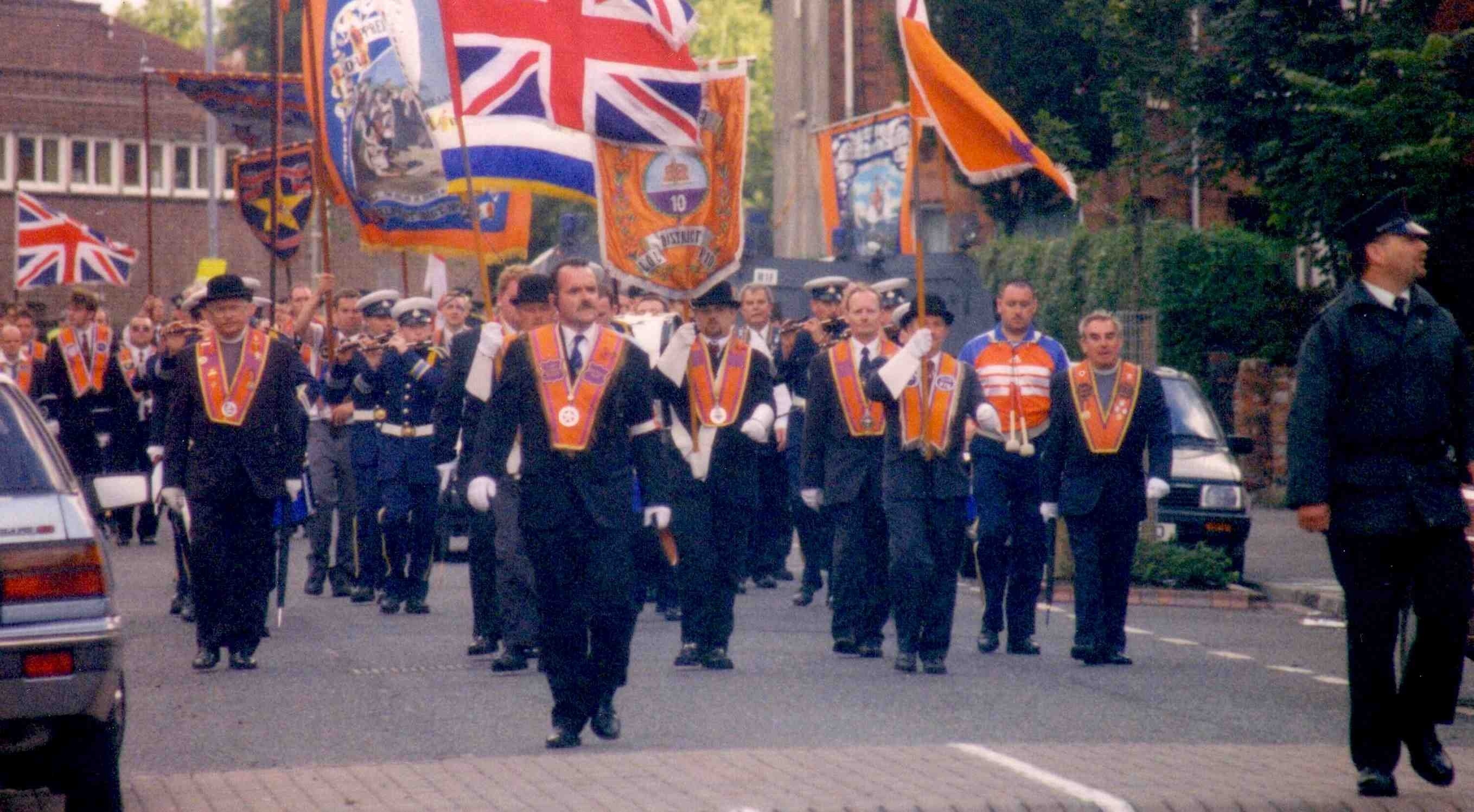 The recently negotiated Stormont House Deal, which some have labelled ‘an agreement to make an agreement’ was dominated by discussions about welfare reform and the legacy of the past. According to media reports the issue of parading was sidelined, as Unionists were not prepared to enter into discussions while the parading and protest dispute in North Belfast remained unresolved. However, the published agreement did note that OFMDFM would bring forward a range of proposals on the issue of parades to the NI Executive by June 2015. Unsurprisingly, we have heard little of this initiative, and cynics would contend that whatever emerges will be a reworking of the Ashdown review and the Haass – O’Sullivan recommendations. So,still we wait for some degree of clarity and a political willingness to try and address the crisis surrounding parades and protests.

The sad current state of the narrative around the most contentious parades and protests can be illustrated through a series of micro-questions. When is an observer actually a protestor? And when is a member of the public or resident really a supporter or protestor? When is a tune really a hymn and not a sectarian song, and when is forty-nine metres, more like fifty-one meters? When is a flag historical and not paramilitary? And what defines inflammatory behaviour? This is what happens when we are unable to reach consensus about the most appropriate way to celebrate both cultural and historical differences in what is still a contested society. Independent arbiters make clinical judgements based on the evidence presented, and then each decision is placed under the microscope by opposing factions, and used as a way of determining whether they ‘won’ or ‘lost’ that particular parading battle.

In the absence of agreement, too many people are quick to abdicate responsibility for‘problem solving’, and more often than not, the Parades Commission bear the brunt of public anger and disgust. Yet, the reality is that this commission is only in existence because our politicians will not agree a common way forward. Has anyone taken the time to consider what the current situation would be like without a commission – would we be any better off with the Chief Constable or Secretary of State casting the deciding vote? Similar to policing reform, our elected representatives realised very quickly that its better to by pass the difficult decisions, at the expense of alienating their base. The reality is that after twenty years into a political and peace process our elected representatives, still cannot make decisions where their own constituency, could be perceived to have lost. Like most things in the post conflict world in which we now inhabit, policy making is proofed to ensure that there are no winners or losers, only deferred decisions, and outputs which are still measured in community gains or losses.

In the absence of an agreement we rely on the commitment of community leaders, participants and the police to ensure that the parades and protests pass off without incident. For me this is the travesty in our failure to find a solution to the issue – for the thousands of people across this island that celebrate the culture of the Loyal Orders, their commitment and participation in remembrance is often reported in the media as “we had a peaceful Twelfth”. The reality is that we are only managing the issue of parades and protests. We simply go from crisis to managing crisis on a weekly basis from May to August. Furthermore, the reporting of these events involves the same people, saying the same things, pursuing the same agendas; even they must be beginning to question the wisdom of their own narratives!

People often throw out statistics, which suggest there are more Unionist and Loyalist parades than ever before, and that only a minority are deemed sensitive and contested. This may be true, but for those Unionists that are engaged in parades which are ‘red flagged’ this is of limited comfort. Likewise, Nationalist residents opposing these same parades cannot see beyond their immediate streets. It is these local disputes, which come to epitomise the issues of parades and protests in Northern Ireland. In the age of ‘big government’ we still allow micro disagreements to dominate the political landscape – for an Executive that promotes the lessons of its peace process this is a poor indictment of its progress to date.

Looking forward, it is difficult to see a meaningful and long-term solution to the parading crisis. While community representatives, parade organisers and participants, protestors, and political representatives continue to have the safety of the Parades Commission and the Secretary of State to blame, the odds are stacked against us. These ‘third parties’ mean that those closest to the issues do not have to answer the challenging questions such as, what do we have to sacrifice to ensure that parades and protests do not derail the process of normalisation? What does celebrating culture in a shared society look like? What does acceptance of different cultures look like? And most importantly, how do we all own the public holiday known as the Twelfth of July?