You are at:Home»News & Current Affairs»Opinion»Can Greece possibly once again slay the beasts of Europe as they did in UEFA Euro 2004?
Social share: 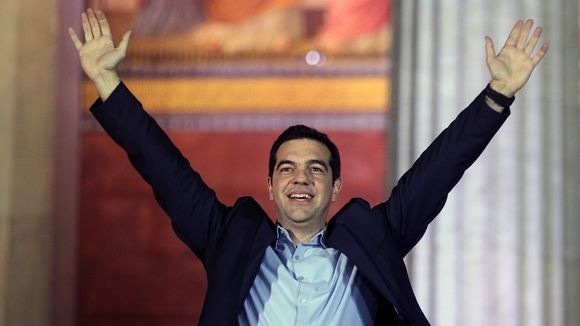 “And all of them were caught in something larger than themselves. Some of them hated the mathematics that drove them, and some were afraid, and some worshiped the mathematics because it provided a refuge from thought and from feeling… they were men and slaves, while the banks were machines and masters all at the same time.”

In the late 1990s Greece, on the surface at least, appeared to be economically healthy. With it’s entry into the European Union and the taking on of the Euro currency in 2002, Greece went on to host the Olympics in 2004. A relentless national optimism reigned in a fictional financial bubble, and then the bill came in.

The debts shattered the dream and were followed swiftly by the foul blow that was the Lehmann Brothers crash. Reverberations were felt around the world as the banks were propped up without moral consequence but at the expense of taxpayers. In vulnerable countries like Greece, Spain, Italy and Ireland the effect was devastating.

Life in Greece has since been a hellish austerity hangover. It’s safe to say that not only has it been a severe economic crisis for the Greek people, but a humanitarian one.

After half a decade of austerity, one in four Greeks is unemployed and youth unemployment soars at 60%. With 27% of Greeks living in poverty and the ongoing loss of pensions for both working people and the elderly, suicide and depression rates have shot up too. In times like this people turn to crime and drugs.

The cuts have not only effected general employment but the health sector. When this crucial service suffers the whole nation does. While doctors have been asked to cut their budgets by half they can hardly perform their job. A cap has been placed on things like cancer-screening. Infectious diseases have also gone untreated and undetected. The numbers don’t lie. Cases of HIV are on the increase and there has been a tuberculosis spike in 2013.

The Rise of A Greek Demagogue

Understandably, the Greek people are angry. Like others, they’ve spent time on the streets, protesting and demonstrating against the imposed austerity cuts many times already.

The fringe leftist Syriza party had promised to renegotiate the conditions and the severity of reform, capitalising on the anger and desperation of the Greek people. They won by a landslide in February.

Prime Minister Alexis Tsipras then challenged ‘the Troika’, the three institution collective which provides loans on the condition of cuts and increased taxation. When his proposal to renegotiate the austerity measures with the Troika was predictably rejected, Tsipras was forced to make further concessions – a humiliating defeat. The very idea of challenging the Troika gave rise to bitter response across Europe.

Some leading German newspapers, despite the statistics, began to paint the Greek people as lazy spongers living off of the German taxpayer credit card. The narrative in Germany is that Greece deserves austerity’s tough therapy. On the other side of that coin, Greek media began to depict German officials, including finance minister Wolfgang Schäuble, as Nazis turning Greece into a kind of debt prison, robbing it of it’s own sovereignty.

Fellow European countries, though still heavily in debt, voiced from the sidelines their annoyance at Greece’s bold demands. As far as they were concerned Greece should complete what it has started. Ireland’s Taoiseach Enda Kenny verbalised his lack of support for debt relief alongside Italy’s Prime Minister Matteo Renzi. Reasonable enough a position, given that these countries have played by austerity’s rules and done the homework. But taking refuge in the mathematics does not abdicate the fact the Greek people are in real humanitarian trouble.

Now that another payment is due, lenders want Greece to make further concessions that Tsipras has called “unbearable”. The PM put it to the Greek people to be decided by vote on Sunday whether they should accept the conditions or not. Holding out for this vote, Greece missed the deadline to pay 1.5 billion of its 323 billion euro debt causing the country to effectively go into default over it’s repayments.

The Euro Crisis Exposing Our Disunity

The polarisation of northern and southern Europe, rich and poor, lender and debtor is emerging in a disturbingly kaleidoscopic Eurozone drama that seems to fly in the face of the original dream of the European Project.

The main challenge to European solidarity is wild brinkmanship and the harsh war of words it has produced. Creditors and governments have, until now, wrestled like the gods of antiquity above the heads of regular men and women in choosing how the people should suffer for the sins of the world’s reckless bankers and careless domestic politicians. Sunday’s referendum ushered through by the Greek Prime Minister Alexis Tsipras, though, offers the Greek people an opportunity to decide for themselves – more austerity or depression, exit and the unknown.

The Greek people feel victimised that the European Central Bank and IMF are pushing them harder into compliance with their one size fits all monetary policy. It’s why they voted for Syriza in the first place, the promise of a little weary pride and that Greece could stand up for itself. Extreme economic stress pushes extreme politics.

Economically it may be necessary for Greece to pay it’s debts, after all the bank knows nothing but the numbers. However, the rigid policies that are weathered more easily by wealthier northern European countries are not necessarily good for all, as the statistics above show. The Greeks are not asking for the wiping of debt but a lesser degree of austerity, for the sake of their social and infrastructure.

While EU standards proved flexible enough with the inclusion of a questionable Greek economy to the eurozone, there is no Troika compromise on the horizon. It seems that there is a demand for the moralistic accountability of Greece now that did not exist to the same extent in the beginning.

At the same time the general unity of the EU is tested by other countries inflicted with austerity, as they rage and cannibalise their fellow debtor regardless of a solidarity in suffering. It’s visible in bitter and dysfunctional media stereotyping and division, a display of national self-righteousness from nations that still have massive debts .In Europe we are all slaves to the mathematics of austerity. Across the continent government ministers have reacted with indignation to brazen Greek defiance and with indifference to the Greek suffering.

Where is the European common good? Are we comfortable that other European citizens continue to suffer? The current polls appear to show that Greek citizens will vote Yes to remaining in the EU and to more austerity. Are we as committed to these, our fellow European citizens, as they are to Europe? Isn’t the idea of European unity supposed to be transcendent?

Overcoming economic problems and political failures can make the eurozone a better and stronger place, even after the recent spate. As we figure out how Greece should satisfy the “monster bank”, let us not forget our common humanity and that these decisions have real consequences in real homes and to real individuals.