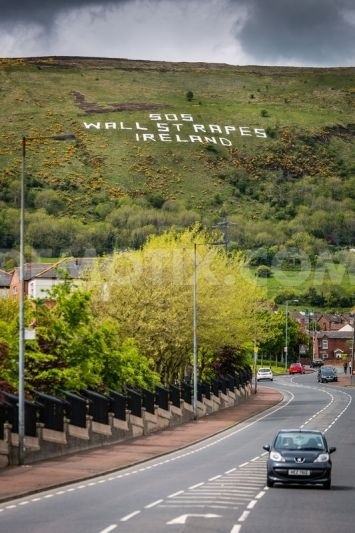 These words currently sit high above Belfast laid out on the side of a mountain, aptly reflecting what some of us are thinking. One wonders if Stormont and the politicians are sleeping. I’ve heard the phones are broken on the hill,so we know they are not physically talking to anyone, let alone those in the business community.

First Minister Peter Robinson described the sale of business loans from NAMA to Cerberus last year as ‘excellent news’; whilst others wrote articles with the aspiration that Cerberus would be the knight in shining armour for Northern Ireland’s economic recovery. In truth it could be said that they’ve lived up to their name.

In Greek and Roman mythology, Cerebus denoted athree-headed dog or ‘hellhound’ with a serpent’s tail anda mane of snakes and lions’ claws, which guarded the entrance to the underworld to prevent those who entered from escaping.

Maybe we should see it for what it is, a company who has to and wants to make money, and there’s no shame in that. Yes, they’ve bought thousands of loans worth billions of pounds and it has given them control of hundreds of companies, properties including office blocks, hotels and development land.

However, what is unbelievable is the lack of knowledge and understanding of what is taking place here; the deafening silence of Ulster Bank, an institution 82% of which is owned by the tax payer, who have sold billions of pounds worth of loans in the last few months.

Recently I’ve been told ‘off the record’ that Ulster Bank sold in excess of 1500 loans to Cerberus in the last twelve months. Just take stock for a moment – the SME community accounts for 95% of the businesses in Northern Ireland. It’s imperative for the already stretched local economy that as many of the companies involved in the loans trades continue to trade and are allowed to get on with their business. In reality though, this is unlikely. The situation will be for all companies, whose loans have been sold, that unless you have a new capital partner in place, you may lose your business.

Cerberus’ business model involves borrowers rapidly repaying the former NAMA or Ulster Bank loans by selling properties or finding new financial backers. A number of borrowers have been able to reach a deal to date but something worth noting is that across the country from Dublin to Cork and Galway to Belfast, the private equity companies are now enforcing companies to sell their assets on a very regular basis. It’s a very sobering thought for many.

The interesting thing for me is that most of this information has largely gone unreported. Politicians, journalists and even large swathes of the business community are either completely unaware of what is happening or turning a blind eye. Perhaps there could even be a little of – it’s not happening in my back yard – and it’s not affecting me.

The reality is, it is happening in our backyard and the scale of what has happened is incredible. I want to know why all the secrecy – why do we not know the exact figure of loans that the Ulster Banks has sold? The bank after all, owned by RBS, is 82% owned by the public – are we not entitled to some visibility and transparencyaround this matter?

We are living in austere times with little credit. Northern Ireland is not sustainable given the public sector provides for 70% of the work force. We need the private sector to grow and prosper. Many would argue that the last thing we needed was a local bank that allegedly supports the business community, selling billions of pounds worth of loans to private equity companies. The results and out workings of this is potentially ruinous for many.

We at GDP Partnership are currently working with borrowers on proposals across the country, which would enable local business owners to remain in control of their businesses. It’s crucial that local people whose loans have been sold find a funding partner, one that will allow them to continue with their business and orchestrate an exit from private equity.

Failure to find an appropriate partner and get a proposal accepted could be fatal for their business as well as the SME sector. I would urge the politicians to engage and ask questions and show a bit of an interest in what is going on here.

I would also encourage Ulster Bank to let us know how many businesses were involved in the trades. This would be a good start and allow us to understand the potential scale of the problem.

Ireland doesn’t need to be raped by Wall Street and we don’t have to worry about a three headed dog – however like most things in life, education around the process and what the private equity companies actually want will go some way to resolving the many challenges aheadwithout the local economy suffering unduly.