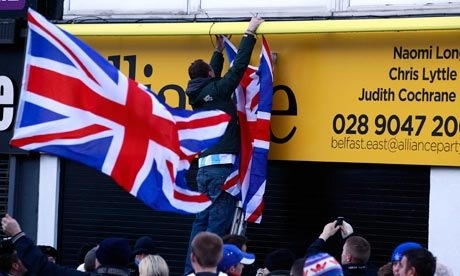 The peace process in Northern Ireland has been a failure. The logjam of mandatory coalition is as predictable as it is inevitable and the only solution put forward by those still supportive of the basic architecture of the institutions given to us by the Belfast Agreement, is to bury the head in the sand and push forward, because if we don’t, we may go back to the bad old days. I made this point on EamonnMallie.com only a few weeks ago, who would take us back? Surely not those who now tell us they are wedded to democracy? Do we only have peace because we have a process to the liking of Sinn Fein/IRA?

There is no alternative shout the supporters of the process, but what of the man at the very top of the process, the man at the head of its implementation, Peter Robinson? He said in 1998 that “there is always an alternative to the IRA in Government”. Now we are told that our current system is the only show in town. It seems we must sustain the system of Government that Peter Robinson himself says is “not fit for purpose”. How illogical is that?

People regularly bemoan the dissenting voices of those of us who oppose the agreement. People like me are lambasted as wreckers and destroyers trying to take us back to the ‘bad old days.’ Of course I would deny that. I believe that the fact that people such as myself gain any sort of traction with anti-agreement political views, is in itself a testament to the failure of the peace process.

Anti-agreement Unionism is not on the fringes. Over 100,000 people voted for the TUV and UKIP in the last European Election. If you are claiming the peace process has been a success, yet 100,000 people are still opposed to it, then it is clear that all is not rosy in the garden. It is rare to see someone go from anti-agreement to changing their position to pro-agreement, so it stands to reason that the figure of 100,000 will steadily grow, the further on into the ‘process’ that we go.

Some of those who themselves agreed, campaigned for and extolled the Belfast Agreement are now themselves openly questioning the wisdom of that very same agreement. This stands as testament to the fact that the Unionist people were conned.

Some of those who campaigned for the Belfast Agreement cannot even justify their continued support for it any longer.

If there was a genuine peace settlement, then people like me would have no place in political activism because we would have nothing to resist. Instead we have this sham of a peace ‘process’, which in effect is little more than a ‘piece by peace’ process, that seeks to plot a course of cultural cleansing and aims to create a neutral Northern Ireland. It is only logical that traditional PUL culture and identity are not compatible with a shared Northern Ireland, hence why the relentless campaign to undermine, demonise and criminalise all expressions of our culture.

I, and many like me, do not want a neutral Northern Ireland. We are British and proud of the fact. We do not wish to neutralise or dilute that, to create some sort of neutral and shared Northern Ireland ‘peace generation’ identity.

If a shared future means selling a little bit of ourselves and ‘toning down’ our culture to appease those who wish to destroy us, then it is not for me.

Unionism and Republicanism are diametrically opposed. There is no common ground on which to stand. Some on the left will speak of the value of working with Republicans on social issues, and I accept there are many vital social issues that affect us all, but one must keep in mind that Republicans want to get Unionists into this ‘common ground’ position, so as they can then manipulate them and neutralise Unionist opposition to a 32 county socialist state.

The continued criminalisation of Protestant culture, coupled with the relentless PSNI/PPS pursuit of former loyalist combatants, leave the PUL community with little or no confidence in the instruments of policing and justice. The lack of confidence in policing and justice is a legacy of the Hillsborough Agreement, when a political lifetime became six weeks and when the ‘pre-condition’ of the retention of the full time reserve was ditched in spectacular fashion. Those examples are only the tip of an extremely rotten ice berg.

If the peace process is to work then the vacuum that allows people such as me to exist must be removed. I am no diplomat or peace maker. I have an interest in politics because I feel we are being walked down a blind alley by the sham process that is dressed up as peace and I feel that that must be resisted.