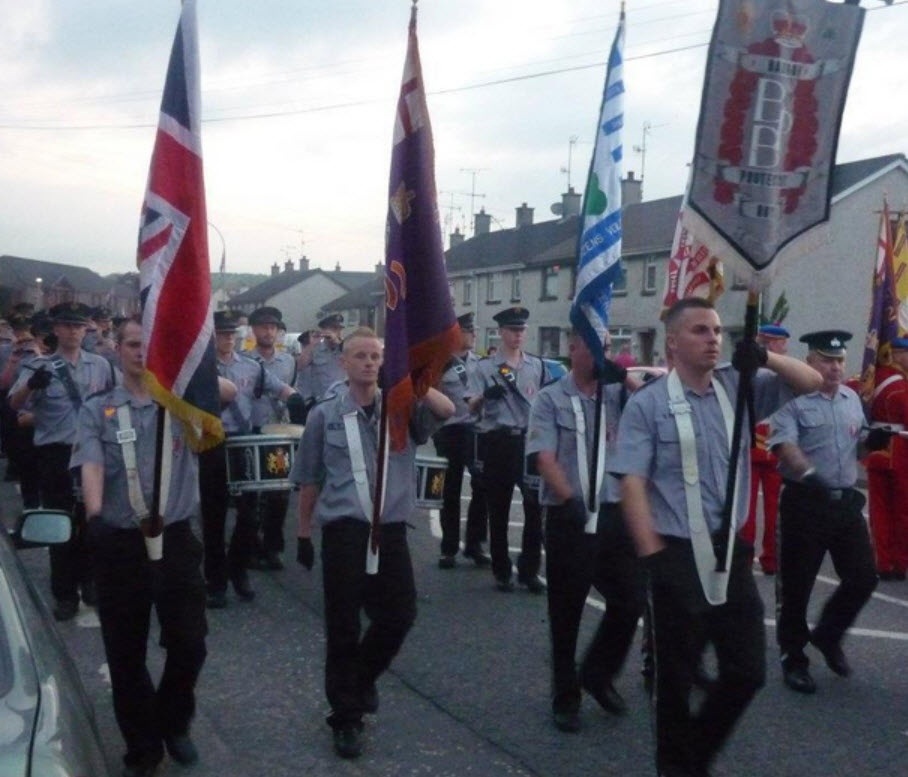 Jamie Bryson adores the Union but advocates everything against which the modern Union stands.

The man from Donaghadee can call for Union Flags on every lampost, call for a return to “biblical based Protestantism” for loyalism, and call on other retrogrades, then without the slightest sense of contradiction or inconsistency, call for liberal and distant London government.

Shameless opportunism if not hypocrisy. Like Jim Allister he can eulogise about the probity of London bicameral oppositional government, then slam the idea of London style LGBT legislation.

He can talk about republican past ad finitum but can forget and champion loyalist horrors, whichever suits. Doublespeak, holding two contradictory beliefs in one’s head simultaneously and accepting both of them.

In his latest piece on eamonnmallie.com he abhors “the slow road to a United Ireland”, yet wants to put his dismembered Ulster into the hands of Whitehall whose active policy has been one of withdrawal.

He criticises mandatory coalition – which is kind of easy – but discounts the incontrovertible reality that this is the least worst option and the output of decades of unionist misgovernment and communal conflict. As David Trimble said:

“Voluntary coalition was a good idea in 1975. It would have worked then if Paisley under pressure from the element which now form the backbone of TUV had not turned turtle.”

The irony is that the voluntary coalition that Bryson pines for was blocked by the same kind of “sell-out” shouting protestant fanatics when it could have worked.

In any case, going back to Direct Rule is not even an argument; London is the architect, steward and guarantor of the peace process, underpinned by Dublin and the international community.

The call for a new deal based on the fact the belief that the Good Friday, Saint Andrews and Hillsborough are all part of an appeasement-surrender process is a gross distortion of reality.

Contrary to Bryson-belief protestants are not being “persecuted“. It’s the inverse, unionism won in 1998 and loyalist culture is flourishing. Republicans suffered an ignominious defeat and underwent a harrowing U-turn on their most cherished principles.

The Union is still strong and could be made stronger, the argument just needs to be made. Relentlessly, unremittingly positive.

Alf McCreary wrote that the great danger to the Union is demented unionists, simultaneously bellicose and lachrymose, self-pitying and narcissistic; and Bryson is carrying on this self-destructive torch with gusto.

In an earlier post Bryson wrote about the towering menace of equality. That piece demonstrated a gaping misunderstanding of recent history and moreover of English and British liberalism and the role that the Anglosphere has had in creating a code of human rights we consider normal instead of being an exceptional privilege denied to most of mankind throughout time. Besides this, that piece was rather repetitive and obscurantist.

Jamie has made quite a mandate-free name for himself as the authentic voice of disgruntled loyalism. A man who will seemingly say anything as long as he is heard. He has a voice and he can use it. He has an argument and he can make it. But for too long the “self-appointed loyalist” type has had a disproportionate hold over the conversation. Their voice and their stories needs a rebuttal and a counter-narrative, at the very least.

What we really need is Bryson-style controversialism from Northern Ireland’s global citizen, less from a Victorian-era loud mouth.