You are at:Home»News & Current Affairs»Opinion»Why is the debate on dealing with the past in Northern gender blind? by Andrée Murphy
Social share: 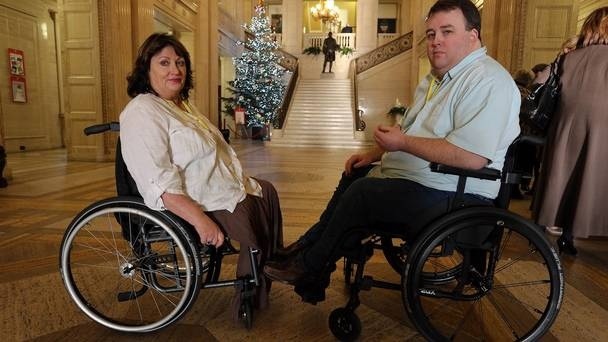 This is an argument for a concerted effort to make gender a specific and identifiable matter of concern within the Stormont House Agreement.

The international debate on transitional justice has recognised that women experience conflict differently and international law has reflected this in recent years.

It is clear that this international development has not managed to make its way into our debate on dealing with the past. This is despite a peace agreement in 1998 which was based on human rights frameworks and the recognition at that time of the importance of gender participation and equality.

Of course since the signing of the Agreement, the path to finding comprehensive mechanisms on how to deal with our past has been a very long one. The parallel piecemeal efforts that have been made have failed to address the needs of victims and survivors or wider society.

Until last Christmas’ Stormont House Agreement there have been two main political processes that have attempted to devise a mechanism to deal with the past in the post conflict Northern Ireland, the Consultative Group on the Past proposals and the proposals from the Haas O’Sullivan Panel of Parties talks. Neither mentioned gender.

This is not that surprising as the debate on dealing with the past in the Northern Ireland has been gender blind. However this blindside has been highlighted and significant voices including Relatives for Justice have been long calling attention to the gender gaps. There were several formal submissions to the Haass and O’Sullivan talks in 2013 which highlighted the international obligation and need to include a gender perspective on dealing with the past.

However at the end of the day these observations did not make their way to the tables of negotiation last Autumn between the parties and the two governments.

But now we have a new reality. Since Christmas Eve there is now an agreed process to deal with our past. This is a significant moment that must be embraced after the many years of failed and piecemeal approaches.
And that means a new opportunity to ensure that women are equal participants at all levels.

Why the focus on gender and the notion of “inserting gender into the Stormont House Agreement”?
Well firstly it is “the right thing to do”. We must ensure that women are not excluded from the processes associated with the Stormont House Agreement. Awareness of how exclusion can occur due to masculine structure (and given that gender didn’t get to the tables so far we can hardly deny the masculine structures to date), can ensure that we build the processes to be participative and inclusive and that women are accordingly equal participants.

It will not happen by default. At no point during the development of the formal processes regarding Dealing with the Past has gender managed to make its own way onto the printed pages of recommendations or agreement. Without specific attention and active insertion the processes will remain gender blind.

I make no apology for my grassroots bias when it comes to the issue of participation. I am focussed on the women who have been bereaved and suffered conflict related harms being equal participants to any process and this participation is safeguarded with rights.

This is a critical issue and needs to be ensured at an early stage through the application of gender targets in each strand of the Agreement. This is both achievable and desirable. While quotas may be problematic, targets are not – and all parties and both governments should be publicly asked to sign up to the introduction of gender targets and an equal participation clause in their relevant legislative domain.

But we cannot focus on this discreet, arguably privileged, part of participation and overlook the significant effort that will be required to ensure equal participation of women engaged by the strands. This is particularly the case given that the majority of these women will have been excluded by multiple factors in processes to date. The barriers to participation will be multi-faceted and complex.

What do we mean by equal participation?

First and foremost it is not just about equal numbers of women being involved in the four strands. For example without applying any interrogation to a process having three women and three men participating in six investigations might look on the face of it as if women are participating equally. Of course that would be to ignore the evident implications of 91% of the deaths being male. It would ignore that entire families experienced the killing and it would ignore that depending on the roles and relationships in the families that women will have experienced that killing differently.

There is a real danger that the failings of previous investigations will be re-perpetuated with women being entertained only as next of kin or eye witnesses to deaths rather than survivors of conflict related harms in their own right.

There are obvious implications of the framing of two of the strands exclusively around deaths. It is arguable that this was necessary and there is a linear correlation between this and the ongoing ECHR failings of the British governments regarding inquests and historic investigations. However with the stark statistic of how our conflict was experienced, it means that on the face of it, the exclusive truth recovery and investigation mechanisms will focus 91% of their time on fatal injuries sustained by men but the limited nature of the investigations should not preclude the understanding that women will have experienced bereavement differently, and accordingly will come at participation in the investigation differently.

Women survived and will be the active and living participants in these processes. So we need to ensure that they have the resources and tools to become equal participants, where before they have been disenfranchised by the masculine domains of policing and the courts.

Process is key to ensuring equal participation. If a woman has been silenced by the long term effects of trauma, fear of further attacks, fear that her surviving children may be open to attack, and prioritising the physical emotional needs of her surviving family – then the process of recovering voice and narrative is deeply impacting.

Obviously many parallel processes will be engaged for that woman. Her equal and meaningful participation will not be possible if we replicate previous investigative mechanisms which only served to compound her silence.
How we ensure that she will have equal participation in the Stormont House Agreement mechanisms is the challenge.

How to “Apply” a gender lens
This is where we can be creative, or rather begin to apply a gender lens, to how we define the resources for families that are mentioned in the Agreement.

There is explicit reference to families having access to counsellor/advocates and family support. Separately there is commitment to a mental trauma service for victims which links public and community providers.

If we apply a gender lens to the question of how these agreed resources might work to explicitly ensure that women have the resources to participate in the Stormont House Agreement then we can begin to reimagine what participation might look like.

Firstly we must begin to link participation in investigations to the process of recovery from harm. It is long established that recovery of truth or justice is linked to the recovery from traumatic events. We must stop the consistent and damaging public policy of isolating these processes from each other and recognise their holistic lived relationship in the families of those who survived conflict bereavement. The delivery of trauma support should be directly and appropriately linked to victims and survivors’ engagements with the SHA mechanisms.

Secondly we must allow space for longer term engagements by families and women with processes. If a woman has no living memory of her father and is recovering that memory while trying to engage with a live investigation she will need support at multiple levels to engage effectively. This may well have implications for different strands of the SHA needing to advance at different speeds according to families’ needs. However if we have waited this long – 17 years since our peace agreement – lets ensure the process is delivered appropriately.

Thirdly, since the debacle in the Victims Service many families have reported that they were re-traumatised with the unnecessary retelling of traumatic events. If a family has engaged with the HET, PONI and then with civil litigation and with the Victims Service they may well have retold their story six or seven times and will speak about re-traumatisation. This disproportionately impacts on women as the main next of kin and survivors.

The SHA has four strands to which any survivor of conflict bereavement may at some time contribute or participate in. Aware of this, the mechanisms should be built to ensure that, should they choose, a woman can give one statement which includes the events and their impact, and that this can be protected to ensure it can be used within and between the processes. Just as a survivor of sexual assault is afforded the process of protection the same principle of care should apply. Such a statement could be added to appropriately as information is uncovered or as a woman may self-identify further related conflict related injury.

The Restrictions of the Current Framework

Undoubtedly there are women who are on the face of it automatically excluded from the Stormont House Framework.
Women and indeed men who were not bereaved but who suffered other conflict related harms may find it hard to see themselves within the Frameworks. It is critical that the Oral Archives and the thematic strands are designed to ensure specific gender focus.

Men and women experienced significant gender based violence during our conflict. All of those who will be charged with responsibility will be obligated to ensure that this experience is sensitively identified and recorded. The narrative of our conflict will be utterly incomplete without it and to ignore it will arguably have significant human rights implications.

There is a need to apply a gender lens to ensure we recognise gender based harms when they are not automatically identified as such by those who experienced them. For instance the impact of attacks on family homes during the conflict disproportionately affected women who experienced the loss of safety and traumatic threat to their family. This is not just a statistical component of military action during our conflict, it is a pattern of systemic harm experienced by women. The difference is significant to our understanding of conflict and the linked recovery from trauma.

There are many other such harms to be uncovered and recorded. There is much work to be done.

A suggestion would be that at this critical stage – a gender unit for the implementation of the Stormont House Agreement could be established to begin an holistic approach to this matter.

Andrée has worked in Relatives for Justice (RFJ) since 1999. She has worked first voluntarily in RFJ and now as its Deputy Director with responsibility for operational and budgetary management. Andrée has been a key voice in the promotion of a focus on women in the debate on how to deal with our past and on the need to ensure that those who have experienced the worst of our conflict have the biggest say in how it is addressed. Committed to development and process based approaches Andrée consistently promotes the values of holistic and transgenerational support.