You are at:Home»News & Current Affairs»Opinion»Why did our party leaders go AWOL? By Eamonn Mallie
Social share: 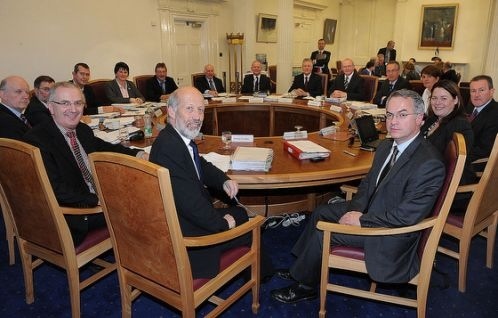 This was a curious General Election campaign in Northern Ireland. Curious in the sense that those charged with respective leadership in their parties when called upon, failed to stand up and be counted. In fact most of the leaders went missing.

Last night’s BBC – so called ‘leaders’ debate’ gave us only one party leader Mike Nesbitt out of the five Executive parties – What was all this about?

The SDLP’s Dr Alasdair McDonnell disappeared mid-way through the election campaign leaving the heavy lifting on screen to former leader Mark Durkan. He hung (intentionally or unintentionally) Mr McDonnell out to dry on the ‘dual mandate’ issue choosing to distance himself from this practice.

Where was DUP leader Peter Robinson? One wonders what is the background to his disappearing act apart from a few TV/radio appearances prompted by the Jim Wells débâcle.

Is it a question of Peter Robinson’s sense of shame at not being in a position to defend his own East Belfast seat?

I can’t find any reason for Alliance Party leader David Ford being virtually invisible throughout the campaign. Is it because beards are going out of fashion and he feels he can’t face up to this?

Mr Ubiquitous Mike Nesbitt played the rōle of God for the DEFUNCT party… turning up everywhere to defend his underlings clearly deeming that he knew best… shoring up a sectarian DUP/UUP pact which speaks out of both corners of its mouth.

One missed the presence of the ‘all cylinders firing’ or shall we call him ‘the rebarbative’ Jim Allister at the top table, zapping all comers.

Talking about being missing – or better still absent… I now realise Sinn Féin President Gerry Adams has opted for abstentionism from our screens in this election. How partitionist Sinn Féin has grown. That party is being bashed day and daily for not taking its seats at Westminster – I wonder will the next Unionist campaign against Gerry Adams focus on ‘a border incursion.’

Ought we name our politicians ‘The Quare Fellas.” They’re a rum bunch.