You are at:Home»News & Current Affairs»Opinion»Silence of the Shinnerbots – and Shame of the Media – by Jane de Courcey
Social share: 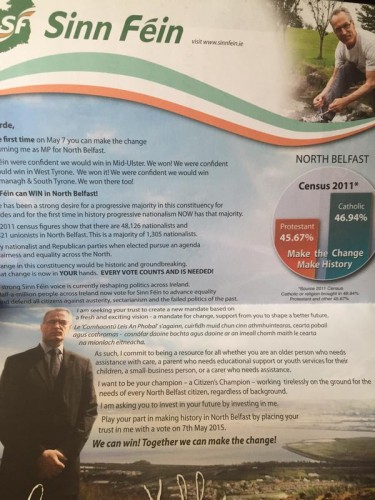 I had a dream the other night. Not a noble, impassioned dream in the style of Martin Luther King, but a nasty, disconcerting little dream which started with an image of Gerry Kelly tying his shoelaces.

(An image of Gerry Kelly can never herald the start of a pleasant dream.)

SF’s North Belfast standard-bearer seemed to be tying his laces just a wee bit too tight for my liking and I wondered what – or who – he was thinking of. And then I saw the rest of the leaflet…

Dreams can, as we all know, be difficult to interpret but in this case the message seemed clear: ‘Us Taigs have outbred youse Prods, so youse uns are toast.’

As Gerry tied those laces (and him pictured alongside a delightful tree-lined stream), I awoke in a cold sweat. Was Sinn Féin really playing the ultra-sectarian card? Had someone at party HQ really thought this was a good idea?

Or was this a case of Gerry Adams’ ‘Trojan Horse’ spreading its Republican legs and racing to the electoral finishing líne in a two-horse race?

Twitter was ablaze with justifiable outrage at this revolting and squalid little piece of toilet-paper politics, as Tweeters of all backgrounds roundly condemned a clear attempt to turn the election into a religious headcount.

For once, the Shinnerbots were silent. Normally vigorous in their defence of the Republican ideal, SF’s keyboard warriors kept their typing fingers firmly in their pockets.

All attempts to engage with the usual suspects proved futile.

There was no denial and there was no attempt to defend. Just silence. The Silence of the Shinnerbots. Danny Morrison broke ground, responding to a thread with fast-increasing grumpiness and saying: ‘Journalists, media pundits, commentators, all use these statistics as a rough rule of thumb.’

(Another tweet from a leading SF politician in North Belfast seems to have disappeared from my timeline.)

Yet there was an even more disturbing silence. The silence of the media. One might have expected Stephen Nolan to be, as he irritatingly puts it, ‘all over the story’. Not a mention. Same with William Crawley and Talkback. It didn’t even merit a line in BBC news bulletins throughout the day.

SF weren’t invited to defend the leaflet, or even to claim it was a cruel hoax perpetrated by them devious Prods. Ignored totally. Yet had such a tawdry flyer issued from the PUL community, Nolan and Co would have been in full attack mode.

I think the colloquial expression is ‘creaming themselves’.

And the same goes for all of the media, both print and electronic. Zero coverage.

What SF tell their electorate on the doorsteps and say on the radio or telly might be two diferent things, but surely they have to be held to account in some way.

The mainstream media went ballistic over the Belfast Telegraph piece on women in politics (rightly so), but why was this story so completely and totally ignored? There couldn’t possibly be an agenda…could there?

Perhaps I’d imagined the whole thing, even the full-page ad in a local paper which screamed ‘For the first time in 130 years there is a NATIONALIST MAJORITY in North Belfast. YOU CAN WIN’.

Maybe it was all a dream. After all, Gerry Kelly is Sinn Féin’s Mr Fun and there he was, in my new reverie, canvassing a Star Wars Stormtrooper on a North Belfast doorstep.