You are at:Home»News & Current Affairs»Opinion»Roy Fisher and the Gerry Kelly flyer
Social share:

A letter written to the editor of the Observer in 1891 read:

“Sir,– It has been wittily remarked that there are three kinds of falsehood: the first is a ‘fib,’ the second is a downright lie, and the third and most aggravated is statistics.”

The statistics used on Gerry Kelly’s election flyer in North Belfast are that of tribe, or “religion or religion brought up in” as the Northern Ireland Statistics and Research Agency (NISRA) put it. Journalistic shorthand or a lack of understanding of the statistics can result in inaccuracy about what is being quoted and how the demography has evolved. I’ve argued against the practice of regressing atheists to their religious tribe for some time and have campaigned (unsuccessfully thus far) to change the statistical processes. 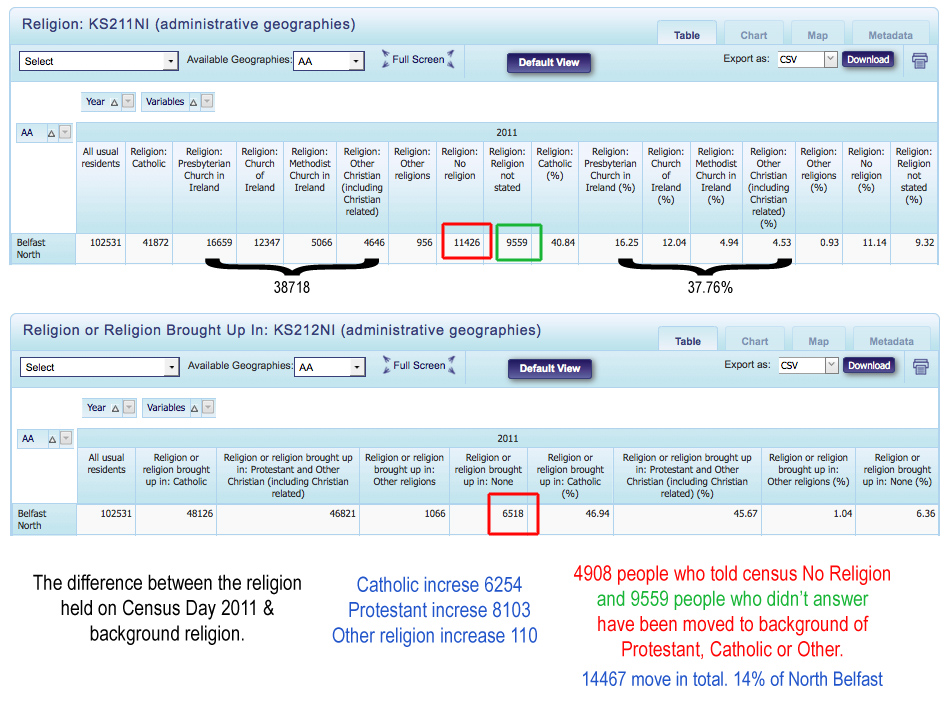 The Catholic background statistic printed on the flyer consists of three types of census respondent:

The ‘No religion’ statistic of 6.36% consists of those who told census they have no religion and were not brought to church in childhood. Therefore this set of statistics will not show any dissent from a religion of birth. In my opinion this a political and statistical assault on equality and the right to freedom from religion.

Looking at the responses to the question on religion, the 2011 census found 11.14% of North Belfast identified to be of ‘No Religion’, 0.93% identified to belong to an ‘Other religion’ and 9.32% didn’t answer the religion question. The population self-identified as 40.84% Catholic and 37.76% Protestant and Other Christian (including Christian related).

Gerry Kelly changed the identities of North Belfast citizens when he interpreted the background religion statistics to represent nationalists and unionists. His flyer claims 48126 nationalists and 46821 unionists, calculating a 1305 nationalist majority.

Firstly these numbers refer to the Census findings of 48126 ‘religion or religion brought up in: Catholic’ and 46821 ‘religion or religion brought up in: Protestant and Other Christian (including Christian related)’. The census does not question voting habits or whether someone has a nationalist or unionist identity. From the NI Life and Times Survey in 2013 the sample reflected 53% of stated Catholics identified as nationalist, while 64% of stated Protestants identified as unionist, and most of the rest said they were neither nationalist or unionist.

Of those with No religion, 11% identified as nationalist, 21% unionist and 63% said they were neither nationalist or unionist.

Secondly the census statistics include people who aren’t of voting age. NISRA provides information based on religious background and age, and the data for North Belfast showed in 2011 that there were 23855 residents aged 0-17 (23.3% of the population). There were 12469 Catholic background children and 8432 Protestant and Other Christian (including Christian related) background children. This means Kelly’s claimed nationalist majority figure of 1305 (which was actually background Catholic religion) can’t be translated to votes.

From the statistics above the trend of a growing Catholic population is clear, Sinn Fein could have shown the Catholic religion to have a 3.08% dominance, rather than the 1.27% for background religion, and defended it when criticised for religious head-counting as fact. The census statistics also show there is greater dissent from Protestant religions than the Catholic religion throughout Northern Ireland, which Sinn Fein could potentially use to its advantage if it wishes to go down this route of encouraging voting by providing religion statistics. Sinn Fein could also challenge the inclusion of Other Christian (and Christian related) within the Protestant statistic – although I don’t know which denominations may not consider themselves as Protestant within this grouping.

However in doing so Sinn Fein would lose credibility in its claims to be a progressive party, standing for equality for everyone whether Catholic, Protestant, other religion or dissenter.

That’s their choice. However, when using statistics on election material they should certainly be labelled accurately, and religious background statistics should never be altered to claim knowledge of voting intention or ownership of that voter.

While Kelly has altered identities within his flyer making it sectarian propaganda, the sectarianism of this election has also been fuelled by a unionist pact. Sectarianism is not a one-sided argument, my challenge is not just to Sinn Fein, or pact-making DUP and UUP, but to all the parties of the Assembly – change the system to respect self-identification and release us from tribal identities based upon the religions of our parents or guardians.

Roy Fisher is a market trader based in Belfast.

Social share:
Carál Ní Chuilín DUP Gerry Kelly ireland Northern Ireland sectarian sectarianism Sinn Fein
Previous ArticleSilence of the Shinnerbots – and Shame of the Media – by Jane de Courcey
Next Article Everything you need to know about how a government is formed if there is a hung parliament

Roy Fisher is a 35 year old printmaker who sells original, limited edition prints, screen printed gifts and greetings cards in St George's Market. Originally from Fermanagh, he has been living in Belfast since he studied for his honours degree in Communication, Advertising and Marketing at Jordanstown. Roy takes a keen interest in political, religious, and cultural issues. He previously worked in the media as a Public Relations executive in the early 2000s, but is now self employed in the art world.