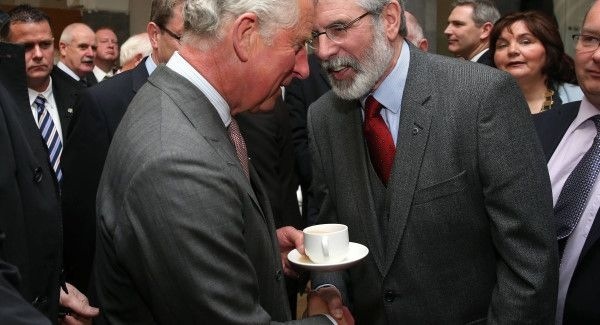 I am not a royalist but I am not an iconoclast.

I have reservations about how Prince Charles appeared to treat his former wife Diana but I have no right to obsess with the private lives of individuals.

I have been trying to digest and decipher what we have witnessed in recent days in the West of Ireland where I found a wife and where our second daughter now lives with her family.

The trip by Prince Charles was occasioned primarily to visit Mullaghmore where his grand-uncle Earl Mountbatten and members of his family were killed by the IRA in August 1979.

I want to address the significance of the royal visit at various levels.

Firstly at an emotional level, Prince Charles like any other human being, suffered as a result of the IRA’s killing of the man of whom he said:

“For me, Lord Mountbatten represented the grandfather I never had. So it seemed as if the foundations of all that we held dear in life had been torn apart irreparably.”

What Prince Charles added speaks volumes for the journey upon which he and the royal family have embarked:

“Through this dreadful experience, though, I now understand in a profound way the agonies borne by so many others in these islands, of whatever faith, denomination or political tradition.”

“At the time I could not imagine how we would come to terms with the anguish of such a deep loss,” he said.

“I have very little in common with a member of the British royal family, but at a human level… [we]have an awful lot in common in terms of bereavement, suffering and, I would like to think, forbearance.”

That word ‘forbearance’ was originally deployed in a political context by King George V when he opened the Northern Ireland Parliament in 1921 and was used again by PM David Cameron in his address to the Northern Assembly in June 2011:

“I appeal to all Irishmen to pause, to stretch out the hand of FORBEARANCE and conciliation, to forgive and to forget, and to join in making for the land which they love a new era of peace, contentment, and goodwill.”

Gerry Adams whose hand Prince Charles took knew grief too, having witnessed some of his Ballymurphy neighbours in August 1971 die at the hands of the Parachute Regiment of which Prince Charles is Colonel-in-Chief.

This is how Mr Adams summed up his encounter with Prince Charles:

“Both he and we expressed our regret for what happened from 1968 onwards.
We were of a common mind and the fact that the meeting took place, it obviously was a big thing for him to do and a big thing for us to do.”

For rival political parties in Dáil Éireann for whom Adams represents the devil incarnate with the Royal visit they were routed.

Adams stole their clothes Media-wise at home and abroad. I was back on the airwaves in Australia for the first time in a decade. Adams is still world news.

Speaking at Galway university, Prince Charles began his trip by praising the “wonderful spirit” of the Irish and the “fun of being in Ireland”.

“There is a magic, a unique magic about Ireland which is totally irresistible,” he said.

“So wherever I go in the world and meet Irish people, I promise you, it always makes me feel better.”

What we are witnessing before our eyes is the Royal family cutting loose from the political establishments in Ireland and England in its relationship with Ireland.

The Queen was in the vanguard of this new era, when she spoke Irish in Dublin Castle four years ago. Those few words spoke volumes. Firstly, having bothered to learn Irish she showed respect and secondly she acknowledged nationhood.

The Queen’s laying a wreath in The Garden of Remembrance to salute those who gave their lives in the cause of Irish freedom was symbolically truly important.

The Royal household is still on this track.

Martin McGuinness has won a certain affection in the hearts of the wider community both catholic and Protestant on the island of Ireland despite his admission to his past. This is not so in the case of Gerry Adams. The Sinn Fein president is controversial and a constant target for Dublin politicians and the Independent newspaper group.

For this reason Prince Charles’s willingness to take Gerry Adams’s hand was akin to Taoiseach Enda Kenny and his colleagues getting hit with a blow of a dead cat.

The Royal family is locking Republicans into a new political equation in a long term investment.

The Queen and her family have made a calculation that in entreating so publicly with Republicans they are not suffering as a result. Just as the Queen’s visit to Ireland was world news so too has Prince Charles’s trip. He has proven a big hit with the Irish public everywhere he has gone.

He is coming across rejuvenated, potentially regally, appearing to have finally arrived ready for throneship.

I set out stating I am not a royalist. That is true, however I live, read and write history. The Royal household is on a winner here. Kate, Wills and the children have not yet visited Ireland. The champagne is on ice.