You are at:Home»News & Current Affairs»On being an eyewitness to a stuttering, stumbling NI General Election by Eamonn Mallie
Social share: 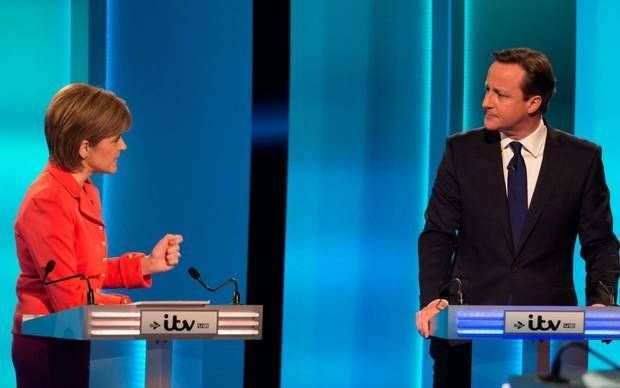 Thursday is General Election day. Have you noticed? Apart from the proliferation of posters with familiar and unfamiliar faces gawking down at me from high up on lamp posts little else has passed during the local campaign to register with me.

I found the TV debates involving local politicians anodyne and wholly
predictable. I am always listening for the ‘big idea’ to fall from someone’s lips. It simply doesn’t happen here. Can this be put down to some deficit in our education system? Will someone explain why we have to be consistently subjected to the mundane and the banal more often than not along sectarian lines?

The wheels consistently came off the wagon when our politicians were
under close quartering interrogation… be that DUP/SF or which ever party put forward a spokesperson.

These guys are simply unprepared, badly researched or incapable of dealing with concepts and political thought. I take it by now all of you with credit card debt have gone to Sinn Fein to have your debt written off. Wouldn’t it be nice if it were so easy?

The DUP continued to cosy up to the Conservatives with Ian Paisley Junior – hand outstretched replete with a big begging basket while the ‘sophisticated’ Nigel Dodds was preoccupying himself with army numbers etc. and seeking to chloroform the National audience about the modern party on social issues of which he is a member and deputy leader. That is how it was – enter Jim Wells.

Nigel Dodds, Gregory Campbell and to a lesser extent Peter Robinson have spent a lot of their time during the last ten days firefighting in the wake of Mr Wells’s controversial remarks in which he said “you don’t bring up a child in a homosexual relationship. That a child is far more likely to be abused and neglected.”

There are many other observations one could make about the election locally: the crassness of Gerry Kelly’s flyer in essence – vote nationalist to keep unionists out.

The Ulster Unionists appear to have little or no mojo with the exception of Jo-Anne Dobson seeking to slay the DUP’s David Simpson. Naomi Long under fierce pressure in East Belfast has harvested a lot of goodwill right across Northern Ireland through her television and radio appearances.

While DUP leader Peter Robinson made the occasional appearance on TV and radio the old barking snarling dog wasn’t there electorally. One senses he is a wounded man, feeling a victim of his incapacity to defend his home patch electorally.

The campaign fought by the other Robinson, Gavin Robinson mystifies
me. Where has he been? Why has he been below the radar? Why has he not
been promoted as the party’s new fresh talisman? He is after all, deal or no DUP deal with political representatives of former paramilitary entities, facing a formidable competitor in sitting MP Naomi Long.

SDLP leader Alasdair McDonnell has fought a low key campaign too with
some of his juniors stepping forward to be the standard-bearers for the party.

Sammy Morrison continued to pump out countless TUV press statements. The anti Sinn Fein thrust through the combined forces of the DUP, UUP, UKIP, Conservatives and TUV ripped the guts out of the election campaign restricting rival pro Union parties space in which to open the throttle.

What the local election campaign lacked was replaced in spades by the
news worthiness of the campaigns in Scotland, England and Wales.

We were exposed nightly to a feast of television viewing with the little lady from Scotland, the fox who got in through the front door and right into the Tory/Labour chicken coop.

Nicola Sturgeon wiped Ukip leader Nigel Farage from the front pages
and helped to diminish his relevance even though he didn’t need much
help given that each time he appeared on TV he pushed the self destruct button.

We are down to the wire and after the election if the average of the opinion polls through the election campaign throw up the expected outcome of a hung parliament we’ll remain at the wire for a little longer. I can’t wait for the outcome. Then the real fun will begin.

Social share:
Cameron General Election Northern Ireland
Previous ArticleEverything you need to know about how a government is formed if there is a hung parliament
Next Article ‘The Máirtín Season has a problem – Gerry Kelly’s flyer’ by Brian Spencer