You are at:Home»News & Current Affairs»Opinion»Must politics always be about ‘our side winning?’ Dave Maley rips open this Northern Ireland can of worms…
Social share: 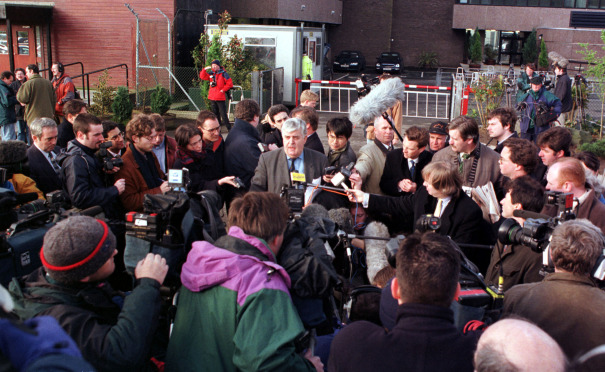 Kyle Paisley appears to have been so intent on finding fault in Jamie Bryson’s Belfast Telegraph interview that he failed to notice perhaps the most important statement contained within it. Obviously anything anyone says in public in this jurisdiction has to be taken with a pillar of salt, but let’s take Mr. Bryson’s statement ‘who knows, if I was born in a nationalist community I may be a hardline republican,’ at face value.

I see hope therein, because for me it implies that what really matters to Mr Bryson is the right to defend his identity and community, not the actual colours on the fleg. Who would deny him that?

“Sinn Fein/IRA” comes the rejoinder chorus; meanwhile, others respond “Unionism, 1922–1971, if he had indeed been born Seamey O’Bryson”.

Proponents of both views will argue their case, but of more importance for me, Mr Bryson’s statement highlights the fundamental question:

Was/is the conflict about which identity is right, or about the right to an identity?

Both scenarios run the risk of enmity and division, of the risk of a descent into violence; but crucially there is far more scope in the second for a peaceful resolution, and Mr Bryson looks to be in the latter camp.
Just as the risks in either case are similar, so are some of the potential scenarios that can follow:

A. One side is sufficiently well-resourced to be able to dominate the other

The first two, thankfully, have been and gone; there is little evidence that the third would ever gain much traction, and it was Option D that was the breakthrough achieved by the Good Friday Agreement in 1998. Now, as the almost forgotten man of Unionism reminded us last week, the DUP is not a signatory to the GFA.

Indeed, one suspects they would revert to Option A the moment they thought they could get away with it; but if the GFA does not form the basis of the government which they currently lead then what does? It is certainly the only agreement that has the legitimacy of being backed by referendums north and south.

I think in the wake of a General Election, and Brian John Spencer’s analysis of its implications for the main parties, that we should remind ourselves of the basis on which we no longer have armed conflict on our streets:

“In coming to that agreement, my party had a clear philosophy throughout. In Northern Ireland, we should have institutions that respected the differences of the people, and that gave no victory to either side.”

These are the words of John Hume the former leader of the almost-forgotten party of Irish Nationalism. Viewing every initiative or proposal for political progress here from this premise offers, in my opinion, the best chance of staying on the path to peace, but I think it in danger of being forgotten.

Whenever someone cries about the inability of our politicians to make progress on issues such as parades, flegs and “the past”, I wonder do they really understand the difficulties involved? The tightrope that needs to be negotiated to hold to the principle of no victory for either side is perilous in the extreme, especially when disputes are further complicated by one side seeing the present status of a particular issue as a God given right, whilst the other sees progress on that same issue as righting a wrong. Throw in anti-austerity and Sinn Fein are wanting to traverse the tightrope on a unicycle, with the DUP starting simultaneously from the opposite end.

A few weeks ago I attended the annual Dunleith Lecture organised by the Integrated Schools sector. I was shocked to hear supporters talking openly about how depressed they were that progress towards a fully integrated education system was so slow. Did they think that back in 1998, 71.6% of the electorate agreed to jettison their culture and history, and become identityless citizens? I hardly think so: rather, having seen how disrespect for identity can be so destructive, they signed up for a societal contract which requires each citizen to recognise that other citizens hold different views, that neither your view nor theirs is necessarily right, and that therefore you should afford their views and aspirations the respect that you want them to afford yours.

That contract is a huge ask in this place; Northern Ireland may be short on natural resources, but it has a seemingly limitless supply of selfrighteousness, and it isn’t solely from religious sources. I think the best for which we can hope is that people at least behave as if they respect someone else’s identity, even when the reality is far from being the case.

The same applies at the macro level, where we have whole political parties convinced that they have a monopoly on either truth, the moral high ground or both. David Ford recently told his party:

“It is clear that despite the commitment given by all five parties to reform government to make it more efficient, at the first test, to reform teacher training, four of the parties ran away and bowed to sectional interests.”

So the parties that represent the 92% of the electorate that didn’t vote Alliance are wrong? The Executive decided that maintaining choice and diversity was more important than a 0.4% saving in the Higher Education budget; but that isn’t how the Alliance Party spins it, because they believe they are right which they are entitled to do, but genuine respect for identity is jettisoned somewhere in moving from “I believe that I’m right” to “therefore I’m going to try to impose what I want on everyone else”.

It’s an approach to diversity that can make you a candidate for a fatwa in Bradford.

Is there a new battle looming between those who want to coerce people into the neutralisation of identity, and those who either regard identity as sacrosanct, or else at least recognise that you impose on it at your peril?

Does Jamie Bryson in fact have a more realistic concept of our future Shared Society than David Ford?