You are at:Home»News & Current Affairs»Opinion»Loyalist Jamie Bryson hits back at Kyle Paisley who challenged him to defend that for which he stands
Social share: 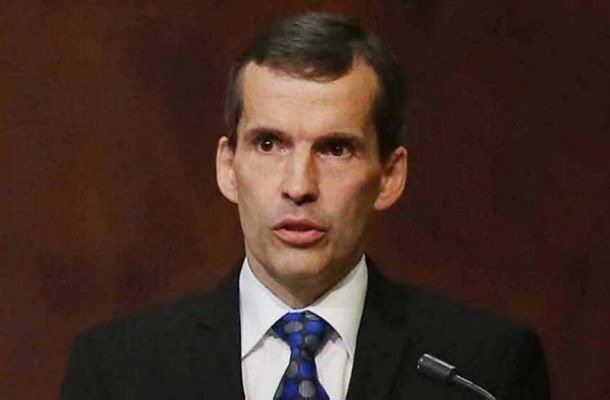 Rev Kyle Paisley has provided a commentary of my Belfast Telegraph interview; I feel it important to respond to this article because I find it astounding on many levels.

Before I respond to his article I think it is important to set in context Mr Paisley’s background. He is of course the son of the former DUP leader, the late Ian Paisley. He is also a minister in the Free Presbyterian Church in England. It is clear that Kyle has some sort of issue with the DUP, as a quick google search will find him popping up to condemn the party his father formed over almost every controversial issue. Quite why a minister in England would feel the need to do this is beyond me, I can only conclude that he believes-wrongly – that because of his second name he has some kind of divine right to act as the moral conscience of Unionism, a moral compass that appears extremely skewed on his part.

Mr Paisley begins by defending the system – the mandatory coalition; he decrees it as ‘democratic.’ Further to this he even provides us with a quote from the Oxford dictionary. A couple of paragraphs later he concedes that mandatory coalition “is by no means a perfect form of government.”

If you were to ask the most elementary politics student to give you a couple of examples of what the cornerstones of democracy are, I would suggest the majority would say it is the right to vote a party out of government and the right to an opposition. Of course here in Northern Ireland we have neither of these versions of democracy. Let us not forget that Ian Paisley, Kyle’s father, campaigned strongly against the Belfast Agreement and mandatory coalition and his deputy who is now the joint First Minister said that “the only cabinet the Provos should be in is made of wood and has brass handles.” I think I would like to hear Kyle reveal whether he opposed the Belfast Agreement at the time or was he an outspoken yes supporter?

Perhaps I should expand on the point I made in the telegraph that prompted this particular outburst from Kyle Paisley. I stated that what we have in Northern Ireland is peace with a gun to its head, and so it is. Sinn Fein/IRA, who Kyle Paisley seems to laud as some kind of great peace makers, have not once apologised for their campaign of terror. As a matter of fact they actually revel in it. What does this logically tell us? It is quite clear that if the IRA feel their activities were justified and still to this day stand over those – with this knowledge it is then the only logical conclusion to which to come that their participation in our bastardised ‘democracy’ is no more than a tactic by Sinn Fein/IRA. (DUP members aren’t allowed to say Sinn Fein/IRA anymore. It doesn’t play well with the fact they are sustaining them in Government).

If Sinn Fein/IRA felt tomorrow that the ‘democracy’ which is designed to grant them a mandatory veto over the country they are pledged to destroying was no longer to their liking, then they would have no problem going back to what they know best. This is a point that is seemingly lost amongst the minds of the pro agreement masses that buy into the flowery rhetoric deployed by Sinn Fein/IRA. Look beyond the honeyed words and see the truth.

Sinn Fein/IRA did not wake up and suddenly become democrats. They decided they needed to change tactics to achieve their goal and at this point in time they are gaining more from peace than war. Make no mistake about it, if they thought that more would be gained by war than peace, they would have no hesitation in dragging us back into their campaign of terror. Only a fool would believe otherwise.

Kyle Paisley also makes reference to IRA decommissioning – yes the old sackcloth and ashes of decommissioning. Of course there was no sackcloth and ashes, and there was no visible decommissioning, instead we had to take the word of Father Alec Reid, once described as the ‘Provo priest’ and a close confidant of Gerry Adams, who of course is
a man well renowned for telling the truth! Of course I suppose Kyle Paisley would prefer we didn’t mention the fact that so called ‘dissident’ groups have used, and are using, IRA weapons and semtex? Who do we think will exact revenge for the murder of Jock Davison? It will be the so called ‘dissidents’ as a favour for their former comrades who will take on the so called criminals who murdered Jock Davison. This of course will be another occasion when Sinn Fein/IRA will be happy enough for the gun to be used again, only this time their dissident ‘enemies’ will pull the trigger. It is not often we do favours for our enemies now – is it?

Kyle Paisley then goes on to enter into more personal attacks on me. He accuses me of delusions of grandeur. This from the same person who is the local media’s favourite tool when it comes to condemning Unionism, a tool deployed from England I may add. Mr Paisley of course wants St Patrick’s flag to fly over City Hall and thinks that designated days is a good ‘compromise’.

The icing on the cake however is this remark by Kyle Paisley ” it is sacrireligious nonsense for him to draw inspiration for his small, fading cause, from Christ”. I wonder did he make the same remarks about his own brother, Ian Paisley Jnr, who last week gave thanks to God for his election victory? Does Kyle Paisley condemn the previous words of the founder of the Church of which he is a minister, his own late Father, Rev Ian Paisley? Was it sacrireligious nonsense when Ian Paisley claimed to be doing God’s will? Or, is it ok to draw inspiration from God as long as you subscribe to the same political viewpoint as Kyle Paisley?

The whole commentary piece by Kyle is riddled with hypocrisy; you could drive a bus through it. I think that the mind that is at sixes and sevens is that of Kyle Paisley. I hope he responds and answers the questions I have raised in this article, or perhaps we will not hear from him again until he decides to use his second name to help prop up the shameful peace process or to condemn his own community.