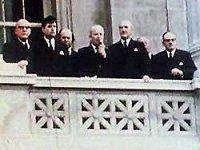 The Welfare reform crisis has inadvertently provided Unionism with an opportunity to at least try and undo some of the monumental errors of judgement that have been made in the past 17 years. Should the gridlock continue it seems that eventually Westminster will have to step in and legislate over the head of the devolved structures at Stormont. In this scenario how ludicrous would it be for a ‘Government’ to continue when they cannot even agree such a basic issue as welfare and by extension a budget?

The only option would be to collapse Stormont and thus finally expose the myth that the peace ‘process’ is working or indeed that it ever worked. It was never anything other than a slow road to a United Ireland, clouded in ambiguity and with a big concession meter that could be fed every time Sinn Fein demanded more concessions to ‘protect the process’.

A return to Direct rule is by no means ideal, but if by the law of unintended consequences it gives Unionism an opportunity to use any influence that the DUP & UUP have at Westminster as leverage to undo much of the damage caused by those very two same parties in the Belfast, St Andrews and Hillsborough agreements – then it can be viewed as an opportunity to right some wrongs.

The DUP, and many of their supporters, not long ago dismissed the idea of a return to direct rule. The DUP called me and the Ulster Peoples Forum ‘bankrupt of any political strategy’ when we called for a return to Direct rule, yet almost three years later they themselves are lurching ever closer to that position. Indeed they are talking up the possibility of the Secretary of State taking some powers back to Westminster. Of course the On the Runs scandal helped prop up the
peace process in a strange way – it allowed the DUP to argue for the merits of our current devolved institutions because they could point to the on the runs scandal and say ‘look what happened the last time we had direct rule’.

For those within the middle ground of Unionism, surely a return to direct rule is only logical? To take the gay marriage debate as one example, arguments have been put forward by some within the centre/left of Unionism that given Westminster has legislated for gay marriage – it is actually segregating us from the Union by being the only part of the United Kingdom not to introduce the same laws as Westminster in regards to gay marriage, which has been given Royal Assent.

The logic of this argument is that those persons perpetuating it could not then support the Stormont institutions because given we are lumbered with the perverse system of mandatory coalition, this makes us the only part of the United Kingdom with this system of Government, therefore if we follow the logical trajectory of the argument put
forward by those occupying the centre/left ground of Unionism – they would have to support a return to direct rule because they could not, by the own logical trajectory of their position on other issues, support the continuation of a system of mandatory coalition which I, and many others, see as a perversion of democracy and which denies us the same democratic systems of Government which operates within the rest of the United Kingdom.

Many of those in the centre/left spectrum of Unionism are taking up the same position as Sinn Fein in regards to welfare reform. The hypocrisy of this is mind blowing. The position of Sinn Fein is to reject a welfare package that is more generous than any within the rest of the United Kingdom. Surely those within Unionism who are calling for the most generous welfare package in the entire United Kingdom to be rejected are guilty of what they accuse the DUP and others of in regards to issues like gay marriage? If we followed their argument on other issues then not only would they reject the most generous welfare package in the United Kingdom, but they would call for parity with the rest of the Union and this would lead to an even harsher welfare system than that against which they are currently protesting alongside Sinn Fein, SDLP and the trade unions as part of a left wing anti austerity movement. This is a ludicrous position.

Welfare reform is not ideal. People will be worse off but it is a political and economic reality, there is no more money and a Conservative government that has come out of a coalition into a majority Government is not going to roll over and further increase the financial welfare package for Northern Ireland. I wish it would, but it won’t, and to think otherwise is nothing more than fantasy politics which are detached from reality.

It is time that those within Unionism – who for many years have so strongly championed the peace ‘process’ – finally accepted that it is they who have got it wrong. The DUP stood against the Belfast Agreement and hounded the UUP from office, before only a few short years later themselves propping up all the basic architecture of the very same agreement which they denounced as ‘treason and treachery’.

The UUP now sit in an Executive of an Assembly which they accept is not fit for purpose. The First Minister himself has stated that it is not fit for purpose, yet still they prop it up. This welfare debate has forced Sinn Fein into a cul de sac; it is time to be ruthless and to exploit that. Collapse the assembly and accept a return to direct rule and from that position negotiate a new agreement that rolls back the Belfast Agreement and provides for genuine and lasting peace, a peace that has a place for Ulster Protestants and that provides for real security of not only the Union, but also for the cultural identity of the PUL community.

Being opposed to the peace process is not being opposed to peace. Every right thinking person wants peace, but it has to be genuine and it has to be fair. The peace ‘process’ is not genuine and it is not fair. Perhaps the damage has already been done, but those within elected Unionism have a duty to our future generations to at least try and use any influence or leverage they have to roll back the agreements, which they agreed and they sustain, and which have guaranteed my generation of Ulster Protestants an uncertain future within a process that is appeasement at best and at worst a slow surrender. I fear it is the latter.

Social share:
Jamie Bryson Unionism Welfare welfare reform
Previous ArticleDoes the Irish rain make us all Irish? Brian John Spencer looking into his soul
Next Article Is it moral to recruit people already with blood on their hands and put them on the payroll of the state? – Asks Kyle Paisley