You are at:Home»News & Current Affairs»Opinion»Unionism – Craving to identify with a Scotland now looking in a different direction
Social share: 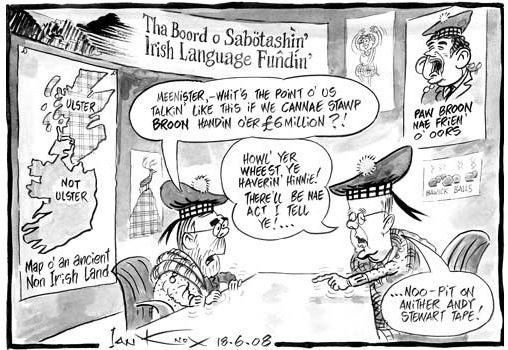 The DUP has launched its Westminster 2015 manifesto. A party unknown for vision has said it will push for a tunnel between Antrim and Scotland.

“A feasibility study into a tunnel or enclosed bridge across the North Channel from Larne to the Scottish coastline.”

This is quixotic. There is a clear asymmetry between the orange Irish and the Scottish.

‘Ulster-Scots’ is about the past, little about the present. That’s the differential, Ulster unionism has sought to root itself in that era of plantation and migration, Scotland (unionist and especially nationalist) has pushed deep into new and progressive political territory.

The Scottish Assembly overwhelmingly legislated for gay marriage. Scotland is in the throes of and has thrown itself behind the arch anti-unionist, Ms. Sturgeon, whose party could take 42 seats. YouGov has shown that Scotland is significantly to the left of England, to which this reviewer at the London Review of Books said the DUP is far to the right.

On the gulf between Ulster and British politics, and DUP isolationism, Owen Jones put it most forcefully: “The DUP is the political wing of the 17th Century.”

The DUP may wish to posture about the great and unbending link between Scotland and this “special” part of Ireland, but a basic knowledge of contemporary politics shows this ended a long time ago and anyone who says otherwise is telling you a fat lie.