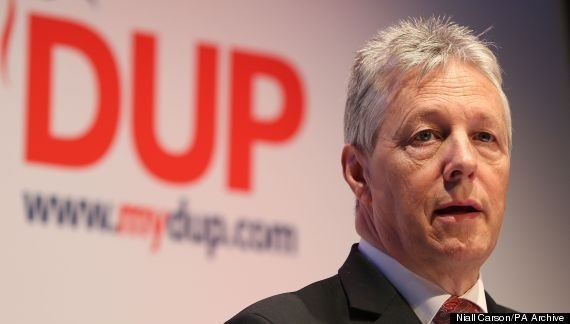 The problem now for DUP leader Peter Robinson is finding a Health Minister from within his own party ranks who would disagree with Jim Wells’s views on same sex marriage and children being reared by same sex parents and so on.

With the exception of Pam Cameron I am not aware of any other DUP MP or Assembly member disassociating him or herself from Mr Wells’s Downpatrick remarks.

Where has Arlene Foster been on what Mr Wells said? Some sources argue neither Miss Foster nor Simon Hamilton (former Ulster Unionists) would be comfortable with what Mr Wells has been saying. Why have they not stood up? Who in the DUP can be entrusted with these matters?

Regrettably we have an Executive in Northern Ireland where we don’t have a homogeneous position on anything. Whether one likes or dislikes David Cameron and his government one knows for what that Cabinet stands. We have failed to arrive at that position in Northern Ireland. For example what was the Stormont House Agreement all about? Do we know?

The fact remains the DUP lacks moral authority to speak on many issues. There is an intolerance at the heart of that party. That authority is absent at leadership level. Party leader Peter Robinson stood by Jim Wells in recent days nobly perhaps out of loyalty, but at what cost? Mr Wells has incurred the wrath of those at Westminster seeking to form the next government. Which party will rush to espouse DUP MPs if needed, with this issue being so hot right now? I have to caution myself however – power is a politically potent drug and it is hard to resist if votes are for sale.

I have already underscored the absence of moral authority at the top in the DUP. The party leader Peter Robinson rowing in behind Pastor James McConnell and his anti Muslim remarks robbed Mr Robinson of so much of that authority. His ambiguity about foreign nationals occupying homes in East Belfast further eroded his authority.

Am I surprised at Jim Wells’s stance on same same sex marriage? I know the man for for thirty years. He is black and white on all issues. He is consistent on matters like the GAA, the Irish language, religion, moral issues and indeed on environmental matters.

Peter Robinson knew this when he appointed Mr Wells Minister for Health. Jim Wells is not a Robinson ally. He was humiliated by the party leader, left blowing in the wind after being alerted about Ministerial elevation at the same time as Simon Hamilton. Simon took over from Sammy Wilson but Jim was left withering on the vine for over eighteen months before moving into the post.

Jim Wells is overtly socially hostile to Sinn Fein in the style of Nigel Dodds. Contact is strictly on a professional basis. You will not find Mr Wells laughing and joking with members of Sinn Fein. We should remember Ian Paisley’s demise was down to his closeness to Martin McGuinness.

Mr Well’s ultimate fall from office is down to conviction and intolerance. That is the heart beat of the Democratic Unionist Party and one should not underestimate the level of support in Unionism for views like those of Jim Wells.

Will this Wells débâcle impact on the elections in South Belfast, East Belfast or Upper Bann? The people will decide.