You are at:Home»News & Current Affairs»It’s not about sackcloth and ashes – By Brian Rowan
Social share:

Try to picture the scene.

On stage two former British soldiers sitting beside two men whose names will forever be identified with the IRA’s ‘war and peace’.

“There was no rancour, no squealing or shouting, no finger pointing,” Seanna Walsh said.

Across several prison terms, the Belfast republican served over 20 years in jail.

And, today, is remembered for the words he read to camera in 2005 declaring a formal end to the IRA’s armed campaign.

Recently, in London, he was joined on stage by Pat Magee, whose bomb was intended to wipe out Margaret Thatcher and her Cabinet during the Conservative Party Conference in Brighton in 1984.

The two republicans were invited to be part of a panel discussion and question-and-answer session at the annual conference of Veterans For Peace.

“I had nothing but thanks and good wishes for where we are today and hopes for the future,” Walsh told the eamonnmallie.com website.

“It was difficult enough at times, some of the questions, but the way it was framed, it was meant to be an engagement, not an argument.

“You had people there who had obviously been hurt by the conflict, people who had been damaged by the conflict and, people in the audience, who had lost loved ones,” he said.

They are part of a process, what have come to be called quiet or uncomfortable conversations.

And, this link, between former British soldiers under the umbrella of Veterans For Peace and former IRA prisoners has been developing in the background in recent times. 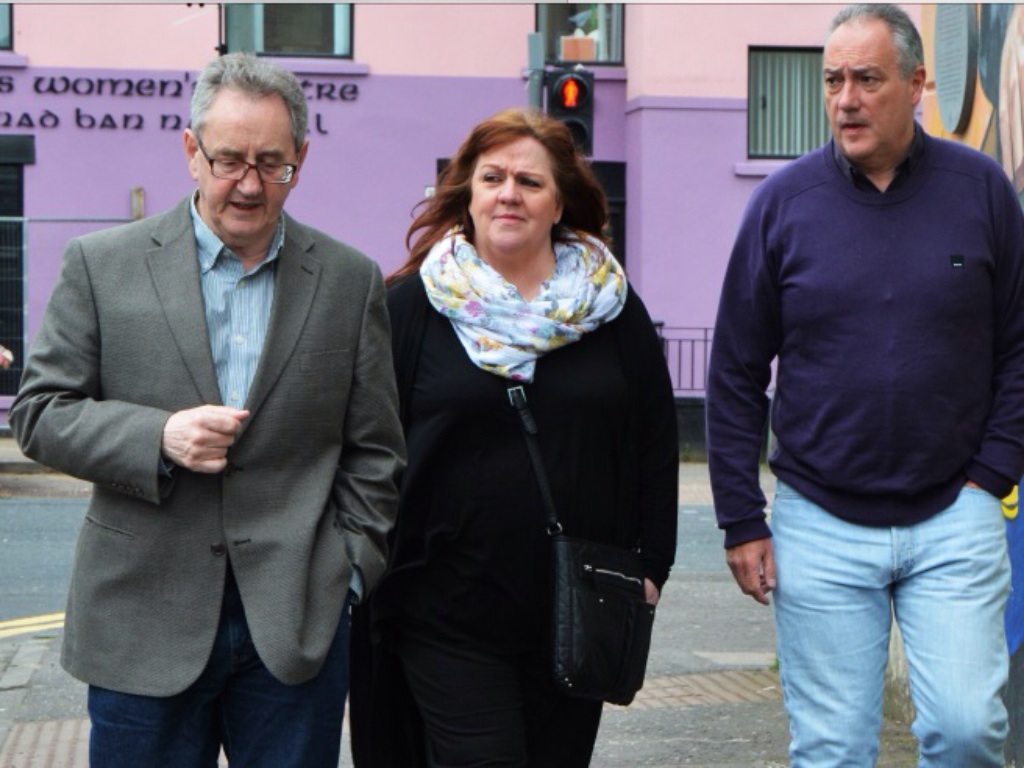 Eight veterans held a series of meetings here last year, a programme of events organised by Michael Culbert the director of the project Coiste na nlarchimi, which works on behalf of republican ex-prisoners.

“At one stage the enemy was the British. They’re now the opposition,” Culbert said.

“Our enemy was the British State. That is what has to be reconciled,” he added.

And the developing conversations and contacts are part of that process.

In the 1990s, pre-ceasefire and afterwards, Lee Lavis served on two tours in Northern Ireland with the 1st Battalion Staffordshire Regiment.

“The Army does things very black and white – enemy and good guy, and I was a good guy,” he said.

“I saw every single member of the nationalist community as my enemy.

“I saw them as being in the IRA, supporting the IRA or going to join the IRA,” he continued.

“I believed the line terrorists, psychopaths and criminals,” he said.

Lavis was part of the Veterans For Peace delegation that held that series of meetings with republicans last year, and also part of the recent panel discussion in London.

He has travelled a long distance in his thinking and his questioning;

A long way from cheering with fellow soldiers during a regimental briefing when shown video images of Michael Stone’s attack on mourners at an IRA funeral, to the type of dialogue he is now involved in.

In his own words, he became “the nail sticking out of the wood”.

One of his meetings last year was with a group of republican women including Eibhlin Glenholmes and Breige Brownlee.

“It was the most difficult meeting and the most fraught…very, very tense,” Lavis recalls.

Those in the room were from the different sides of the conflict, and today’s talking does not remove the many wounds of the past; how they hurt each other.

Brownlee remembers it beginning with “arms folded”, it being “very, very emotional” and, at times even “aggressive”.

But it was also “a most enlightening engagement”.

“You are better talking across the table, rather than anything going on under the table,” she said.

And, Lavis believes, however difficult, these conversations are essential.

“You could really see the power of this work to change pre-conceived ideas. You saw that being de-constructed through that meeting,” he said.

If these conversations were easy or cosy, they would change nothing. They have to be about asking and answering the difficult questions.

Veterans For Peace has a statement of purpose.

“We, having dutifully served our nation, do hereby affirm our greater responsibility to serve the cause of world peace,” it reads.

“To this end we will work, with others:

“Toward increasing public awareness of the costs of war;

“To restrain our government from intervening, overtly and covertly, in the internal affairs of other nations;

“To end the arms race and to reduce and eventually eliminate nuclear weapons;

“To seek justice for veterans and victims of war;

“To abolish war as an instrument of national policy.”

And the statement finishes: “To achieve these goals, members of Veterans For Peace pledge to use non-violent means and to maintain an organisation that is both democratic and open, with the understanding that all members are trusted to act in the best interests of the group for the larger purpose of world peace.”

Lavis says the dialogue with republicans is “not looking for sackcloth and ashes from us or them”.

Rather it is about achieving some better understanding of each other.

“I believe it stimulates further conversations,” he said.

“It breaks down barriers, removing that reduced view we have of each other,” he continued.

And he believes the contacts also deliver “the symbolic importance of former combatants talking”.

“For the British soldiers it gives them closure on a part of their life that was traumatic,” he said.

“This process, for us, removes the balaclavas and, for them, it removes our helmets and camouflage cream.

“It humanises everything,” he said.

And, so, the talking arrived on that stage in London.

“The British soldiers there explained why they joined the Army,” Seanna Walsh said.

“And Pat [Magee] and myself were talking about the circumstances that gave rise to us going out to resist the British Army on our streets.”

Recently, in Belfast, deputy first minister Martin McGuinness urged further “uncomfortable conversations” towards reconciliation, and Walsh sees this dialogue with Veterans For Peace in that frame.

“It’s about binding the wounds of war, attempting to re-build a society and a future for our children that is different from the lives of conflict and prison that we lived,” he said

“We are in every story, but we are the extras,” he said.

This summer Veterans For Peace will have an event in Feile an Phobail; another small but significant step forward.

And for Breige Brownlee, this continuing dialogue is about “breaking down suspicions…breaking down the barriers”.

“Conversations have to be taken out of the corners and out of the rooms,” she said.

Before the engagement with Veterans For Peace, Michael Culbert brought two soldiers, who are not part of that group, to meet with families in Ballymurphy.

In his words, it gave him “a seed of thought” out of which this new dialogue has emerged.

And why is it important?

Because not long ago this type of interaction would have been considered unthinkable.

Social share:
Previous ArticleThe DUP’s Haystack
Next Article Will policing accountability end up hostage to political and security veto in Republic of Ireland? By Ciarán Kearney