You are at:Home»News & Current Affairs»Is the IRA really beyond answering? – Brian Rowan on the Cahill case and the Adams Blog
Social share: 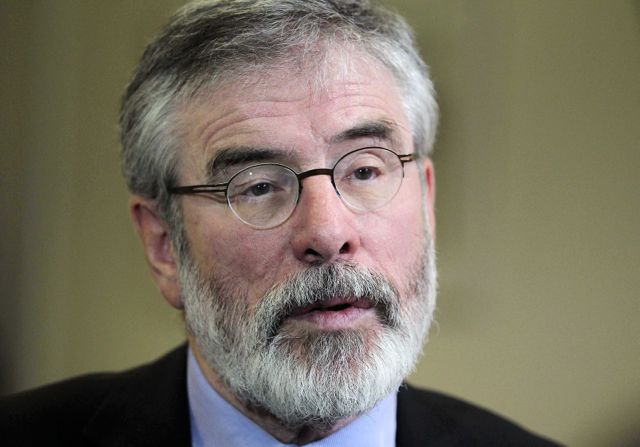 A line jumped out at me as I read through a Blog written by Gerry Adams just a few days ago.

In it, the Sinn Fein President was responding to interviews given by Mairia Cahill, the grandniece of the late Joe Cahill, a senior IRA figure whose name reads back through the many decades of conflict here.

It includes an allegation that she was raped by a suspected IRA member when she was a teenager in 1997.

And that the IRA conducted an investigation and forced her to confront her alleged attacker.

The man she accused of rape was later acquitted of criminal charges in court, and charges were dropped against those allegedly involved in the IRA investigation.

But after the Spotlight film, Sinn Fein faces more questions about the role of the IRA in investigations and justice and alleged cover-up.

And in his Blog on Sunday Adams wrote the following:

“Following the IRA cessation in 1994 and the developing peace process, legacy cases of abuse emerged.

“Many of these are in the public domain. Some involved republicans. My father was an abuser. Some also may have involved IRA volunteers. Those who wish to have these cases dealt with have that right.

“The recent publicity surrounding the case of Mairia Cahill has brought this particular issue to the fore in public consciousness,” Adams continued.

“Mairia alleges she was raped and that the IRA conducted an investigation into this.

“The IRA has long since left the scene so there is no corporate way of verifying this, but it must be pointed out that this allegation was subject to a police investigation, charges were brought against some republicans who strenuously denied Mairia’s allegations.

“They insist they tried to help her. They were all acquitted by the court.

“Mairia has also accused Sinn Fein and me of engaging in a cover-up. That is untrue,” Adams wrote.

What jumped out at me was the line that the IRA had long left the scene and that there is “no corporate way of verifying” if an investigation had been conducted.

Am I reading that line correctly?

Is that what Adams meant?

That the IRA and its corporate knowledge disappeared in some wave of a magic wand and an order given in 2005?

Is that meant to be a credible explanation?

And what does “no corporate way of verifying” mean in relation to the wider questions of the past – not just on alleged abuse cases dealt with by the IRA but the bombs and the bullets?

Does it mean that the IRA no longer has to answer in a way that is still expected of others?

Those words “no corporate way of verifying” need to be clarified in relation not just to the Mairia Cahill case but  the many other cases that were part of a bloody and violent past.

A process on the past is pointless if there is “no corporate way of verifying”.

And a process on the past will go nowhere if people can’t remember that they were in the IRA and what investigations were or weren’t conducted by that organisation.

On the past, the IRA still has to speak and answer for itself if those are the rules expected of others.

There can be no hiding behind a sentence or a position that the IRA has now gone away.

Today (Tuesday) Mairia Cahill tweeted that she welcomed the announcement by the Public Prosecution Service that the handling of her court cases is to be independently reviewed.

And that announcement was also welcomed by Sinn Fein.

But with the Executive parties due to discuss the past in all-party talks on Thursday, that line in the Adams Blog should also be considered.

What is meant by “no corporate way of verifying”?

Social share:
Previous Article“Was it the bark of a plucky underdog who, in the end didn’t have the bite?” Brian Spencer spent this week sniffing around Scottish voters…
Next Article Stormont: it is a theatre of politically spun shameful and divisive failings – By Terry Wright.