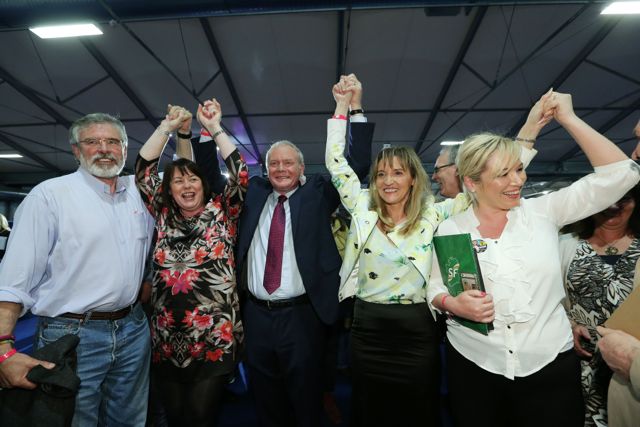 “You’re playing senior hurling now lads” the late Seamus Brenann said to Green party TDs as they entered government for the first time in 2007 with Fianna Fáil. This statement is now equally true of Sinn Fein as they celebrate increasing success both North and South of the border emerging with 4 MEPs and over 250 councillors across the island of Ireland. The rise of Sinn Fein has serious consequences for the more established parties in the Dail but also for the future direction of the Executive as they aim to implement further cuts and contentious issues like welfare reform.

The emergence of Sinn Fein as a major political force has been years in the making as the party’s main competition on the left, Labour began to see dramatic falls in its support following its entry into government with Fine Gael in March 2011. Sinn Fein has successfully positioned itself as the leaders of the opposition to the austerity that has been implemented by the last two governments since 2008. The increasing weariness of the Irish electorate has now manifested itself in a strong rise in Sinn Fein’s support. Once the pariah of Irish politics, they have now grown to such an extent that they will in all likelihood become the third largest party at the next general election.

However, Sinn Fein needs to guard against Wilde’s famous quote that ‘when the gods wish to punish us, they answer our prayers.’  Should the party win twenty plus seats at the next election, there will be a great deal more scrutiny on the feasibility of their economic policies. Moreover, should they end up in the position of kingmakers within the next Dáil, they will have to enter a coalition with either Fianna Fáil or Fine Gael, at a time when money and opportunities for new social programmes are scarce. Like Labour in 2011, the party’s support is now anchored to one of the most electorally volatile constituencies in the country, who while they quickly flocked to the party two weeks ago, will quite easily turn away from them if they are seen to be backtracking on their promises to end the cuts and implement a more left wing agenda.

There too are problems for the party when it comes to governing in Northern Ireland. As we face more difficult choices over welfare reform and how we re-structure our own dependence on the public sector, it will be increasingly difficult for the party to agree to difficult cuts in public expenditure which it has up until recently been able to agree to. This will place added strain on relationships with the DUP and could see further destabilisation of the Executive.

Yet, putting off welfare reform and blaming the British government for cuts will only get Sinn Fein so far. Austerity is being implemented by governments both left and right across Europe; the promise of a better way to balance the books has been made by left wing parties in countries like France and Greece in opposition; only to find when  they actually get into government that things just are not that simple.

The rise of Sinn Fein matters for all of us on this island and they should not be taken for granted. For people who oppose them, it would the foolish to simply dismiss them as irrelevant or not recognise their success. Likewise, the party supporters should not kid themselves that it is all plain sailing ahead; issues like welfare reform, budget deficits and cuts are not going away anytime soon. The voters, who brought Sinn Fein to the dance in the South, could very easily abandon the party, if they enter government in the near future.

Dr.David McCann, holds a PhD from the University of Ulster in North-South relations.