You are at:Home»News & Current Affairs»Opinion»Unionism and modernity – by Colm Dore
Social share: 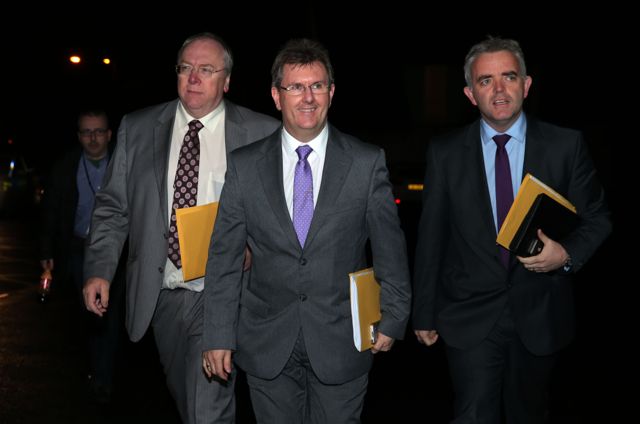 Unionism was founded on, and remains dominated by, fear of the Other, inextricably linked with regard of the Other as inferior. That is incompatible with modern discourse, and, by ‘modern’, I largely mean Enlightenment ideas, hardly cutting edge stuff.

‘Triangulation’ was the term used to describe Bill Clinton putting the GOP on a reactionary back-foot by his repositioning. It is the effect that Sinn Fein’s mere presence in democratic politics has on Unionism. Hence Jim Molyneaux’s fear that the IRA ceasefire was destabilising. It revealed Unionism’s true opponent; not Sinn Fein, but having to deal with nationalists as equals, i.e. modernity.

‘Pastor-gate’ was a side-bar in this difficulty with modernity in substance and tone. Northern Ireland’s main party of government has had problems with homophobia (Sammy Wilson, in Jim Davidson mode, called homosexuals “poofs”) and misogyny (e.g. toward the Women’s Coalition). The party’s disproportionate number of Creationists is, relatively, benign.

The fear manifests in the constant wariness for Lundys, making leadership nigh impossible for fear of being outflanked by traditional voices. Hence un-elected Orangeman Mervyn Gibson’s inclusion in the DUP Haas-talks team, and the need, at those negotiations, to brief Jamie Bryson and Willie Frazer.

It results in incredible (in both senses of that word) double standards: Unionist Exceptionalism, which is logical given the pre-modern sense of superiority to the Other. Why be subject to the same rules? Hence the à la carte attitude to the rule of law e.g. on parades, and toleration of sectarian songs, bonfires, and sectarian use of flags to claim territory. Camp Twaddell is allowed to illegally squat on Housing Executive land, while the Minister responsible, Nelson McCausland, shares the platform, applauding antediluvian rants. Hence the black-and-white Troubles narrative of IRA sole responsibility in denial of Unionist and state wrong-doing (viz. Gregory Campbell’s bitter contortions in TV interviews on the day of Cameron’s Bloody Sunday apology).

Hence exemption from even the basic civility of shaking hands with government partners. It’s not principled, as there are no such qualms about loyalist terrorists. Our First Minister was photographed shaking hands with UDA brigadier Jackie McDonald in Stormont in January 2013, yet, even now, he still won’t shake hands with the Deputy First Minister. That’s difficult to sustain in the modern world; a refusal to dignify people’s humanity as equals. This is no small thing – it goes to the essence of our problem. It reveals a shocking lack of evolution from the Plantation view of the ‘wood-kern’, or the ‘Punch’ magazine caricature of nationalists, unfit for Home Rule, necessitating Partition.

It has dangerous consequences. To borrow an economic phrase, there is a ‘trickle-down effect’, facilitating dehumanising sectarianism on the street, as enacted by the mob who attacked Mayor Máirtín Ó Muilleoir at Woodvale Park, in contrast to the respectful warm reception of loyalists like McDonald himself at Féile an Phobail on the Falls Road. Likewise, it validates the refusal of loyalist marchers to speak to local residents: no need to treat them as equals if your tradition is to march where you want. Ian Paisley’s preparedness to have personal interaction with the Deputy First Minister, not the cold ‘business-like’ reductivism of which the DUP now boast, was one of principle reasons they turned against him.

There are endless examples of Unionist double-standards on Loyalist terrorism. The UWC strike, opposition to banning the UDA, Hugh Smyth’s selection as Mayor when Sinn Fein were verboten, Willie McCrea’s relationship with Billy Wright, Trimble’s UUP entering the Good Friday talks flanked by UDA and UVF representatives in a calculatedly striking tableau. Peter Robinson and Sammy Wilson carried the coffin of UDA boss Ray Smallwoods (for some reason that receives somewhat less attention than similar).

Unionist Exceptionalism, superiority, necessitates exclusivity and separatism. The old term ‘Protestant ascendancy’ is just too nakedly pre-modern, so separatism is expressed by the term ‘the PUL (Protestant-Unionist-Loyalist)’, still, by definition, excluding Catholics. It is the pre-modern definition of political identity as ethnicity. Conversely, republicanism is a modern ideology, flowing from inclusive Enlightenment ideals like citizenship. Necessary apartness is justified with quotation of 2 Corinthians 6:17, ‘come out from among them, and be ye separate, saith the Lord, and touch not the unclean thing; and I will receive you.’

Attempts to appropriate modern ‘rights’ language for PUL ascendancy backfire. A recent example, on the Nolan TV show  (4/6/14), was DUP MLA William Humphrey arguing the baldly contradictory position that it is ‘a human right’ for Orangemen to march past Ardoyne but that a republican parade on the same route would be wrong.

Tonally, Unionism, predicated on confrontation, is given to hysteria: the hyperbolic ‘ripping down’ language of the December 2012 flag leaflet, ‘culture war’, and Robinson’s ‘steam coming out my ears’ re: Haas. This been normalised, warping our discourse, as so often we hear of ‘Unionist fury’ as ‘Unionists have reacted angrily’ to proposals. We don’t often hear of ‘nationalist fury’.

Unionism’s anachronistic confrontational anger jars with the conversational dynamic of television now, giving us apoplectic audience contributions, and panellists whose countenances often exude their arrogant disdain – being, in Yeats’s words, ‘an image of such politics’.

Modern technology, in a proliferation of social media and cameras, increasingly exposes the inexcusable excesses of Twaddell-type protest, and the occasional lapse into murder-fantasy, to say nothing of the incompatibility of tyre pyres with modernity.