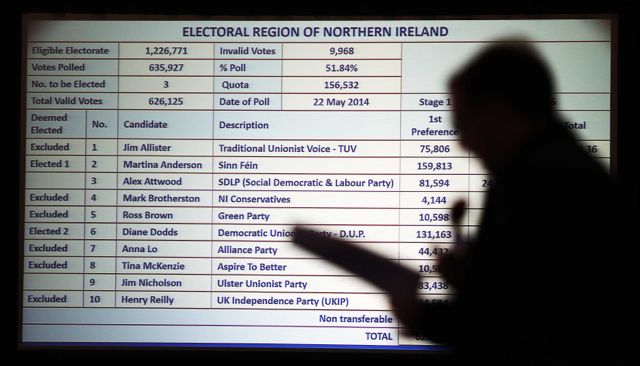 After the local and European elections, is Northern Ireland any better off?

Nearly 50% of the electorate who opted out of the process probably feel that the answer is no.

The turbulent nature of the days since the declaration of the results seems unlikely to render their view unfounded. Bomb scares, a firebomb thrown into a hotel, the abandonment of a costly educational initiative, continuing strain within the Stormont Executive and the ill-advised, highly-publicised and insensitive words of the First Minister Peter Robinson revealing an unacceptable prejudice towards a particular religious group, some of whom work with great distinction within Northern Ireland, do little to raise levels of optimism. It would have been decent to feel some shame.

Without exception each of the bigger and longer established parties has attempted to put its results in the best possible light. Percentages or numbers are deployed as required. Comparisons are drawn with historical data where they are likely to compare favourably.

In fairness to Mike Nesbitt MLA leader of the UUP, the party seemed to draw lessons from past operational errors with regard to early selection, mixed messages, party division and choice and presentation of candidates. A Report written for the then party leader, now Lord Empey in 2010 drew attention to these and other issues.

MLAs like Jo-Anne Dobson, Michael Copeland and others have worked their constituencies to lay a foundation for progress. They have gained credibility on concerns like Organ Donation and Welfare reform.

The leader himself has scored some hits from his position as Chair of the OFMDFM Committee and moved the party to the right on a number of issues like the MAZE, Victims, Haas and OTRs. He appears to be shifting the party back to more traditional politics to attract errant voters loaned to the DUP. One suspects the thinking is not his alone.

The UUP has been less damaged than the DUP over educational under-achievement and flags.

Having said this the almost irrational exuberance demonstrated over the small percentage increase achieved in the new Council elections suggests that the results were better than anticipated and the electoral performance of Jim Nicholson MEP was disappointing and must have created alarm.

Sinn Fein has much more to be satisfied about than an SDLP now weaker than before and in need of re-invigoration and fresh ideas. Anecdotal evidence of factions and differing agendas at a local level suggest a party ill at ease with itself.

Sinn Fein has hit a plateau in Northern Ireland and further success if it comes is likely to be in the Republic of Ireland. But, the party has had good results and will continue to do what Sinn Fein does.

It now has considerable expertise at remorseless manipulation with only the occasional display of its bitterness. When this is on show, the deep feelings of being oppressed and how these can distort judgement to produce ruthless and closed thinking is all too apparent.

The DUP is now in the position once held by the UUP following the Belfast Agreement. Having entered government and following agreements at St Andrews and Hillsborough it has to work with Sinn Fein.

The difficulties and political poverty of the static and strained relationships skew and contaminate government and frustrate hopes for progress and normality. Each of the largest parties, content to appeal to one constituency operates from a premise of damage control. Politics of the fixed point and opportunistic point scoring produces a combustible mix of wearying mediocrity, alongside an inability to deliver endurable results.

Departure from this causes challenge and discomfort so it is avoided. Government of the autocratic tribal bloc is informed by trade-off and ways to avoid compromise. With 1916 commemorations and elections approaching the situation will not improve. When reason, principle and ethics are compromised you become a mob and for a mob, there is only one law – MINE. The bigotry may become more septic.

It was not supposed to be like this following the referendum of 1998. If this cascades to the new Councils, waste and stalemate will continue. The lifeboat is at risk of becoming the source of the storm.

The irony is that each side breeds the success of those it considers its political opponent. However, evidence suggests they do so with limited appeal.

The unionist and nationalist blocs are diminishing in number and the parties merely compete for a larger proportion of constituencies that are decreasing over time. Attitudinal and generational change currently expressed through the disenfranchisement of nearly 50% of the electorate is occurring. In some areas the figures show a democratic deficit of more than 50%.

Voters have opted out for a variety of reasons but it is indisputable that the largest proportion is disenchanted with politics and politicians. The experience of devolution is that the process sacrifices time and energy on entanglements and bickering. Due to the behaviour and competing agendas of the various participants the basic architecture is now seen as flawed in design, poorly tested and ultimately not functional.

Structures are slaves to those who inhabit and work them but there can be little argument that politics in Northern Ireland, especially within the Assembly are in need of re-boot. The reset button needs to be pushed otherwise the democratic deficit will grow and any mandate which the politicians claim will be discredited. We are already beyond the point for review.

It is not that Northern Ireland is ungovernable. It is that participative democracy and governance through exercise of the franchise is problematic. The claim is justifiably made that this is a trend elsewhere but Northern Ireland can ill afford to be involved in a race to the bottom.

Those who are tired of old politics have as yet no way of expressing this in party political terms. New parties have not made a breakthrough as they compete for the same constituency. Policies, strategies and leadership are not sufficiently developed. If they are to attract voters from all persuasions who have opted out or in some cases failed to register the task is clear.

There is an impetus building for change and better politics.

Many who have not voted want to see leaders working together to identify specific challenges and then commit to finding solutions. At community level networks exist and work creatively to overcome challenges.

Perhaps it is the large numbers who have opted out for the moment who will ultimately prove most effective in digging the foundations for the future.