You are at:Home»News & Current Affairs»Opinion»“They ask what hate is – It’s just the other side of love” (Van Morrison) – Seán Byers on religion
Social share: 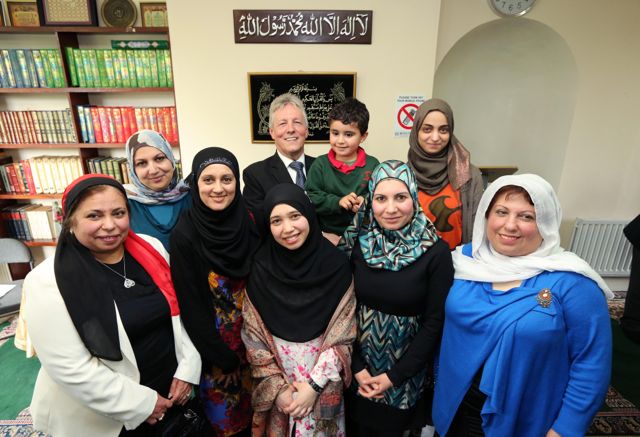 Events of the past few weeks serve as a reminder that, for all their humanising potential, religious institutions and their representatives have too often allied with the powerful in the name of reactionary causes. Quite righty, the support given to Pastor James McConnell by Peter Robinson and DUP politicians linked to the Caleb Foundation – ‘Ulster’s answer to the Taliban’, in the words of the late Billy Mitchell – has drawn the opprobrium of progressives from all backgrounds, culminating in a well attended anti-racism rally at Belfast City Hall. As noted by Brian Spencer, and illustrated most clearly by Jamie Bryson’s response to his latest post, prominent members of Northern Ireland’s largest political party are among the staunchest opponents of British secularism, multiculturalism and modernisation. Opposition to equal marriage and women’s rights; climate change denial; a fixation with creationist theory; an enthusiasm for keeping the Sabbath strictly holy, thus preventing the citizens of Northern Ireland from engaging in sporting and cultural activities – these are the hallmarks of politicians that share very little in common with their counterparts across the water. Rather than transforming into a microcosm of British society, they have worked hard to ensure that the North remains very much a place apart. That DUP ministers appear to possess teflon-like qualities is reflective of this dire state of affairs.

Across the border, yet another scandal involving the Catholic Church has unfolded. The work of historian Catherine Corless has revealed that in Tuam, Co. Galway the remains of almost 800 children were left in a mass grave, a disused septic tank in the grounds of an institution run by the Bon Secours nuns between 1926 and 1961. Not only were members of the clergy involved in organising the burial of two-day-old children in shit (just let the horror of this sink in), but Catholic Ireland and its politicians ignored the appeals of those who attempted to bring this to light (see here and here). Following the revelations surrounding child abuse, the Magdalene laundries and Ireland’s banished babies, to cite but a few notorious examples, this recent scandal has compounded the Church’s difficulties and arguably hastened the erosion of its moral authority. The rapid decline of the Irish population’s identification with the Catholic faith is one manifestation of this. Victims of clerical abuse and their families would be entitled to find it particularly galling that the Church has recently attempted to reassert this authority by instructing its faithful not to vote for parties that depart with Catholic teaching on abortion and gay marriage (Sinn Féin). Of course, it is symptomatic of the situation we find ourselves in that this had the DUP’s Diane Dodds and TUV’s Jim Allister falling over themselves to defend Bishop Noel Treanor’s right to intervene in political matters. Separation of church and state? Not on their watch.

John Tosh has written that, ‘If society looks to historians for “answers” in the sense of firm prediction and unequivocal generalizations, it will be disappointed.’ Yet, following Tosh, history does offer something by way of precedents, diagnoses and tentative prescriptions. Historians such as Diarmaid Ferriter have documented how successive Irish governments abrogated responsibility for education to the Catholic Church, while deferring to the bishops for guidance on social and economic policy, culture and justice. Instructing its faithful on the morality of dancing and using ‘red scare’ tactics to incite attacks on suspected communists, the Catholic hierarchy regularly exercised monopolistic power in order to obstruct progress. Archbishop John Charles McQuaid played a key role in designing Bunreacht na hÉireann (the Irish Constitution) and used his influence to end the political career of Dr Noel Browne over the Mother and Child Scheme, which proposed to provide free maternity care for all mothers and children. This shameful episode in Ireland’s history is detailed in John Horgan’s excellent biography of Browne. Throughout the twentieth century the senior clergy was, in the words of one contemporary Irish labour activist, ‘preoccupied with two things: communism and wanking’.

The germane point is that history has not been kind to puritanical zealots like McQuaid or the extreme forms of doctrinaire nationalism inspired by those of his ilk. The historical record is clear, for example, on Irish Catholic Bishops’ support for Franco and the fascistic Blueshirts at a time when ‘Jewish-Masonic-Marxists’ were the preferred scapegoats for scarcity and economic depression. Catholic politicians and sections of the clergy were complicit in the rise of Mussolini and Hitler, while the murderous Ustasha regime of Ante Pavelic enjoyed the blessing and protection of the Catholic Church in Croatia. The sterling work of Catholic charities notwithstanding, there is no escaping these historical realities.

Eamonn Mallie’s two-part interview with Ian Paisley is another case in point. Challenged on his role in Northern Ireland’s bloody past, Paisley attempts to distance himself from offensive remarks about the Catholic minority and the Old Testament fire and brimstone speeches he delivered with the effect of encouraging impressionable working class youths to take up arms. But despite his revisionist efforts to evade responsibility for his part in the conflict, Paisley’s words and deeds are recorded in original documentary sources, political biographies and general histories of the Troubles. The Big Man will be remembered as a dangerous, sectarian rabble-rouser, not as a peacemaker or statesman.

To return to the issue at hand, we have been witness to the poisonous effects of right-wing politics infused with religious fundamentalism. It is an indictment of us all that preachers such as Pastor McConnell and Rev Ian Brown continue to wield such influence. Without making firm predictions, it is likely that posterity will not judge these individuals or their supporters kindly. This applies to Paisley’s erstwhile comrades in the DUP. Of course, this will come as little consolation to Anna Lo, Muhammad Asif Khattak and all those who have suffered at the hands of bigots in recent weeks and months. However, this is where we can draw on the vast resource of history for a tentative prescription.

Writing on the rise of the far right in 1932, Leon Trotsky warned prophetically that it would not be sufficient to appease, ignore or flee from the dangerous forces gaining strength: ‘Worker-Communists, you are hundreds of thousands, millions; you cannot leave for anyplace; there are not enough passports for you. Should fascism come to power, it will ride over your skulls and spines like a terrific tank. Your salvation lies in merciless struggle.’ Thus the only remedy for racism and fascism in our era is that we – the ‘hundreds and thousands, millions’ – present a united front and face down those responsible for inciting racial hatred and carrying out racially motivated acts of violence, locally and internationally. The attendance of 4,000 people from all shades of progressive opinion at Saturday’s anti-racism rally was a good start. But it is important that this momentum is carried into next Saturday’s (7 June) Unite Against Racism march and beyond. If we fulfil our generational duty, history will eventually do its job.

Seán Byers received his PhD from the University of Ulster in 2012. His research interests include Irish labour, republican and international socialist history and politics. Presently, he is conducting research on the role of Republican Youth in post-conflict Northern Ireland and is writing a political biography of Seán Murray (1898-1961), the prominent Irish republican and communist. Connal Parr has completed a PhD on Protestant working class politics and culture at Queen's University Belfast. He serves on the board of the Etcetera theatre group and has published articles in the News Letter, Dublin Review of Books and the detail.