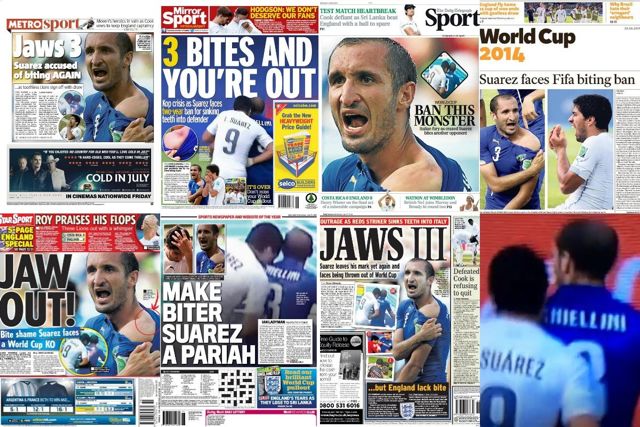 Biting somebody is not just a footballing offence. Biting somebody is a criminal offence. Had Luis Suárez chomped on someone on the street he would be liable for assault, (had he broken skin, caused bleeding or left a mark). Assault occasioning actual bodily harm to be precise, under section 47 of Offences Against the Person Act 1861. This offence is relevant to the Crown court. Any injury that is more than ‘transient or trifling’ can be classified as actual bodily harm. A person guilty of ABH is liable to imprisonment for a term not exceeding five years

However a charge of common assault – a summary offence under section 42 of the 1861 Act – would be more likely and would be heard without a jury in a magistrate’s court. Under common assault, a person convicted is liable to imprisonment for a term not exceeding one year.

Yet as Jack Anderson of Queen’s University Belfast said, “Law enforcement authorities tend to leave these matters to the sporting body”. Why? Generally because “sports specific sanctions tend to have a greater and more immediate impact on the player.”  He also explained that, “they are also easier, quicker and less expensive to convene, as opposed to a prosecution.”

Jack Anderson also said, “This was the view taken in England after Suárez’s last biting incident. It is likely that FIFA will come down hard on him. He has had previous incidents, there is clear physical and visual evidence and he has brought an otherwise fantastic tournament, and the sport, into ‘disrepute’.”