You are at:Home»News & Current Affairs»Unionists “malnourished from the chronic poverty of leadership” – by Brian John Spencer
Social share: 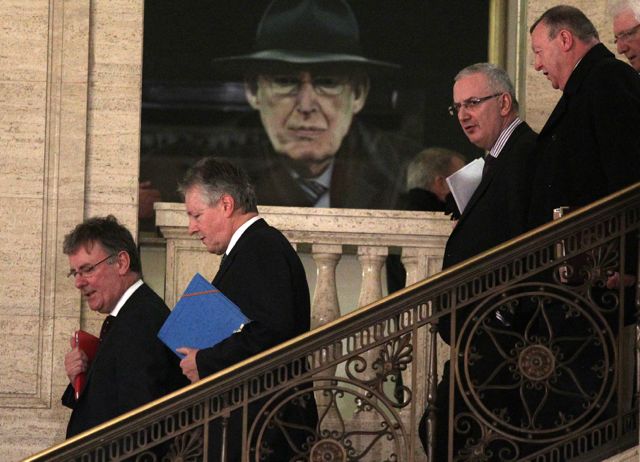 The re-plumbing of logic and straw man beating in the wake of Pastorgate has been an awesome sight.

The media got their apology from Peter Robinson. Given frugally and heartily qualified. “I apologise to these gentlemen if anything I have said may upset them or hurt them.”

People are racially attacked and Anna Lo is abused and Peter Robinson counter-claims that he had been a victim of hate. How pathetic. The straw man of inverted logic, sham analogy, duplicity and audacity pulses like an open nerve.

Peter Robinson has been at the centre of frontline, partisan and aggressive politics for over 40 years. A man in highest political office and a leading figure in a party that has courted dissent and rabble-rousers.

But it’s more than that. Clegg, Cameron, Miliband and Farage have all been attacked, hated and given protection and bullet proof cars. Why? Because they are major policy and political figureheads, holders of portfolios of major implication. Anna Lo, a minor politician, is hated for her race and expressing an opinion of no policy import.

This sort of outlandish comment simply cannot be allowed to stand. It’s an open insult to the intellect and integrity of the people and the process.

It’s the same with the press. How many times have we heard Peter Robinson chastise the press with his inverted logic.

He wants a soft and cuddly, neutral and neutered media. One that praises, not punishes. The inverted logic is bizarre. The press isn’t supposed to say nice things about the government and politicians – That’s called public relations.

The press is supposed to be rough, rude and raucous. That’s what keep’s government and society honest. In Northern Ireland, without a formal opposition, we need a roaring press more than anywhere else.

Peter Robinson sets up these false premises and absurd analogies, on hate attacks and the press, and then bashes them down. The inverted logic needs corrected and he held to account.

His deficit in logic sustains his deficit in leadership and deficit in normal activity further down the hierarchy. The inverted logic that racist hate was somehow natural, came in concert with other voices that sought to excuse the Anna Lo abuse with sham arguments.

Henry Reilly said racist attacks against Anna Lo were a natural effect of her offensive comments when she called people of Northern Ireland “colonials”. Of course she didn’t actually say that, but said she was “anti-colonial”.

DUP advisor Austin Finn called Anna Lo xenophobic and took immense offence at her call for religion to stay out of politics. Separation of church and state may be new to Austin, but it’s an elementary point in civics.

Then there was other creepy rumblings in support of the Pastor from within DUP. Including word from James McConnell that our health minister Edwin Poots had lent him his full support.

Online Anna Lo was subjected to a campaign of abusive comments (like those by Dineen Walker) and portrayed as some sort sinister and malevolent republican uber-agent. This cannot be allowed and must be repudiated.

Here lies the issue. If we get inverted logic from Robinson at the top as he pooh poohs the most grievous and malignant racist abuse, party faithful and bleaters on the street with take license and encouragement from Robinson and other seniors.

We need clear-eyed logic and an end to these cheap and pathetic sham analogies. With this we need a full throated apology on the race issue. One without equivocation, prevarication or qualification. Robinson gave one of sorts – ill-tempered and covetous. So we can expect nothing more. Then we need a full apology through action and material change and this must be started with the implementation of a collective community strategy.

What is also remarkable. We got an apology outside the Islamic centre. Wrenched out like a limpet. Peter Robinson at his cantankerous, crabbed and irritable best.

And he’s lucky. As Cathy Gormley-Heenan said, “If it had been in any other jurisdiction across these islands I imagine the First Minister or Prime Minister or Enda Kenny as the Taoiseach would have had to resign.”

Compare this to McGuinness, kicking it with the kids, tweeting like your mate and high fiving and back slapping like Obama. “McGuinness moon-walks on it.”

Unionists are better than what we’ve just seen. They deserve smarter unionism. They are malnourished from the chronic poverty of leadership. They need rescued from this political orphaning that puts orangemen, bandsmen, gunmen, Bible-bashers, flag-flyers, bonfire-builders over ordinary people.

As Alex Kane has said, even though polls show considerable support for maintaining the Union, this doesn’t convert into votes. There’s simply no comfortable home for moderate protestant unionism, never mind Catholic unionism.