You are at:Home»News & Current Affairs»Opinion»‘Pastorgate’ – a time for sense – by Jane de Courcey
Social share: 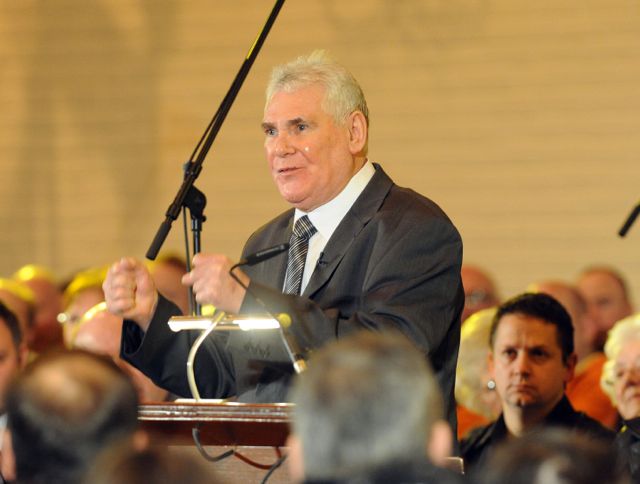 These have been torrid times for Unionism and Loyalism – vilified around the world and mocked by observers for “our” shameful attitude towards Muslims.

Pastor McConnell wielded the shovel and a slew of politicians, most notably Peter Robinson, fell into the hole. Commentators calumnified “hate-filled” Unionists who subscribed to the belief that Islam is the creed of the Devil.

We have been derided and laughed at, labelled as knuckle-dragging Neanderthals and even been told off by the increasingly ridiculous George Galloway, a comedy figure MP who famously once appeared on TV pretending to be a cat lapping milk.

Mind you, it hasn’t been edifying: the First Minister’s attempts at retracting his initial backing for the Pastor have looked clumsy and insincere.

But, of course, all Unionists and Loyalists are tarred with the same presumptive brush. Republicans and others have been quick to seize the moral high ground and look down at the PUL community with pleasure, ill-disguised as contempt.

Blame for the initial sleight to Muslims has now been attached to us all and we are paying a high price for his ill-judged comments.

At a time when calmer voices and quiet reflection should be encouraged, certain media personalities have turned up the heat and done their best to keep the pot boiling. The shrieking banshee that is Stephen Nolan has helped build a domestic crisis into an international incident.

So let’s get a few things straight. I’m Protestant, proudly Unionist, and I don’t hate Muslims. I don’t think their religion is “spawned in Hell”. I don’t “not trust them” and I’d be happy to let them do a lot more than just “go down to the shops for me”.

I hope that my view is representative of the majority of my co-religionists: in fact, I’m sure it is.

But there are undoubtedly some who do believe that Muslims are a threat to our society. It may be useful to examine why they think in that way.

The first reason, perhaps, is that we are still a society coming – as yet unsuccessfully – to terms with our past. As Protestants and Catholics, we couldn’t live together during the Troubles and we’re not finding it easy yet. Trust-building is no cakewalk.

Isn’t it said that Belfast has more peacelines now than it did when the Agreement was signed? We’re inching forward, but we’re not exactly getting along famously.

Age-old divisions are huge factors, but throw in another – ie immigration – and a very shaky status quo quickly becomes unstable.

If we struggle to get along with each other, of course we’re going to struggle to accommodate societal change on a fairly major scale. Those who’ve had little or no contact with the “other side”  find this an uncomfortable adjustment and a repulsive but thankfully a tiny minority have decided to take matters into their own shameful hands.

But another aspect demands interrogation, and that is how Islam is portrayed and perceived.

When a Danish newspaper published a few tame (and unfunny) cartoons of Mohammed, it sparked bloody riots in many countries, leading to numerous deaths. Yet when 250 schoolgirls were kidnapped by Islamic militants in Nigeria, there were no riots, only the tear-stained faces of anguished parents fearing they might never see their daughters again.

Neither are we shown mass protests at the deaths by stoning of those women who’ve committed adultery in Muslim lands, nor peaceful vigils to highlight the impending executions of “apostates”.

There is a disconnect: either, there are no objections, or the media simply does not tell us about them. Were the tenets of the Bible fully implemented, Christianity would still be a bloodstained faith. Thankfully, most of us have moved on.

The same goes for Sharia law, but there is justifiable concern that in places it is still being imposed with medieval barbarity. This is what creates the frisson of doubt that may lead some to tar all Muslims with the same brush that is now painting our “intolerant” selves.

The media has shamelessly stoked the flames of “Pastorgate”, while neglecting a wider responsibility. Is it the case that moderate Muslims do not protest at atrocities carried out in the name of their faith, or is it that the media chooses not to show the progressive face of Islam?

There is something inherently wrong about characterising an entire religion on the basis of what some of its adherents do. But knowledge and understanding are the only ways to build bridges over the rivers of ignorance which have flowed so freely of late.

And the media must play its part in building those bridges.