You are at:Home»News & Current Affairs»Opinion»Loading the dice against state killing will not solve the legacy of the past – argues Jeffrey Donaldson
Social share: 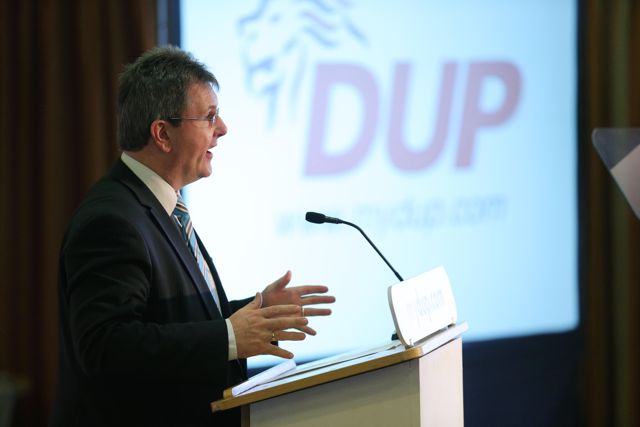 The latest revelation that the Police  Ombudsman is taking the Chief Constable to court over the release of information linked to past killings, coming on top of the debacle over letters issued by the NIO to so-called ‘on the runs’, serves to highlight again the need to find a better way to deal with all of the issues related to our troubled past in Northern Ireland.

On Monday I attended the latest meeting of Party Leaders at Stormont to discuss the way forward for the dialogue that aims to reach a consensus on how we deal with some of the most protracted and challenging issues remaining to be resolved in connection with the peace process and dealing with the legacy of our troubled past.  Intensive discussions will now take place between the parties but I do not underestimate the task that we face to reach agreement.  These issues are the most sensitive of all the matters that we have dealt with throughout the past twenty years in which I have been involved in dialogue and negotiations.

Over ten years ago, Philip McMurray walked into my office in Lisburn to discuss the murder of his wife and fellow police officer Colleen McMurray in a mortar attack on the police vehicle in which she was travelling at Sugar Island in Newry on 28th March 1992.  Colleen was just 34 years old when she was killed and the driver of the vehicle Constable Paul Slaine lost both his legs.  Paul was the officer presented with the George Cross by Her Majesty the Queen to mark the courage and sacrifice of the Royal Ulster Constabulary.  Colleen’s family believe that the security forces may have received information prior to the attack that could have saved her life.  They have lived with this doubt all these years and when Philip came to see me, we decided to take his concerns to the Police Ombudsman.  Some ten years later we are still waiting for answers.

There are many of the families of innocent victims for whom the long wait for truth and justice seems interminable.   The Belfast Agreement in 1998 failed to deal adequately with the needs and rights of innocent victims – one of the reasons I voted against it.  There have been various initiatives since then, including the Haass talks, but to date there has been no consensus on how we deal with legacy of the past.  Yet, every week another issue jumps up from that past to cause more pain and anguish for those who have suffered enough already.  We have to find a better way of dealing with these issues.

It is against this backdrop that one of the Party Leaders at the talks on Monday suggested that another matter, albeit an important one, should take precedence over dealing with the past.  He threatened to walk away from the table unless this happened.  Frankly, it is the responsibility of ALL the Leaders of the parties in the Northern Ireland Executive to remain at the table until we find a way of addressing these issues properly.  I recognise there are some at the table who bear a huge responsibility for much of the suffering that has occurred and they have an agenda that involves rewriting the narrative of the ‘troubles’ in order to justify their campaign of terror and saddle the Police and Army with the bulk of the blame.  Such a situation would be an absolute travesty.

The reality is that 90% of the killings in Northern Ireland were carried out by so-called paramilitary organisations.  60% by republicans and 30% by loyalists.  Only 10% of deaths were caused by state forces, many of them entirely lawful actions in response to terrorist activity.  Despite this, the current system is weighted heavily towards state killings, with inquests, ombudsman investigations, costly public enquiries etc.  We need a new process for dealing with the past that holds the paramilitary organisations to account and enables the innocent victims to pursue their quest for truth and justice.  This new process must ensure there is no hierarchy of victims and that the rights of innocent victims are recognised and their suffering is properly acknowledged.

One thing is for sure, the status quo is not an option. Any Party that fails to fully engage in finding a way forward is letting the victims down and by implication is settling for a current system which has failed miserably to deal with our troubled past.

(This article appeared on Jeffrey Donaldson’s website earlier today. Mr Donaldson forwarded the article directly to eamonnmallie.com to be considered for publication on this website).