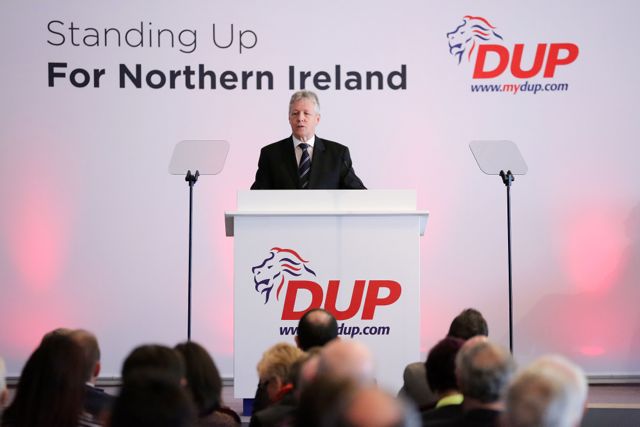 As Naomi Long said scathingly on BBC the other day, managing to sound simultaneously polite and caustic, nobody ever accused Peter Robinson of displaying grace under pressure.

But while the two May elections were obviously disappointing for him, nobody could have expected an outburst as injuring as his comments on Muslims.  The graciousness of the response of local Muslim leaders to his comments served only to highlight his extraordinary tactlessness.

He wreaked major damage on the image of Northern Ireland. He also – and this could be hugely damaging his party next year – made it much more difficult for David Cameron to contemplate a parliamentary deal with the DUP in exchange for its Commons votes. Any Conservative – DUP pact could cost the Tories dear in terms of lost Muslim votes.

Following two elections which signalled a flagging of the DUP’s previously powerful electoral momentum, and in advance of two more, Peter Robinson must be wondering whether after four decades in politics he is running out of road.  Some in his party must be wondering that too.

There is as yet no sign of any putsch to remove him but, as Ian Paisley discovered to his cost, the DUP can move slowly and surreptitiously but ruthlessly.

As Paisley’s Mallie interviews illustrated in wince-inducing detail, the old leader was scandalised to his core by his removal.

Robinson will now be analysing his own future with greater clarity and realism, and will be quite aware that DUP backbenchers will be sizing up his performance and his potential.

With his more manageable ego, he is much more capable than The Doc of spotting any signs that the party is coming to conclude that he is no longer the asset he once was.

His electoral performance, coupled with the Muslim debacle, is bound to lead to a discreet shaking of heads over the teacups in the tearooms of Stormont and Westminster.

He has certainly rendered the DUP considerable service over the years, but his usefulness has reduced. For one thing, his value as a personal vote-getter in east Belfast diminished when he lost his Westminster seat.

The recent elections have demonstrated that losing east Belfast to Naomi Long was not a one-off failure but, worryingly for the DUP, part of a pattern of deterioration in his grasp of the electoral intricacies of vote management, at which he used to excel.

In his early years as First Minister there were mixed views about his capacity to bring something new to politics. He initially worked surprisingly well with Martin McGuinness; he spoke of shared education and other initiatives for bringing the communities together.

Then when the Iris affair burst on an astonished world McGuinness and Sinn Fein conspicuously refrained from adding to the waves of criticism and derision which engulfed him. Instead, Sinn Fein took a conscious decision to offer quiet support. This was based not on any natural sympathy for his plight, but rather on the calculation that it was in republican interests to help keep him in office rather than try to bring him down.

There were certainly signs that Robinson recognised and appreciated this approach, for the DUP-Sinn Fein relationship seemed for a while to work well: in particular the two politicians presented an impressively united front in denouncing dissident republican violence. But the sense of goodwill initially generated by this approach is long gone.

Events, dear boy, events, got in the way and the various difficulties developed into today’s Stormont deadlock, dispelling any sense of partnership. The problems which helped bring this about – parades, flags, the Maze, the past, the semi-comatose state of Stormont and so on – are real enough. But they are not insuperable, and one of the charges levelled at Robinson is that he has scored no successes in resolving any of them.

While he and the DUP are not fully to blame for any of them, a competent First Minister could reasonably be expected to make some progress on some front.  Yet there is little for Robinson to point to as even modest successes in these areas. As the months went by many lowered their expectations of him, categorising him as a manager rather than a leader.  Now increasingly the question is whether he is losing his touch as a manager.

Whatever ambitions he may have held when he took over, his horizons have contracted drastically. The notion of building a new and more harmonious society now seems almost risible; relations among the parties are poor; competition not cooperation is the order of the day.

Today there is not much violence but, equally, not much harmony either. And no real sign that Robinson has a viable plan for making progress, either for the benefit of his party or for politics in general.