You are at:Home»News & Current Affairs»Opinion»“Being British is about a tradition of shared ideas and values. Not bloodlines” – avows Brian John Spencer
Social share: 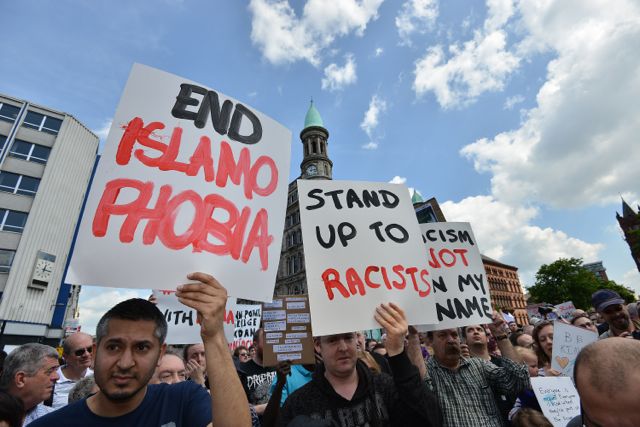 You know you’ve entered the realm of the absurd when you get a telling-off from Jamie Bryson on electoral politics. Yet more absurd being tagged “monotonous” by a man who has spent the last year spilling monotony about the erosion of British-Protestant values and the appeasement of legitimate, elected politicians. Beyond absurd being labelled intolerant for criticising someone who preached intolerance when telling his congregation to mistrust Muslims. That last one bends the mind.

Jamie made a number of points against my original article, I want to address these in turn.

He, as First Minister of Northern Ireland, owes a blind statutory duty to treat all citizens equally, irrespective of religion or political allegiance. By making a shameless defence of Pastor McConnell’s racist comments, he has stigmatised and isolated a minority population and failed in his responsibility to the people, minority and majority populations, of Northern Ireland.

This episode isn’t about offending people. It isn’t a question of free speech (that’s simply a straw man created by members of the party who ironically oppose the liberalisation of speech laws.) This is about targeting a minority people and inciting a majority to fear that minority. And leave no doubt, Pastor McConnell made racist comments. He called Enoch Powell, a man whose apocalyptic vision of immigration incited race riots, a “prophet”.

Already The Irish News has reported on a victim of a vicious racist assault who said that Peter Robinson’s comments “lit the fire” that triggered the attack. Absurd words and ideas can mobilise people to commit horrific attacks.

On political correctness, I am on the record as repeatedly and robustly opposing this convention as the worst kind of censorship and the pernicious cause of self-censorship. I believe Islamic extremism exists. I believe that it needs to be fought and eradicated; but you do not fight extremism with the bombastic extremism exhibited by Pastor McConnell.

On being offended, I am also on the record as saying that this is an empty slogan that has become a vacuous and meaningless cultural tick.

To be clear, at no time did I say that anyone should be arrested or investigated or prosecuted for hate speech. You defeat bad speech with good speech and good argument, not prosecution and criminalisation. I oppose the New Labour hate and terror laws. I proscribe to the Glenn Greenwald school that says that “few ideas have done as much damage throughout history as empowering the government to criminalize opinions it dislikes.”

British exceptionalism comes from its history of tolerance, pluralism and opposition to governments and people that preach religious and race purity. Being British is about a tradition of shared ideas and values. Not bloodlines.

There is no set British way of life. To say there is a proper indigenous British people makes a mockery and parody of Britishness. Stuart Hall, cultural theorist and founder of cultural studies, said:

“I think that the British have a future only if they can come to terms with the fact that Britishness is not one thing and has never been one thing there have been a million different ways of being British.”

Thirdly, it wouldn’t be Jamie Bryson if we didn’t hear from Churchill or Hitler. He’s a junky for Godwin’s law. A sure signal for bombast, myth, exaggeration and reckless overstatement.

The invocation and ventriloquising of Churchill and what Churchill would do is dangerous and this habit is giving him the sound of a sinister patriot who longs for the sweep of empire and the return of a greater Protestant Britain.

I take it as a great slander against my name to say I would appease the exterminationist Judophobia of the German National Socialists. I would not appease but fight that intolerance, just as I won’t appease but will fight the intolerance exhibited today in Northern Ireland.

I am an equal opportunities oppositionist and will shed light on madness and duplicity wherever I see it, that includes Pastor McConnell, Peter Robinson, violent minority of loyalists and the iliberalism of Islam as I sought to do here. I believe in civil intolerance and that requires us to promote tolerance and fight intolerance in conciliatory an constructive ways.