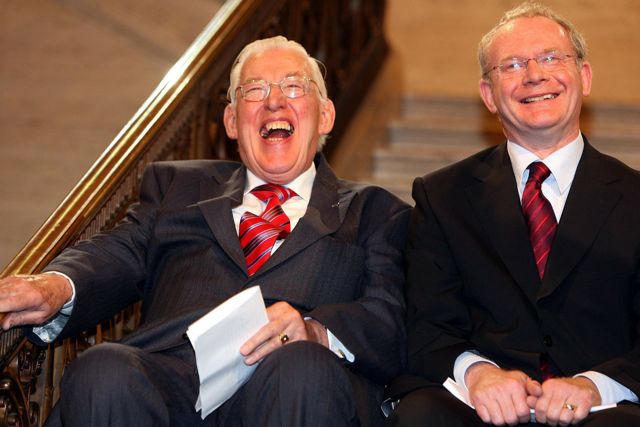 The importance of political relationships was highlighted this week in Mark Carruther’s interview with Nigel Dodds and Martin McGuinness, when reference was made to the “frostiness” that exists between their respective party’s MEPS – Dianne Dodds and Martina Anderson.

Honest men don’t doubt the great difficulty involved in building better relationships, especially in a province torn apart by thirty years of bloody civil conflict. Nevertheless, the task is not impossible. Where there’s a will, there’s a way.

The former DUP leader and Northern Ireland’s Deputy First Minister had the will and found the way. As Mr McGuinness said, he and Ian Paisley had not only a good working relationship, but a good personal relationship too.

Although their working relationship was brought to a premature end by ecclesiastical-political assassins, the warm personal relationship they shared continues to this day. As a matter of fact, Mr McGuinness has treated my father with a greater deal of care and respect than a number of my father’s fellow-churchmen and DUP colleagues. This is apparent to all.

Nigel Dodds complained in the interview that charges of “cowardice” levelled at Peter Robinson don’t help build relationships. Maybe so. On the other hand, where fault isn’t recognised and acknowledged it is practically impossible to begin building. Of course, no man is faultless. But over-reacting to criticism can only exacerbate a strained relationship, and is a barrier to reconciliation.

It is up to political representatives from all parties, and on every level, to redouble their effort in building the peace by building relationships. No one expects uniformity. At the same time, no one craves continuing discord!