You are at:Home»News & Current Affairs»Opinion»Is Unionism for Londonderry but not Derry? – by Terry Wright
Social share: 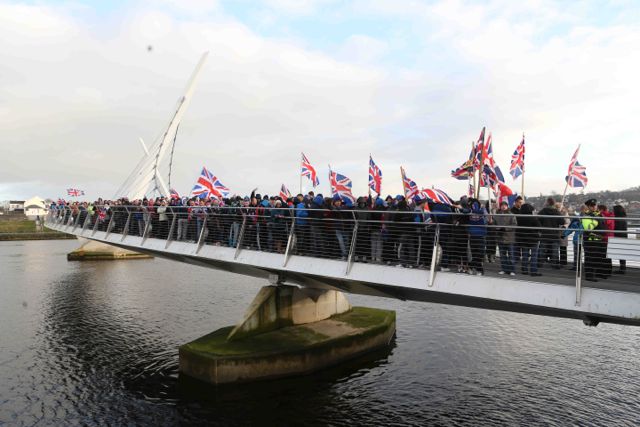 As with other places big and small throughout Northern Ireland the streets of Derry/ Londonderry are festooned with election posters for the local and European elections. Large amounts of money and effort have clearly been committed to their design and display.

The impact and value of election posters is debateable for they at most receive a cursory glance from many passers-by. It is a research task parties could usefully undertake.

More readily apparent are the choices that parties are making in regard to the placing of the posters.

In Derry/ Londonderry none of the main Unionist parties have put up election posters on the city side or West Bank of the city.

This is explainable to some extent in that none of these parties have local government candidates running in the ward based there. This seems a lop-sided decision in itself. However, is it not the case that their candidates for Europe compete for votes throughout the country? What does it say of unionism when it fails to advertise the fact to all the electors of Derry/ Londonderry? Is unionism, as represented by the main parties, now merely tribal and communal and content to abandon the electorate of some areas of the city? Is unionism for Londonderry but not Derry?

In the light of prevailing evidence this seems a valid conclusion and seems to point to a unionism wishing only to talk to itself and a throw-back to the genetic profiling of ‘ marked’ registers.’ In spite of the peace process and claims to inclusivity, it continues to live with its wounds and views voting as damage control. Does unionism not realise that when you choose your voters and give up on some of the electorate, you effectively give up on yourself? It is a lazy sense of unionism that treats one chosen constituency as worthy of respect and allows prejudice to manage the campaign.

If you opt merely to appeal to your ‘ tribe’, identify only with narrow socio-cultural symbols and emblems and treat as unwanted other cultural and social groups then this is a target you will surely hit.

If you aim at nothing then this is what you get. You end up dealing with problems of you own invention. It is ragged politics. Regrettably, in the case of unionism in Derry/Londonderry it would seem the Peace Bridge crosses only one way.

This does not augur well for any new council that may emerge if any unionists who win seats approach their task from a narrow perspective of defensive and negative defeatism.

Skewed motivation will produce skewed outcomes and fail to provide the radical leadership that is required to address old prejudices that continue to blight the community from within all political arenas.

In spite of the progress, sometimes cosmetic, that has been made in the city in cultural and social terms, sectarianism and communal division remains a political commodity for some of the main parties.

Since the late 1960s the city has been effectively divided with resulting geographical and social segregation in terms of education at all levels, housing, social and cultural activities.

Whilst there are leaders who believe that community reconciliation cannot be left up to the politicians and younger generations mix naturally in many settings much community work, on all sides, is in the gift of party activists who serve an over-arching party political strategy rather than one which is grounded in the needs of the community. The city as with the whole area which now constitutes the new Council needs better politics. It seems that unionism mirrors its perceived political opposition and will be found wanting.

The new Council area, in an unfavourable geographical location, needs social, educational and economic investment. Infrastructure is not fit for purpose and an impediment to progress. It requires not the politics of party political preservation but strategic measures and joined-up actions to begin to achieve the many plans and targets that proliferate for the area. Political fragmentation and partial disengagement by any one political party will not achieve this.

Unionism has an opportunity to address this. It has a history in the city of marginalising sections of the electorate to the point of abandonment. It is unfortunate that in selecting those with whom it seeks to communicate, it may be running the risk of repeating past errors.