You are at:Home»News & Current Affairs»Glenn Bradley’s reflections on his Uncle Hughie who has died
Social share: 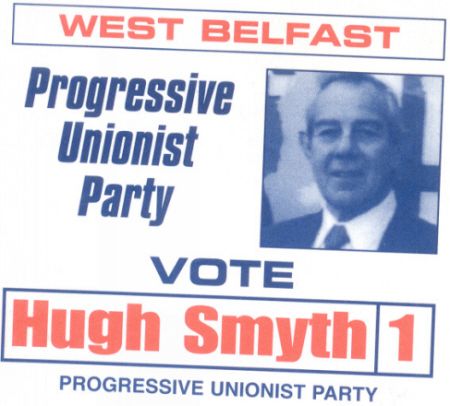 No doubt many will be penning or contributing their thoughts to my Uncle, my God-father, my mentor and my friend: Alderman Hughie Smyth OBE or as we in the family call him ‘Shughie’ or ‘Uncle Shug’ who passed away today after suffering that scourge of disease, cancer.

Contrary to what Wikipedia states, Hughie was born on 16th March 1939 and had he been born on St. Patricks Day would have been called Patrick! He was 6th child of Jimmy and Martha Smyth and was the youngest of the boys (his older brothers being Uncle Bobby & Jamesy). He was named after his Grandfather who’d been an original Ulster Volunteer and at that time was the patriarch of the clan.

During the Belfast Blitz in 1941, like so many West & North Belfast families, they fled to the Black Mountain for sanctuary and my Granny Martha (Hughie’s mum) regaled me on stories of what a labour it had been trying to get Hughie into his gas mask.

His professional life began in that great West Belfast Industrial Institution, Mackies, and like his own father Jimmy who worked up the Whack in McGladdery Brick works Hugh took an active interest in Trade Unionism.  Hughie had initially been very good living, holding office as a Sunday School Teacher and upholding the Christian Principles of an Orangeman through offices in GOLI and the RBP where in the latter he’d become a lecturer.

Like so many in the 1960s era, from the Unionist Working Class areas, he heard IRA threats of violence and purist dogma for the 50th anniversary of the Easter Riding and became increasingly fearful when such rhetoric (and later violent action) was not condemned by the Government of the Irish Republic. He became ever more militant and as he said himself in later years of that time “personal and community fear fuelled everyday minds, it stifled logic generating indecisiveness then stagnation which was sucked up in angry violence”

As the Troubles erupted in 1969 and the war machine of the Provisional IRA heaped sectarian suffering on the people of his beloved Woodvale & Shankill, Hughie made the decision to put to good use his Trade Union talents and self-confidence from RBP lecturing days to become an early spokesman for the modern Ulster Volunteer Force. The UVF had been formed in early 1966 by his close friend Gusty Spence along with other Unionist figures and comrades taking the name after the early Ulster Volunteers (in which Hughie’s Grandfather had served).

When I would ask Hughie why he entered politics for real in later years he told me, “Our working class communities had been voting fodder for the Official Unionists for so long, we’d been institutionalised not to think. Every 3-4 years members of the fur coat brigade would show up, wave a Union Jack, tell us we were in peril from the Catholic IRA reminding us what had happened to the protestants of the south then ask for our vote and we’d give it, time and time again. Then we’d never hear from them. In the mean-time poverty continued and working class quality of life issues where not being addressed. You couldn’t complain to Church or Police or Social Welfare because THEY were all part of that 1 party establishment. Our community needed a voice that would deliver for the area, improve working conditions for the workers of the area. We had to get a voice of the real people in and make it be heard”

The people mandated Hughie and he first entered Belfast Corporation as an Independent Unionist Councillor. In 1973 this became Belfast City Council and Hughie faithfully served the people of Court Ward in Council from then to his retirement (to ill health) in January this year becoming the longest serving Councillor on the Island of Ireland. He was also successfully mandated by the People when as an Independent he was elected to the 1973 Assembly and the later 1975 Convention.

Faithful to friends he continued to be a political spokesman for the UVF and with the ever increasing number of young Loyalists going through the court system to Long Kesh, he worked with colleagues inside and outside the Kesh to help develop a positive, progressive socialist based politic for the Unionist community. This policy was less about flags, and outward symbolism and had all to do with addressing poverty and quality of life matters through socialist delivery for the people. In 1978, with the blessing of UVF prisoners, the Independent Unionist Group was formed. In 1979, the group changed it’s name to the Progressive Unionist Party, and as a teenager I’ve nothing but fond memories travelling the length & breadth of Northern Ireland with Hughie as he gave speeches or raised funds, shaking the contribution tin, at numerous events or selling ‘Combat’ or UVF LPs outside some of Belfast’s finest pubs or social clubs.

On one such occasion I can remember us being stopped by the police in Donaghadee where the constable explained “Do you realize this is a one way street?” to which Hughie quipped, “sure we’re only going the one way” or the time we returned to the car to find it had disappeared and as he was speaking aloud going “I could’ve swore I left it here” an Army Saracen drove past with the mangled remains of the car being towed behind – they’d blown it up as he’d left it in the clearway zone!

Hughie served as Deputy Lord Mayor of the City of Belfast in 1983 and 1993. He was Lord Mayor of Belfast during that monumental year of 1994 when the 1st Provisional IRA conditional cessation was proclaimed. Afterwards he stood on the lawn of Belfast City Hall imploring the UVF, RHC & UDA to respond with the greater gesture of a permanent cessation.

Hughie was involved in the negotiations to deliver the Good Friday Agreement, and post that as more capable, younger politicised men came through the Party, he chose to stand aside as Party Leader in 2002 handing the reigns to David Ervine.

He continued a role as President of the PUP, and of course delivered constituency work to the people of Court Ward with humour never far away: when Niall Ó Donnghaile became Belfast’s youngest Lord Mayor in 2011 Hughie quipped “I’ve coats in my wardrobe older then you”.

Ill health took Hughie out of public life for much of 2013-14 though as a family we continued to meet when we could, and his humour, with love of family remained to the end.

The last decent lengthy conversation we had was during a visit in March when we were discussing (amongst many other things) the peace & reconciliation work I now contribute towards. As I’d been collating and recording some of his quips and life memories through conversations I wrote his words down:

“With the benefit of hindsight there are so many terrible tragedies that could have been avoided in this wee place over the years.  Anger, sectarianism and intentional provocation all consumed so many of us for so long. If you’re working to remove that anger, sectarianism or provocation then fair play to you son but know this, some, will detest you for it because it’s all they know and some lack the ability or courage to see themselves for what they are or let it go for the greater good.”

At this juncture I was frowning, and he laughed continuing,

“Look at ye frowning, run around with a frown and you’ll get the world frowning back at you, smile will you and remember transformation requires real honesty and some, on all sides, can’t be honest or deal with truth. Watch yourself and be mindful to past friends but continue this work because any eejit can fight or agitate or shout but it takes true personal courage to be a peacemaker. Real peace making is not about us: it’s not what Hughie Smyth or Glenn Bradley gain today but about is what we do for the wee ones. It’s about getting together, being honest and saying never again. It’s about saying our constitutional political aspirations are poles apart but our socialism is in all practicality the same so let us agree to deliver to improve the quality of life for the people today. Blessed are all peace makers for they shall inherit the earth”

My uncle Hughie was there the day I entered this life; he was my god-father & nurtured me (and many others) as if we were his own; he was my mentor saving my bacon on more than 1 occasion with good advice and life anecdotes but most importantly he was my life-long friend who I will terribly miss. I give thanks to the Universe for his life and I hold dear the cherished memories of a life well lived.  Peace after suffering.

Social share:
Previous ArticleKyle Paisley… The IRA has gone away but Jean McConville’s abductors/killers may still be with us
Next Article “He uses Northern Ireland and abuses it” – Kyle Paisley on David Cameron