You are at:Home»News & Current Affairs»‘You’ve got to accentuate the positive eliminate the negative’ (with apologies to Johnny Mercer)
Social share: 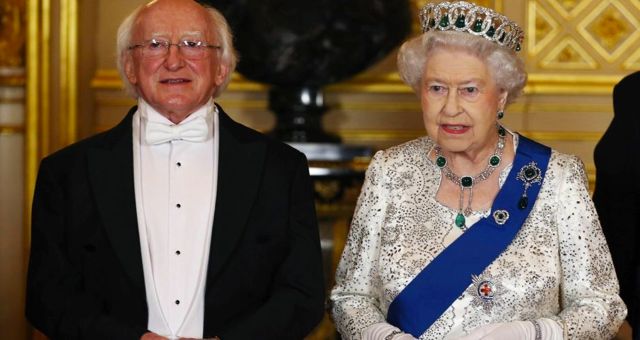 The pomp and circumstance of the Irish Presidential visit to the United Kingdom has paled into memory.

The carefully choreographed receptions, visits and content speeches in various locations made for comfortable viewing. The headline-grabbing attendance of the Deputy First Minister who paid due and courteous deference to the Monarch in her home has been replaced by plans for Britain’s acknowledgement of the blood sacrifice of 1916. It is unlikely surely to be framed solely around a republican agenda. There were many others from the island who made sacrifices in 1916. Easter is only part of the narrative albeit a pivotal part.

Reconciliation and conflict resolution are achieving what they are meant to achieve.

This seems at the heart of the implied legacy of the visit but is it a flawed legacy?

The improvement in relations between the governments of the Republic of Ireland and the United Kingdom are to be welcomed. In spite of inter-dependency, strong trading links and familial ties it took longer than necessary.

They have taken time in facing down demons and addressing issues that produced division, suspicion and hostility inappropriate in the European and global context in which both countries manage their affairs. They have embraced reconciliation.

Reconciliation was writ large in speeches and public events. There is a clear signal to those who gathered from Northern Ireland that with the Peace process in place and a public mood for change the two governments are mapping a path for others to follow. There was no demand to finish the job but this is clearly the message. It echoes the words of Presidents Obama and Clinton during recent visits to Northern Ireland.

There is clear desire perhaps an almost ‘colonial tedium and impatience’ on the part of both governments to consign Northern Ireland, like some troublesome and unwanted possession to the ‘problem-solved’ tray. It is a drain on finances and energy and one can empathise with the fatigue. Try living under the governance of the NI Assembly 24/7.

The speech this week by Theresa Villiers which focused on economic development, dealing with the past and advised as to the need for review of political structures has however already provoked responses which suggest that in Northern Ireland reconciliation is not so easily achieved.

Politicians have already cherry-picked the contents of the speech to welcome what they like and ignore or oppose what is less to their liking. True to form, political rhetoric is over-laden with the conjunction ‘ but ’.

Governments in London and Dublin may seek distance but Northern Ireland with which they remain intertwined, continues to provide a measure against which, as with all the participants, moral and ethical leadership will be assessed.

The Secretary of State did make a valid point when she spoke of the need for balance in dealing with the past.

In addressing the past and its legacy, agendas cling to partisan narratives. Each has relevance in providing insight into causal factors that, like relationships, are deeply interwoven.

More problematic is where the narrative stretches to argue legitimacy for associated actions and the decisions that influenced them.

What appear to be just causes and just decisions do not always produce just actions. It is not always about the cause but the nature of the conflict

In Northern Ireland hate-filled and indiscriminate brutal sectarianism was characterised and sanctioned as a noble cause on all sides. It served only to contaminate the moral environment and continues to do so through an absence of open acknowledgement, accountability or remorse. It remains expendable to ideology and sealed belief systems. It closes routes to justice and transparency for victims on all sides as we hold on to the worst of our history. In the same way that paramilitary organisations claiming to protect communities came to be their oppressors through forced convergence, their silence now holds hostage hope for a better future.

There are advocates of moving on. It would be an attractive neat fit with building a future but victims would have to become invisible.

They may not get justice but they cannot be denied the right to know. It was not uniforms that were killed and maimed; it was people. Victims of government decisions that produced breaches of human rights are more than a statistic. There are categories of victims but they are victims none the less.

In the light of the revelations over the OTRs, the Enquiries that this has spawned and with several on-going investigations in various spheres into alleged atrocities and injustices by state forces, moving on becomes more unlikely. Revelations about guns from Florida further erodes trust.

It is now seen that only the surface has been scratched and then, without due rigour.

Where there should be revelation and atonement, a history of side deals, secret burials and tawdry politics render morality a sacrifice to pragmatism.

The result has been to diminish confidence in the judicial system and the political process.

It can be recovered.

Respective leaders worthy of the name must find a better way to lead their constituencies. It is not just about dressing up to attend state dinners. The dour monotony of codified messages and selective memory gets in the way of what should be done.

No longer ‘Tiocfaidh ar la.’ The day has come.

Conflict resolution requires action as well as aspiration and words. The challenge is to render conflict resolution redundant by acceptance, without pre-conditions, of the results of actions undertaken and the public recognition of such acknowledgement.

Without this ‘dealing with past ‘ suffers from a credibility gap and fails to redress pain and grief of loss and injury.

We would do well to remember that dealing with the past says more about our present and it this that purchases our future.