You are at:Home»News & Current Affairs»There will be no winners in these wars – Brian Rowan on efforts to take ‘dissidents’ into a dialogue
Social share: 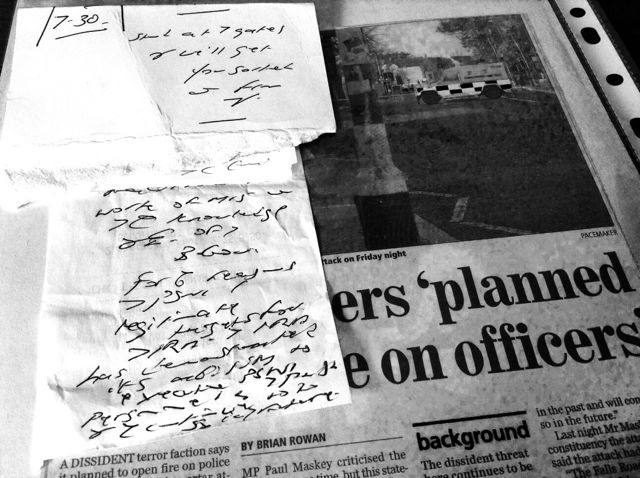 A little over a month ago a call to my mobile phone was the beginning of a sequence of events that took me to a meeting with representatives of the dissident group now using the IRA title.

In that brief phone contact a meeting place was arranged and a time.

“Stand at the gates and we’ll get you sorted out from there,” I was told.

A few days earlier, PSNI officers had been targeted in a mortar bomb attack on the Falls Road – the explosion heard in many parts of Belfast.

And, the meeting that had just been arranged, was to issue a so-called claim of responsibility.

One of those I met took the statement from his shoe and the other shone a small torch as, in the dark and the wind, I scribbled onto several scraps of paper including a receipt.

Over many years, I have been in this type of situation many times.

No one had been injured in the attack and, while there was some shrapnel damage to vehicles,  I had been told the device had not made a direct hit on its police target.

The ‘war’ statement read to me however gave a different version of events.

Here, I am going to publish its full text:

“On Friday March 14th 10.30pm an active service unit of the IRA embarked on an operation against British State forces – namely a PSNI patrol.

This attack involved the IRA striking the PSNI Land Rover as it passed the City Cemetery on Belfast’s Falls Road.

The IRA had a second active service unit with automatic weapons close by with the intention of engaging personnel who exited the vehicles.

The device used in this offensive action was an explosively formed projectile (EFP) detonated by command wire.

These devices form a major part of the IRA’s already substantial weapons inventory.

Our development of this type of device is further evidence of the increasing expertise and ingenuity of our engineering department.

The precision of the device is evidenced by the fact that it struck its intended target.

The PSNI are the vanguard of British occupation and oppression in Ireland.

They are the heavily armed protectors of the State enforcing British law in Ireland.

They engage in harassment of Irish citizens on a daily basis, arrest republicans and facilitate the work of MI5 with the full knowledge and backing of the British Government.

For these reasons the PSNI are legitimate targets for the IRA.

The IRA has demonstrated its ability to execute PSNI personnel in the past and will continue to do so in the future.”

The statement came with claims of a new Semtex supply and detonators – all, of course, impossible to verify.

Only a few weeks earlier the Belfast Telegraph’s Political Editor Liam Clarke had published a security briefing painting an entirely different picture; that the dissident factions were struggling – short of both weapons and numbers.

What we know for certain is that the various groups are compromised – that the vast bulk of their planned activity is interrupted, that on many occasions devices malfunction or are abandoned and that numerous arrests have been made.

Yes they have the capacity to kill, but not to sustain a campaign and, from inside the ‘dissident’ republican community, there is a louder questioning of the purpose of such activity.

In recent interviews both with the Irish News and, in the past few days, with the Irish Times, Dominic Og McGlinchey – son of Dominic and Mary McGlinchey both of whom were murdered in the pre-ceasefire years – has added his voice to that debate.

He told the Irish Times Northern Editor Gerry Moriarty: “I don’t see mass appetite at a street level for the armed campaign…

“We should not be bound by the weapons. Just because they are there does not mean that they have to be used.”

What he is arguing for is another conversation that is focused on removing the gun from Irish politics.

Whether he is speaking for himself or representing a wider view is not the issue.

His comments should not be dismissed.

This is the conversation – the dialogue – that is needed.

Just look at the Good Friday killing of Tommy Crossan in west Belfast – the public execution of a one-time leader of the Continuity IRA in the city who fell from high rank.

The dissident factions have become a confused and confusing mishmash of ’cause’ republicans and criminals, some of whom can’t go away and others who won’t go away.

And, those who genuinely disagree with the Adams and McGuinness strategy are being lost in that mix – not heard above the sound of guns and bombs being used in some pointless and pathetic play.

None of this will change Ireland – will alter political agreements or security policy.

It is a phoney war and the real challenge is to take the words and thinking of those recent interviews into some structured process of dialogue.

It needs to separate those ’cause’ republicans from the criminals, and whether the dissident IRA has new Semtex or not will change nothing.

That statement a month or so ago was words on paper.

What is the killing for – who is it for?

Those are the questions.

There will be no winners in these ‘wars’ – only losers and more stories of graves and jail.

Is that what the fighting is for – why the guns are still being used?