You are at:Home»News & Current Affairs»Opinion»The ‘Troubles’ with ‘Truth’ – by Brian Rowan
Social share: 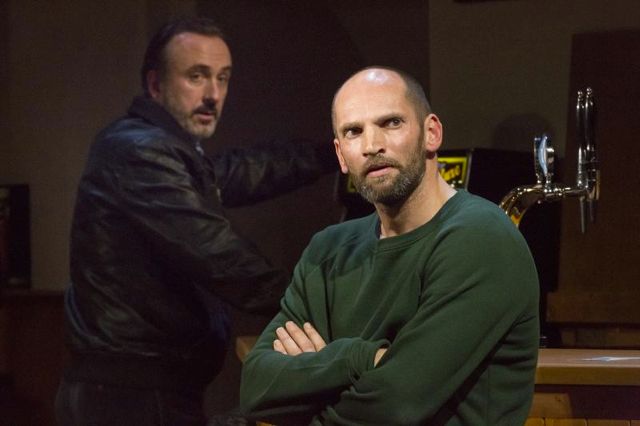 For a little over an hour last night the stage of the Lyric Theatre became the place of some ‘Truth’ process.

It happened when Owen McCafferty’s powerful and painful play ‘Quietly’ brought two men together decades after a Belfast pub bombing.

They were from very different parts of the story and this was their first meeting.

The characters in the play – both living and dead – are completely fictional, but there was something very real and authentic and credible about what we saw and heard in that tension-filled hour.

At times it was hard to look and hard to listen as Quietly raised its voice above its title to call us back into the darkest years of conflict and to remind us that the past is in the here and now.

Its story would fit into many different frames, speak out of the rubble of many bombs, fit into the cemeteries and the places of tears and anger and into those situations in which there are no words and too many words.

It is out of this mess and muddle and maze of dead ends that we pursue and search for this thing called ‘truth’ – the subject on which I was asked to speak alongside the cast and writer on Thursday:

I remember as I read my way through David Park’s novel ‘The Truth Commissioner’ there was a line that jumped out at me.

He was describing the experience of one bereaved family inside the Truth Commission that he had created and structured within his book.

And, after some vague expression of regret, the ‘Truth’ process was over and, when they realised this was all they were to be given, it suddenly dawned on them that it wasn’t enough.

Park paints a word picture that many who have lived through the conflicts of this place will understand and recognise.

He wrote: “Often at the end – they [meaning the bereaved families]have to be helped from the chamber as if they haven’t grasped that it’s all over, that their time has finished, and then they shuffle towards the exits, their confused white-salted faces glancing back over their shoulders.”

We still live in a place where many look over their shoulders – haunted by the ghosts of what happened and what could still happen.

The reality is we can’t make everything right.

There are broken people who need all the help we can give them but who can never be fixed.

We can’t bring back the dead.

Truth is not a tablet – or a medicine or some kind of magic wand.

It can be a poison,

Yes, of course, I understand it can help – but not in every case and not in all cases.

We have to accept and understand that there will be times when words and information and explanation will add to the pain rather than heal the hurt.

And we shouldn’t confuse truth with apology.

We shouldn’t assume that those who created and participated in what happened will ever speak an unequivocal sorry.

And we shouldn’t be sucked in by the simplistic notion of one truth.

Listen to the word play and the word fight on this stage this evening – the argument that the facts are the truth, and the response that there’s more to the truth than facts.

We all know the real-life experience of this place is a book of many chapters – that compete with each other, fight with each other, one to be heard and read over the other in what is sometimes described as a hierarchy of hurt and victimhood.

So, the past is not the past – and in the story line this evening we see and hear how the shrapnel continues to spit out and spread long after the explosion.

For many, what happened is the here and now, and there are those who want to make it today’s battlefield.

It’s political and, for some, it is a play thing – still a game of winners and losers and right and wrong.

This is to ignore the complex puzzle of conflict within which truth is often lost or buried.

There is nothing simple about war and about what happens afterwards.

From my own reporting experience, I will always remember an interview with a former loyalist life sentence prisoner;

Remember it because of the words spoken and what they meant and, then, what happened next.

It was part of the debate about prisoner releases versus victims rights – and I interviewed him as we edged away from conflict and began that journey towards peace.

He described to me prisoners sleeping with the victims.

“They sleep with the victims.”

The prisoners, he told me, “have to live with what’s happened in the past”.

TRUTH, if that’s what we choose to call it, has to be about something more than blame and fault.

It can’t be confined to what happened, but why it happened;

Can’t be as narrow as who did what, but why they did it.

It can’t just be about describing the cold and the cruel acts of violence without the context, the circumstances and the complexity of conflict.

And, all of this will disturb the narrative.

It will shake many of us out of our comfort zones and make us step and think outside our safe places and spaces.

Those many who spent long years in jail did not emerge from the ground one day as part of some bad crop.

And what is our challenge?

That it should never happen again.

The often-heard suggestion of ‘drawing a line’ is, in my opinion, crass and trite and insulting.

But that doesn’t mean we dwell in the past.

Those of us who lived through the conflict years cannot continue to shovel our experiences on top of the next generations.

So, what does that mean?

It means we have to do something – something that is realistic and achievable, and something that acknowledges and accepts and appreciates that there is more than one story or narrative.

We shouldn’t do it just to pick over the past, but with the goal of ensuring that what happened is never repeated.

We need confirmation and affirmation that all the wars are over.

And we need help with the next steps – help from the outside, and for this reason.

We are too close to what happened.

We are too small a place, we are stitched into its fabric.

We remember too much and from our own perspectives and vantage points.

We need to stand in the shoes of others – try to look and see through different eyes, try to better understand the other and try to think above blame and fault.

1/ Let’s accept that absolute truth is NOT achievable – not from any side never mind all sides.

3/ Let’s look at how the maximum amount of information is achieved and about processes in which it is freely given. You can’t drag out the truth.

4/ So, let’s with cool heads look at some of what Richard Haass and Meghan O’Sullivan recommended.

5/ Let’s explore what is meant by Acknowledgement.

6/ Let’s look at how an Archive might allow everyone to tell their story and their truth – an Archive that won’t just remember the headlines of conflict, but everyone’s experience.

An Archive that remembers people, and their names. Not that they were the 100th person, or the 1000th person – but that they were mothers, fathers, sons, daughters, aunts, uncles, nephews and nieces, husbands, wives, partners, grandparents and grandchildren. That they were real people.

7/ And let’s examine how an Independent Commission for Information Retrieval or Truth Recovery might work.

Doing nothing is not an option.

– All sides being honest with all the people about what is possible is essential.

– There should be no false trails and no raising of false hopes.

– ‘Truth’ will not be a parade of shame.

– It will not fix everything that has been broken.

– But more information or explanation might help us better understand not just what happened, but why – and why it should never happen again.

For years we lived in a place in which we were afraid to talk in our sleep.

But, now, at least, we feel safer – more able to express ourselves and our feelings in books such as Park’s ‘The Truth Commissioner’.

Across many media outlets – every day – we are reading a deeper exploration not just of what happened but why.

But we can’t make everything better, can’t undo what has been done, but can try in word and deed to make sure that we don’t repeat the Past.

The Truth of our Troubles, or the conflict, or the wars is that there is more than one truth – and that there will never be an agreed narrative.

And my question is: Can we live in peace with that truth.

I’ll finish with this thought – Yeats told us that peace is something that comes dropping slow.

And, today, there is something else that we must accept – that there may be a longer wait for answers and information and explanations – because ‘TRUTH’, to borrow Yeats thought,  will drop even more slowly.

Thank you for listening.