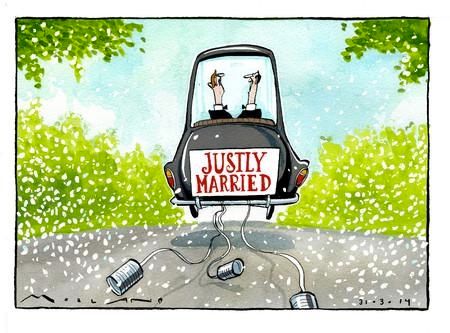 Just as religious hysterics argue today that allowing gay men or lesbian women to marry will destroy the civil institution of marriage, 100 years ago religious hysterics railed against woman’s suffrage on the basis that it would lead to the hyper-masculinisation of women. Just as the religious shrieked in the early 1960s that legalising homosexuality would lead to male prostitutes, we now hear the most slanderous howls that gay marriage will lead to polygamy.

At each stage the religious will have you forget their previous failures in order to mask their present failure.

Debating marriage equality is debating the inevitable. It’s the law of the land in England and Wales and now enshrined in Scotland. In the United States, following the Windsor ruling, state after state has removed the barrier to equal marriage. That’s why the Andrew Sullivan speaks of “The Tidal Wave for Marriage Equality” and Jeffrey Toobin talks of a “legal deluge.”

Andrew Sullivan has called it “the marriage equality end game” and has backed this up with the most persuasive evidence and compelling argument. It’s an end game for two reasons. You cannot deny people the rights that you yourself enjoy. You cannot uphold legislation that stigmatises and marginalises a minority. This is the whole history of western society.

Lord Wilson of the UK Supreme Court recently made an address to the Northern Ireland Medico-Legal Society and asked: “I wonder whether Northern Ireland will for long be able to hold back the tide in favour of same sex marriages which laps against all Western shores.”

Lord Wilson, a member of the Church of England, favours equal marriage, and provided a 5-prong argument in favour of equal marriage based on the history of marriage and its unshakable impulse to evolve and change.

Firstly, Lord Wilson explained that marriage has a history of being closed to certain sections of society. Up until 1863 in Ireland, a marriage between a Protestant and a Roman Catholic was void. In America in 1924 the state of Virginia passed the Racial Integrity Act which made it a crime for a white person to marry a black person. In the UK, inter-racial marriage was long regarded as a threat.

Secondly, Lord Wilson explained how marriage evolved from being a property transaction, often arranged by the couple’s parents in order to secure a dowry for the husband and life-long protection for the wife, to an expression of love between two couple. This, coupled with an increase in life expectancy, made divorce inevitable. So, in 1857, Parliament introduced divorce for England and Wales.

Fourthly, Lord Wilson explained  role of the European Court of Human Rights in delivering rights for the homosexual community. It was the Strasbourg decision in the Dudgeon case of 1981 that led to the decriminalisation of homosexuality in Northern Ireland. It was the Strasbourg court in the Sutherland case in 1996 which led to the equalisation of the age of consent for same sex acts with that for opposite sex acts. It was the Strasbourg court in the Smith and Grady case of 1999 which led to the right of gay people to serve openly in the armed forces. As Lord Wilson said, “These are milestones along the road to equal treatment for gay people.”

He added that the 2013 decision by the Northern Ireland Court of Appeal to find the Northern Irish ban on the adoption of a child by civil partners as discriminatory represented a further milestone.

Fifthly , Lord Wilson explained that same sex marriage is not a new concept. It was allowed in ancient Egypt and in Republican Rome, but became illegal under the Roman Empire. Then, for the next 1500 years, Christian doctrine cast scorn upon all sexual acts other than procreative ones.

Lord Wilson has shown that marriage, like identity, is not static. Marriage is fluid, ever changing and an institution that adapts as society evolves. In spite of this, the DUP has blocked the latest attempt to extend to Northern Ireland citizens the equal marriage rights that their fellow British citizens in England, Scotland and Wales enjoy. Once again, like the unchecked decision to veto libel reform, the DUP makes a mockery of British values and British exceptionalism that made a tradition of leading in the world.  As I said before on this website, the DUP are acting profoundly unBritish.

Social share:
Andrew Sullivan Civil Rights Act 1964 DUP England homosexuality Human Rights Lord Wilson Northern Ireland Scotland Wales
Previous ArticleThere will be no winners in these wars – Brian Rowan on efforts to take ‘dissidents’ into a dialogue
Next Article “Judge nothing before the time” (1 Cor.4:5) – Kyle Paisley on the arrest of Gerry Adams