You are at:Home»News & Current Affairs»“McGuinness was the protagonist – Robinson was an appendage” – by Brian John Spencer
Social share: 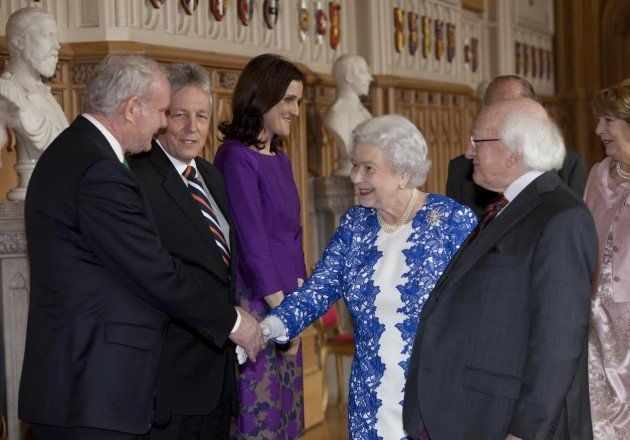 At the State Banquet McGuinness was the protagonist. Robinson was an appendage – a spectator at best.

That’s the difference between the two. McGuinness is the true leader, ready and able to take really hard and dangerous decisions. Ready and able to create new realities and bring his people with him. You can feel the pleasure and sense of shared goodwill across the island of Ireland.

Just as you can’t bomb a million unionists into a United Ireland, you can’t Twaddell nationalists into supporting the Union.

We hear “culture war!” Yet facts say that loyalist culture is “flourishing”. We see loyalists expatiate endlessly on their many grievances. Facts show these fears are “phantom”.

Unionism has uttered not one word of criticism against parades described as “intimidatory” and as a “parody of culture.”

By failing to correct and inform its base, Unionism is betraying its own people and its own cause. Those believing absurdities could commit atrocities.

The DUP in league with street-fighting loyalism have alienated every moderate, pragmatic, liberal and outward looking unionist. Intimidated out of the process and bullied into silence, the moderate unionist either leaves or keeps his/her head down. By this campaign of fear-induced censorship, sense and sanity are kept out, and the delinquency endures.

Unionism is happy to sell out every last sane unionist young person, wave them away in their droves, and get down and dirty with the forces of belligerence leaving the Hannah Nelsons out in the cold.

Externally, Unionism has done nothing but habitually, routinely and serially bring Unionism, Northern Ireland and Britain into disgrace and disrepute and incur the contempt of the world at large, never mind Catholic nationalists.

Here’s the bottom line: Catholics are central to Unionism. The material wellbeing of the Union is entirely dependent on the material support of Catholics. Catholics will outnumber Protestants. It is inexorable and inevitable.

One is easy. Just keep doing what you’re doing. Unionism’s inability to lead has created Jamie Bryson. Who needs enemies when you have the worst elements of Loyalism and the Orange as friends? As the News Letter said: “Loyalists have allowed Sinn Fein to depict themselves as the reasonable democrats.”

Firstly, it requires evidence-based Loyalism, sense, not hysterics, conspiracy and siren voices, a political education programme even. It requires unionism to repudiate, vanquish and face down violent Loyalism and unfounded propaganda, an end to the absurdities before we see an atrocity. It’s time to end the exemption, exceptionalism and the black hole of accountability on loyalist behaviour.

“How many… Nationalists have been persuaded they’re better off in the Union by political Unionism? I rest my case.”

Unionism must step out and beyond the traditional radar, explain this to the people, and promote a confident, compelling, comfortable agenda – for everyone, Protestant, Catholic and non-believer.

To conclude, a profound ignorance and inwardness have long befallen unionism. In almost every instance of leadership, reform and progress, the hand has been an external one, whether from London, Washington, Brussels, Luxembourg or Stasbourg.

Unionism needs to step back, and take some context and perspective. Politics is a battle of ideas.

As David McKittrick said: “One of the inbuilt flaws of unionist political leaderships is their innovation deficiency. Very little in the way of new ideas or bold moves has originated in that quarter, which helps explain why many unionists lack a sense of ownership in the peace process.”

Externally Unionism needs to understand that history is contentious and that you win arguments by logic and argument, not by horse-throated hectoring and being the thought police. Internally, it needs also to tolerate and facilitate more debate and wide ranging views.

Brian Feeny said, any unionist who errs from the hard-line is routinely slandered, smeared and maligned into irrelevance with the call of LUNDY! That is, of course, if they’re not physically intimidated or actually assaulted.

Unionist culture and identity, like everything, should be fluid, changing and adaptive. It is not monolithic, static and stuffed into a bottle of formaldehyde. This requires leadership. Liam Clarke has repeatedly called for leadership. In summer 2013 he called for a statesman. When the Haass talks started he said ‘The time for leadership has arrived.’ Nothing changes. As he himself knows unionism is limp and paralysed by the mad-men. It’s McGuinness who’s cutting the statesman.

Jim Allister is right; the Good Friday Agreement is looking like a rail-road to a United Ireland. Keep doing what unionism is doing and it will be. It doesn’t have to be that way. It’s that way because he and other unionists have promoted the most unwelcoming, out-dated and flat-out parody of what it is to be British. On almost every last policy issue, he and others are glaringly out of step with London. Jim Gibney was on the money when he wrote, ‘Queen Elizabeth filling unionist leadership void.’

Project fear hasn’t worked. It’s going to kick-off this summer and I’m scared. Something has to change. The Union is not a coercive Union. It is an open, free, liberal and tolerant one. The Act of Union created exactly that, a Union, not incorporation. Nothing is inevitable. It can go either way. But let’s have the argument on fact and reason, not horse-throated hectoring, violence, bullying and fear. Peter Robinson needs a signature achievement – a McGuinness headline and a bolt of boldness. As Newton Emerson said, he needs to follow his deputy’s lead. The opportunity is there. Make the unremittingly positive case for the Union.