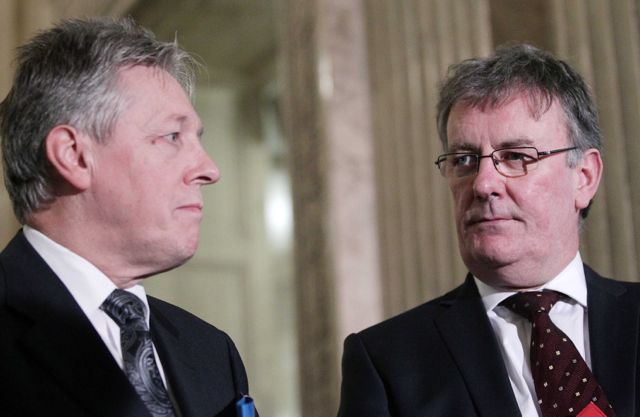 The first cuckoos of spring… again?

Like the first cuckoos of spring and with elections imminent, appeals for unionist unity and pacts are in the air again.

Michael Nesbitt MLA and Leader of the UUP, having said that he would not repeat the arrangements put in place for the bye-election in Mid-Ulster has alluded to co-operation in the European elections.

Arlene Foster MLA and Minister within the NI Executive has called for unionist unity, repeating the flirtatious call made by various members of the DUP at a number of different elections since the Assembly was established following suspension.

Lessons have not been learned from failed initiatives in Fermanagh and South Tyrone and Mid-Ulster where to judge from the conduct of the campaign, it seemed the candidate was ‘ gagged’ to ensure that tension likely to jeopardise what was clearly a fragile deal was avoided.

Mike Nesbitt or whoever is leader of the UUP at any given time has to act sensitively to any proposal for pacts.

Ironically, even though it was the DUP who broke the mould of unionism and eventually emerged as the largest voice, it is the UUP that attracts most criticism on the doorsteps.

Every time the DUP mentions unionist unity the UUP voices no outright acceptance or rejection and has been known to agree pacts from time to time even acting to undermine its own agreed strategy and tactics.

Past experience shows that within the broad UUP church the issue can produce a cacophony of discord and mixed messages.

Why wouldn’t the DUP continue to play the same tactic when it has worked so successfully by wrong-footing the UUP and playing on old suspicions and fears?

Democracy is disposable in Northern Ireland. Local councils can have their period of office extended beyond their mandate; the Assembly is granted another year beyond its mandate. Why worry about narrowing the choice of unionist voters if it might lead to more power and another period in government?

It is also the case that there are within the UUP members who would not be out of place within the DUP or indeed the TUV and for whom the notion of unionist unity has an appeal. It would be their favoured option. Recent words and actions over the Irish language, an invitation to the Pope and the unionist wish list, which informed the UUP response to the Haas proposals, would be a natural fit in either.

Not so long ago past leaders and party officers met with the DUP hierarchy to discuss unity and there have been numerous reports in the press and elsewhere of roadmaps and proposals.

It always seems to be an option never totally ruled out and has an appeal to large sections of the party.

There remain within the UUP many members of the Loyal Orders and so-called traditional unionists. They hanker after a past where unionism was united and influential, if not entirely fully represented, within one party.

It is a false and forlorn hope based on quantitative rather than qualitative assessment and in the light of current demographic profiles and acknowledged unionist failings it is as inappropriate as it is out-dated.

It is an appeal to territory and bonds of blood wherein the past casts too long a shadow.

To judge from recent policy positions under Mike Nesbitt’s leadership that often seem at odds with the more inclusive and pluralist agenda articulated from Conference platforms, improved discipline and the absence of internal critique has been replaced by a more strident and narrow unionism seeking to return to past but now faded glories.

Many within the unionist electorate have moved on and want to re-define their politics in terms of positive social engagement and radical actions that focus on economy, unemployment, health and education.

These are the priority and successful solutions to many of the underlying problems related to these areas which would help to solve issues arising from latent sectarianism, bigotry, segregation and community relations. Cookie-cutter unionism based on old recipes no longer offers relevance or appeal to a large swathe of the electorate.

Unionism should be building interdependence and universal values but you cannot re-construct if you are not willing to de-construct firstly.

Rather, it seems that the greater and more buoyant voice within the UUP is that of Protestant unionists rather than those unionists who happen to be Protestant but believe that unionism must be defined by more than cultural, communal or factional identities and move beyond the fabric loyalism of banners or ulster ties.

There must be those within who feel uncomfortable at the party’s leadership on flags, parades and the past.

Haas is challenging and each party has been guilty of seeking to find common ground as close as possible to its own position but radical and creative unionism should be leading everyone in the community in critically examining where they stood in the conflict. Outcomes must be achievable and permanent. This requires leadership that is transforming rather than managing, morally robust yet redemptive and reconciliatory.

The UUP seems content to indulge in incremental point scoring and to be fair to Mike Nesbitt, he has from his position as Chair of the OFMDFM Committee managed to expose some of the failings and abuses of power within the Assembly. Some individual MLAs have introduced measures that offer progress.

However, on many important issues the UUP has moved closer to the DUP and TUV and to judge from the comments of some MLAs in the Assembly is trying to outdo both. In addition, the UUP remains within the Executive and fails to fully address the need for review, not least opposition and the growing disillusionment of the electorate with the process.

The UUP might be well served by arranging an exchange with the DUP whereby those within each party could be permitted to cross over and find a home most suited to their politics.

One party would probably become smaller but in offering real alternative choices to the voter might eventually grow and bring real solutions to the many problems faced by an electorate currently disenfranchised.

Now that Alliance representatives are likely to be asked if they are ‘ nationalist’ Alliance or ‘unionist’ Alliance there is a vacuum opening up.

If there was one unionist party tomorrow, there would be two the next day so better to have these with clearly differentiated and articulated policies reflecting the vision of a collective and principled leadership rather than the current situation where the worst conflict-prone traits of one narrow and tribal party comes to define both.

In the meantime the DUP has dusted off the electoral drum of unionist unity. But it is beginning to sound like a tired and slow anachronistic lament.

It is a lowest common denominator call to a sectarian headcount and rather than maximising the unionist vote as claimed will drive many of the electorate from the polls and deservedly so for there are no solutions in anger, rage and ragged politicking.

With the two main unionist parties moving towards arrangements of mutual convenience and unlikely to accommodate the need in the near future, it will be left to others to do so.