You are at:Home»News & Current Affairs»Clueless, Clumsy, Claptrap – Brian Rowan on Theresa Villiers play on the past
Social share: 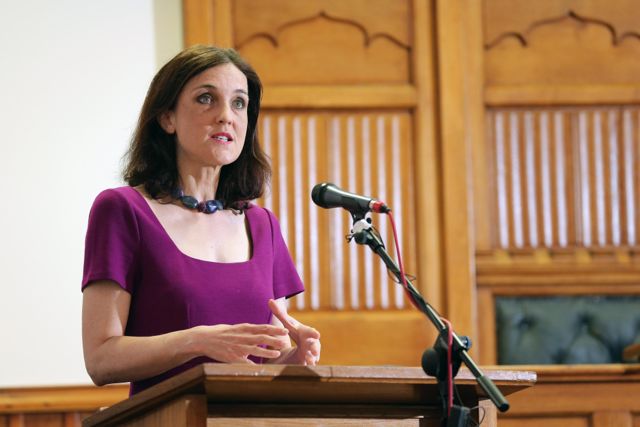 The heading on the Secretary of State’s speech was ‘Moving Politics Forward’ and that is about as far as it got.

This was a words on paper moment – writing it down, reading it out and walking away.

The ‘past’ isn’t going anywhere in this speech from Theresa Villiers. It’s staying where it is.

This was a spectator’s contribution, including that line that there will be no lack of encouragement or support from the UK Government as the parties continue to talk about flags, parades and the past.

The British and Irish Governments are not referees. They are players – needed at the same table as everybody else if the past is ever going to be addressed.

Their role in this is not about encouragement, but about answers.

There is a line in the speech: “This government does not believe in amnesties.”

Read further down and you find the words ‘National Security’ and the ‘burden’ of deciding what is safe to disclose publicly and what must remain secret.

Surely there is an amnesty in that thought – protection for those ‘agents’ who played in the killing games of this place.

Collusion is not about a few bad apples.

Governments, politicians – republicans, loyalists, the State security and intelligence agencies should not be pre-writing the narrative or the script.

And today Ms Villiers did just that in lines of her speech – tried to tilt the balance in a certain direction.

Let an international team do the research, speak to all those who need to be heard and then write the story line of the conflict.

It needs to examine both the what and the why.

It needs to look at the political and social context within which conflict happened.

And it needs the participation of all – governments, politicians, churches, media, republicans, loyalists and those in the worlds of security and intelligence as well as many others.

It’s about disclosure not secrets and the architecture is what both Eames/Bradley and Haass/O’Sullivan suggested.

That means an Independent Commission that starts with a blank sheet rather than a pre-prepared script written to a certain political line.

Today was just clumsy – clueless really, the usual claptrap about the past and moving on.

And there was another development, the news that Kathryn Stone is to leave the Victims Commissioner job to take up another post in England.

The past is a poison chalice and for this reason.

That the play is still about winners and losers, about votes rather than victims and, in that game, people are still being hurt.

Yes, not everybody wakes up in the morning thinking about the past, but they do if they have no legs or an empty chair, to quote someone who spoke to me today.

If Haass and O’Sullivan do decide to write another report – this time their own thinking rather than something that demands five-party consensus – then the governments and the political parties should accept it;

Accept it and let the Independent Commission get on with its work without any further impediment.