You are at:Home»News & Current Affairs»Why government is not taken seriously by Eamonn Mallie
Social share: 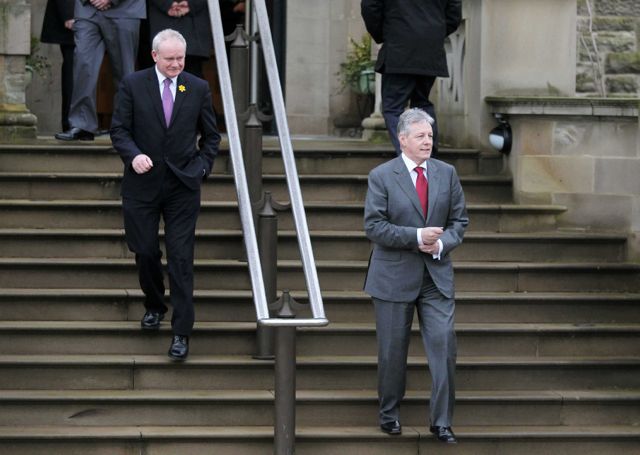 At Westminster there is a coalition government of Conservatives led by David Cameron and Liberal Democrats led by Nick Clegg.

In Dublin there is a coalition government involving Enda Kenny leader of Finne Gael and Eamonn Gilmore leader of the Labour.

In Stormont Castle we have Peter Robinson leader of the Democratic Unionist Party and Martin McGuinness leader of Sinn Fein at the helm. These two leaders are in essence the government of Northern Ireland. The ministers from the other parties Alliance, SDLP and Ulster Unionists are essentially satellite ministers running their own fiefdoms.

When one observes what happens in the London and Dublin governments despite the many differences in philosophy and values there is one constant. We witness government at work. Vince Cable or Michael Gove may well fire off in different directions from time to time in the Cameron/Clegg administration but the coalition government drives the programme for government good bad and indifferent.

One does not sense whether one agrees or disagrees with the tone, direction of travel or policies of the Dublin or London governments that they are not functioning administrations.

This brings me back to Stormont Castle and our so called government. We have two co-equal First Ministers who are endlessly at war over one issue or another. It would be churlish however not to acknowledge the success and delivery by Martin McGuinness and Peter Robinson on inward investment.

To what else can one point as genuine progress for the ‘greater’ good of ALL the people of Northern Ireland? Very little. Sectarianism and bigotry are rampant and reinforced  under this administration. Ministers couldn’t even agree on a common stadium for sport. What we are getting is a continuation of sporting apartheid at Ravenhill, Casement Park and Windsor Park.

This same apartheid obtains when it comes to education. We don’t train our teachers in shared training colleges here. Our doctors train together in the same hospitals and even the police train together but the fundamentals of life in Northern Ireland are being built on sand. We have inherited a divided past and history. Children are imbued with anything but homogeneity in outlook from their mothers’ knee informed by religion, politics, class etc.

Life follows on for the greater part along segregated lines of church, school, sport.

When the so called Troubles broke out many Protestant middle class parents shipped their children off to universities in England or Scotland, many of them not returning. This has resulted in our local universities increasingly nationalist in make-up. This is not necessarily a fault line in these universities but the real strength of university life ought to be diversity and the experience of engaging with others of same and diverse persuasions. This also results in a capacity for tolerance and an acceptance of the other person’s  point of view. We end up deaf talking to ourselves.

This reality is playing out in our society. So many commanding positions in Northern Ireland are increasingly held by individuals from a catholic nationalist background. Examples include the office of  Lord Chief Justice, Director of Public Prosecutions, Chairman of the Bar Council and  the post of Attorney General.

The new Vice Chancellor of Queen’s University Paddy Johnston was on radio the other day talking of his vision for Queen’s. Paddy could have easily done the same interview fluently in Irish.

This is partially down to the outworking of The Education (Northern Ireland) Act 1947 which was closely modelled on the GB Butler Act. The main tenets of that act were that education would be compulsory for all children up to the age of 15. Primary education would end at 11 when children would be assessed by tests which would determine what type of secondary school they would attend.  Facilities such as free milk and dinners would be made available. The funding for the Voluntary (Catholic) schools was raised to 65%.

The inherited practice of patronage or nepotism in the  Protestant working class community in The Shipyard and in Shorts Plane manufacturers  left an awful legacy when the slump happened. Education had taken a back seat in working class Protestant districts. The Catholic Nationalist community snatched at education as the route out of poverty. The 1947 Education Act exploited by the Catholic community is still impacting.

Herein rests the challenge for the people in Stormont Castle. We need big united leadership emanating from the Castle. We need new united thinking addressing values, challenges, concepts aimed at giving us as a society, focus and direction magnetically pulling us all in the same direction – not in opposite directions.

None of this can take place if our First Ministers fail to realise one thing: they are elected to serve and work for us all of us and not for selfish party interests. At that point we will have evidence of a functioning government absent to date.