You are at:Home»News & Current Affairs»Opinion»The art of being British and Irish at the same time – by Brian John Spencer
Social share: 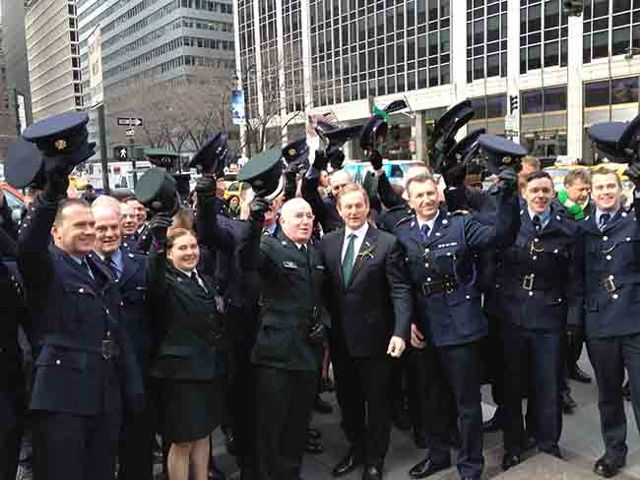 Saint Patrick’s Day is all about celebrating Ireland and celebrating being Irish. Yet in New York, the March 17 parade is “exclusively and explicitly Catholic”. For the organisers, being Irish is being Catholic. This is the Ireland I knew growing up. Not overt, not explicit, not chauvinistic; just there, silent and subtle. To be authentic, orthodox, pure and properly Irish, you had to be Catholic. A Protestant wasn’t a “proper Irish person”. They weren’t Éamon de Valera’s “Fior Gael” (“true Irish”). You just couldn’t reach the higher state of Irishness of the “kindly Celtic people”.

I’ve shared this experience many times, always to be made light of. Yet this perception has been vindicated by recent events.

My first point, the “Irish” in New York have made the “Catholic-only-Irish” formula official. As Fintan O’Toole said, the 5th Avenue parade “is a celebration of Irish Roman Catholic heritage.”  It was put in stronger terms by the Ancient Order of Hibernians, who said that PSNI involvement in the parade represented “a very high-level British plot to destroy the parade and what’s left of independent Nationalist Catholic Irish America.”

A friend and native of New York with an Ulster protestant parent said of March 17:

“It’s one of the few times a year you are reminded of how many Irish immigrants ended up in NYC. The community really comes out in full force [but]there’s not really any concept of non-Catholic Irish in this setting.”

On all levels, Irishness is equated and conflated with Catholicism. This is erroneous and reckless on the part of Irish America on three points.

One, in the land of Thomas Jefferson where the American Constitution guarantees a “wall of separation” between national identity and religion, modern Americans are betraying their founding document by making Irishness dependent on Catholicism.

Two, Irish America is as much Protestant as it is Catholic. Fintan O’Toole said, “Most Irish-Americans are Protestant” and John P. McCarthy of Fordham University said, “The substantial portion of the Irish American population, including many of the presidents… were Protestant.” In Northern Ireland where “parity of esteem” is a hackneyed cliché, I’m saying we need parity of esteem from Irish America.

Three, America is the eminent moral leader in the world. For the world’s leading democracy to have a minority community leadership that is outwardly exclusivist, intolerant and sectarian is incredibly dangerous.

My second point, while things are much better at home on the island, there remains a sizeable number that hold onto de Valera’s Ireland. That being the Ireland and Irishness that is rural, Catholic and Gaelic (and yes de Valera was open to Protestants and appointed them, but they were Protestant nationalists). Closer to home a Facebook user said:

Irish America and Irish citizens may hold onto de Valera’s Ireland, but this is a “fantastic description of a land and a people that never existed.” The reality is that Irish identity is not static and fixed. You cannot take a photo Irishness, but with a moving picture you can. Ireland and being Irish is not the preserve of Catholicism. One does not contradict the other, being Irish and Protestant. As W.B. Yeats said:

Fintan O’Toole has said, Irish cultural nationalism has created “a prison for the Irish people which [has]crippled their true identity. To be Irish was not enough. To be Irish you had to be not British.” By this formula “the choice was to hate England or to be a West Brit.”

Yet as Michael Kirke said, “The [British] constitute [Ireland’s] biggest ethnic group and vice-versa.” To use the words of Martin Luther King, we are caught in an inescapable network of mutuality, tied in a single garment of destiny.

Going forward, as Fintan O’Toole has said, “[A] new [Irish] identity has to be positive rather than negative. But it also has to find a way to include Britishness.”

However, just as you can be a Protestant and Irish, so you can be a unionist and Irish. When George V opened Stormont, he addressed a building full of unionist parliamentarians as “Irishmen”. John McCallister said that being British does not exclude or deny his sense of Irish identity. Alex Kane has said, “[this is what]Unionism should be about; Irish people with a Pro-British outlook.”