You are at:Home»News & Current Affairs»Revealed – lost in a scribble and a scrawl: Brian Rowan on a reference to the OTR letters in June 2002
Social share: 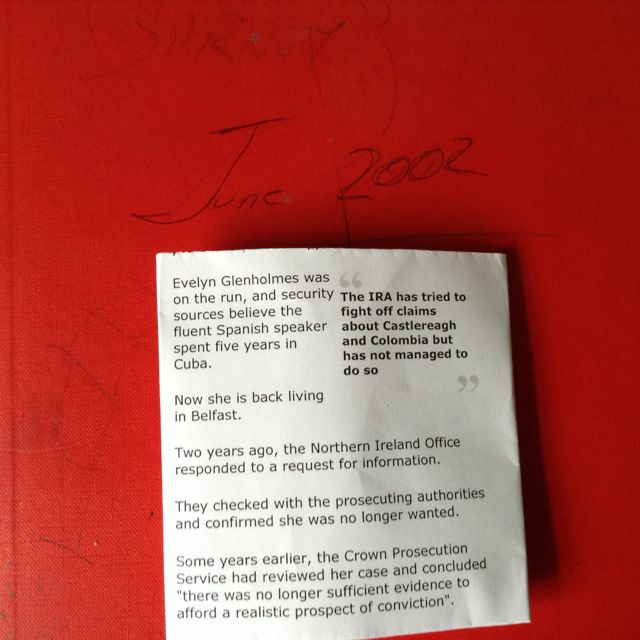 I found it in an old and tattered notebook this morning as part of a continuing trawl through my diaries and other written information going back over a decade.

The note – one of several in the period – is a reference to the Eibhlin Glenholmes case.

Across radio, television and online, the story dominated BBC news coverage on June 13 2002.

Ms Glenholmes was once described under the banner of Britain’s ‘Most Wanted’ but, in those reports, I set out the process leading to her being told that she was no longer being sought by the police.

It involved a request for information to the Northern Ireland Office, a check with the prosecuting authorities, a review of her status and then a response.

At the time, I made no reference to a letter and, in interviews in recent days, said I hadn’t been aware of such correspondence.

My recall was based on what I published and reported at the time – not, these almost twelve years later, on a reference to my actual research notes.

I have now found them.

And, clearly, I attached more significance to the news that the Eibhlin Glenholmes on-the-run case had been settled and the methodology of how that had worked.

The request for information, the check with the prosecuting authorities, the review of the case and then the response.

Did I assume that response would have been in writing? Is that why I didn’t include that specific piece of information? I just don’t know.

Almost twelve years ago, I was also reporting the Glenholmes case in the wider context of a source saying “some dozens” of similar cases had already been settled.

At the time, this for me was the news. 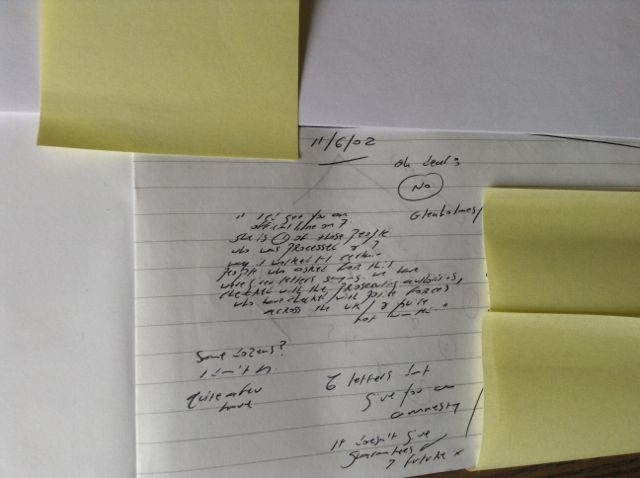 I have written the name Glenholmes and, the source at the other end of the line, is clearly concerned.

You have to remember the context of the period – the IRA link to break-in at the Castlereagh Special Branch office, allegations of arms development and testing in Colombia, continuing battles over decommissioning and the political institutions in constant peril.

The “oh dear” is a response to the fact that I was now about to report an OTR story – and not just the Glenholmes element but the other cases.

I have had to cover part of my notes that we print on this website to ensure my source is not identified.

But, in my scrawl and scribble, I wrote the following: “I could get you an official line on that.

I ask about numbers, and you will see I have written the words “some dozens” with a question mark.

The source responds: “I don’t know [but]quite a few have [been settled]. ”

That figure of some dozens reported in June 2002 stands up  alongside the emerging information of the past week – 41 cases settled by November ’01; 61 by September ’02.

You will also read that I scribbled the following: “These letters don’t give you an amnesty. It doesn’t give guarantees for the future.” 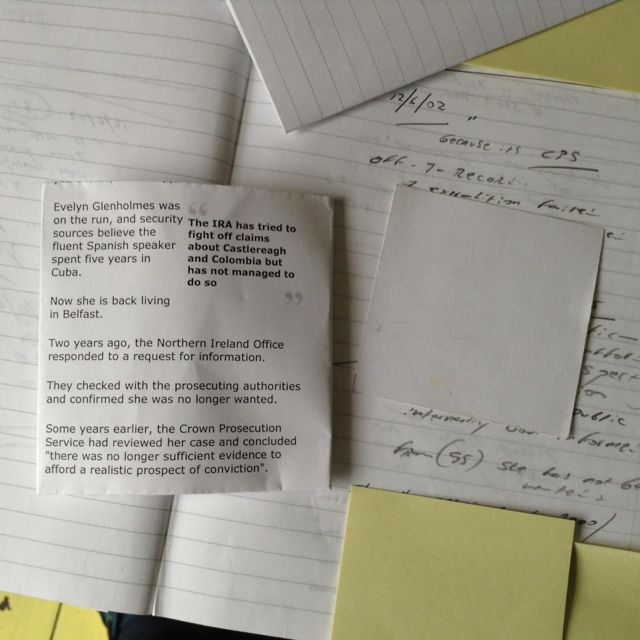 To explain the process in the Glenholmes case, I used a later note (above) taken on June 12 2002.

In what we publish today, I have had to block out much of its content to protect the source of the information.

But this is the note in which the background of Ms Glenholmes return to Belfast is explained.

An extradition attempt failed. Fresh warrants were issued, but in late 1994 the Crown Prosecution Service reviewed the case.

I was told that it was as far back as January 1995 that the CPS had concluded that “there was no longer sufficient evidence to afford a realistic prospect of conviction”.

The information request to the NIO on behalf of Ms Glenholmes was not made until 2000 and, it was later that year, she returned home.

She could face another battle in the coming days.

The Belfast republican is currently a member of the Forum for Victims and Survivors which will meet in special session on Thursday.

In the fallout from the OTR row there is now a suggestion that some are threatening to resign if Ms Glenholmes remains part of the Forum.

There is no possibility of her standing down from her role – and, so, the fallout from the OTR row continues.